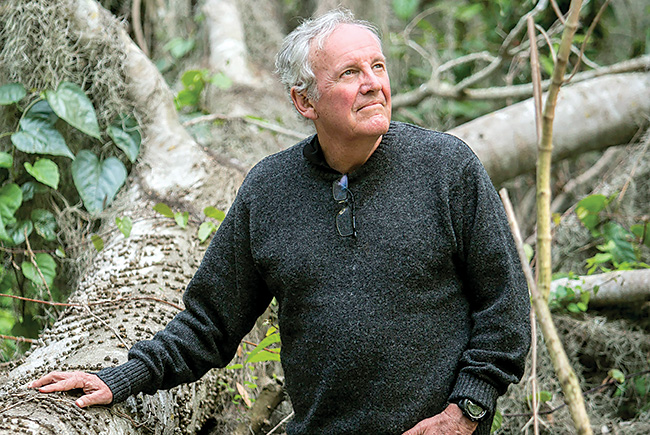 Jeff Klinkenberg is the Florida Trend "Icon" for June, 2018.

By the time I was in high school, I joke I was the founder of the Boys Without Dates Club. I was certainly interested in girls, but perhaps it was the smell of fish on my hands from all the time I spent fishing. We would catch snakes, too, and then you’d have the smell of snake musk on your hands, as well.

I can use Florida as a prism to write about anything.

"Writers are famous for not having confidence. The confidence wasn't always in the writing, but it was in the material. I just feared I didn't have the skill to pull things off." ~Jeff Klinkenberg

In 1951, my parents moved from Chicago to Miami. Like a lot of Floridians, they wanted to make a new start.

This year, I won the Florida Humanities Council’s Florida Lifetime Achievement Award for Writing. That was a huge honor. Previous winners include Carl Hiaasen and Patrick Smith, who wrote ‘A Land Remembered,’ which is the bible to a lot of Floridians. There are so many great writers in Florida.

I wanted to tell somebody’s story as well as it could be told.

The first part of my career, I was a certified workaholic. I went to see a shrink for it. I had to get better at saying no to myself.

When I graduated from the University of Florida, I came back to Miami and was a sports writer for the Miami News, which was an afternoon paper that is no more. It was great place to be a young journalist. It was already starting to fail, but there were lots of talented people there, and it had a touch of the Front Page era, so I witnessed fistfights and drunkenness and gambling in the newsroom.

I can still find things that excite me. If I see a snake, I’m a happy boy.

My parents were not educated people, so there weren’t a lot of books in the house, for example, but they were newspaper readers. Back then in Miami, there were two daily newspapers and community newspapers. They were always reading, so I valued newspapers.

I’ve been in a number of hurricanes, including a couple of big ones when I was a kid. Of course, I went down to Miami after Andrew. I know what a Category 4 or 5 can do, and I don’t want to be there for that. A Category 4 or 5 is just beyond belief.

John McPhee was a great influence on me.

When I was growing up, I was a crazed Florida boy who was fishing and doing all that outdoors stuff. I went to parochial school — parochial school during the boxing nun era — and I couldn’t pay attention. I used to joke that I invented the rope-a-dope. I wasn’t a bad kid. I was just looking out the window, wishing I was someplace else.

In retrospect, my childhood was magical. I grew up like Huck Finn.

I’m really appalled by this narrative of weird Florida. Some of the ‘Florida Man’ stuff and the ‘Weird Florida’ stuff — some of it I have to admit I laugh at — but a lot of it after a while strikes me like dumb blonde jokes or Polish jokes or whatever. It just seems like it’s cruel stereotyping.

My dad had been a competitive swimmer in high school, and he liked to do these long open swims on the beach, and when I was old enough — I had a little mask and snorkel — and I’d hang onto his trunks and he’d swim along the beach. The Atlantic is much more clear than the Gulf, and it was like looking down into an aquarium.

I was looking for stories that just seemed authentic. I wasn’t going to write necessarily about Disney World. I knew out there, away from the interstates, there were these things that were happening that you might not see anywhere but in Florida — the critters, the woods, the food, the art, the music. When I started to write those stories, I was like a blind dog in a smokehouse. Wherever I snapped, there was something meaty that I could write about that, most likely, nobody had written about before.

We drove around, and we saw our first swallowtail kite of the year — they’re coming up from South America — and so I knew it was spring.

I started reading because I was interested in fishing. I started reading Vic Dunaway in the Miami Herald. He was the outdoors editor. I remember reading him as a kid and thinking, ‘My God, that has to be the best job in the whole world.’

I like people. I really feel I can talk to people.