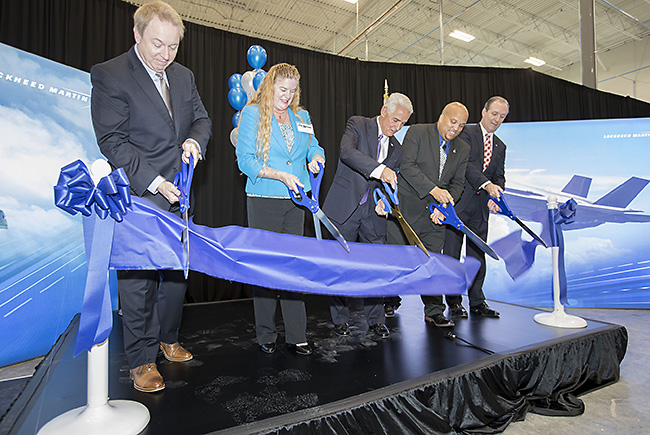 PINELLAS PARK -- Elected officials and business community leaders joined Lockheed Martin (NYSE: LMT) today in the formal opening of a new manufacturing facility that will create more than 80 new jobs by mid-2019. These new jobs are in addition to the 30 Lockheed Martin jobs added late last year to support the increasing F-35 production rate. The facility is expected to be operational by mid-May.

"Keeping America safe and growing Florida's economy are intertwined," said U.S. Rep. Charlie Crist. "The Lockheed Martin Pinellas facility exemplifies that dynamic, a center of excellence for manufacturing in our own backyard. We're proud of the men and women who work here, producing key components for the most powerful fighter jet the world has ever seen. The F-35 protects U.S interests abroad while returning our pilots home safely."

Lockheed Martin currently employs approximately 270 people at the Pinellas Park operation. The new facility will assemble canopies and bulkheads for the F-35 Lightning II program. The expanded work is a result of the rapid growth of the F-35 production program. The facility, located in Pinellas County, adds 65,500 square feet of manufacturing and office space and is expected to begin delivering parts to the main F-35 production facility in Fort Worth, Texas, by mid-summer.  In 2018 alone, the Pinellas facility will deliver more than 200 F-35 components to support production and sustainment of the growing F-35 fleet.

"This is an exciting day for us in Pinellas Park," said André Trotter, program director and general manager of the Lockheed Martin Pinellas Park operation. "Continued growth and success of the F-35 program is vital to our national security. The hard-working men and women who produce critical components for the F-35 program are what make all of this possible."

Across Florida, Lockheed Martin operations employ about 14,400 people. In addition to the new jobs in Pinellas Park, Lockheed Martin recently announced an additional 500 jobs by the end of 2019 in Orlando. Work on the F-35 in Florida includes 97 businesses employing nearly 22,500 direct and indirect jobs.

The F-35 provides economic stability to the U.S. and allied nations by creating jobs, commerce and security and contributing to the global trade balance. In 2017, the F-35 program had more than 1,500 suppliers in 46 states and Puerto Rico, employed more than 194,000 people (direct and indirect), and generated an economic impact of over $31 billion. As the program reaches full rate production, there will be an increase in jobs and economic impact.

With stealth technology, advanced sensors, weapons capacity and range, the F-35 is the most lethal, survivable and connected fighter aircraft ever built. More than a fighter jet, the F-35's ability to collect, analyze and share data is a powerful force multiplier that enhances all airborne, surface and ground-based assets in the battlespace and enables men and women in uniform to execute their mission and return home safe.

Headquartered in Bethesda, Maryland, Lockheed Martin is a global security and aerospace company that employs approximately 100,000 people worldwide and is principally engaged in the research, design, development, manufacture, integration and sustainment of advanced technology systems, products and services.