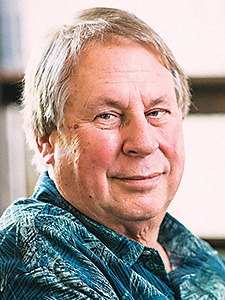 We lived in Pensacola in 1957, just after the Montgomery bus boycotts, and when my grandmother would take me into town, she’d always insist that we sit in the back of the bus. I can remember all the whites in the front looking at us. Obviously, I was young — about 8 or 9 — and I really didn’t fully comprehend what was going on. Later, I was very proud of my grandmother for doing that.

The fact that Tallahassee is so far away means that Florida’s political center is not anywhere near the center of the state. There is no center, really. It’s centrifugal, so I think Gene Patterson’s idea to buy Florida Trend (Times Publishing purchased the magazine in 1980) and its statewide voice was really right. He was trying to get over the parochialism that we’ve often associated with parts of Florida.

Florida has a very heavy frontier heritage. It was underpopulated for so long. It didn’t have much in the way of legal culture. Almost everybody was from somewhere else. Even today, only about 35% of Floridians were born here. The average state is 64%. So, Florida has become a place to reinvent yourself, kind of a last chance if you’ve failed somewhere else. Florida attracts people who take risks, which, I think, widens the state’s spectrum of potential behavior.

I just shudder to think what the cultural life of Florida would be like without the Florida Humanities Council.

Florida’s a fascinating place, a place you can root for because it has so much potential. There’s all this wacky, weird stuff, but there are also people here who really care. We have some of the best environmentalists in the country, for example, who really see how endangered the nature of Florida is and how fragile the ecosystem is.

My father was in the Navy when I was a little kid. He was a chief petty officer and then he became an officer the last 10 years of his career, and we were constantly moving. I went to 12 different schools before I graduated from high school. It was kind of a crazy quilt. I think one year I went to three or four different schools.

When I need a mental health break, I’ll go to Fort DeSoto Park and walk on the beach.

I love the Highwaymen painters. It’s such a great Florida story, these sort of self-trained artists, selling these paintings out on the road for $5 or $10. Most of those paintings are worth a couple thousand dollars now.

Trump, I have to say, I’ve never experienced anything like this. I feel like I survived Nixon and Reagan. I survived George Bush, thinking that was the low point of the American presidency, but I was so wrong. Trump, who knows where this is going? It just seems like every day you wake up and there’s another reason to be clinically depressed.

I’ve often said to my students, just to get them riled up, that we have to figure out a way to get 7, 8, 9 million Floridians to leave because the ecosystem just can’t bear all these people.

Many of the students that I’ve had over the years have gone on to be teachers. I think half the history teachers in Pinellas County were my former students. I’m very proud of that.

Sunday mornings, I play tennis on the old clay courts at Bartlett Park. That’s where Chrissie Evert won her first state tournament. Arthur Ashe played there in 1969. I was a good basketball player, but I’m not a very good tennis player, but I love playing tennis. It’s a game you can play your whole life.

I think the gun situation is probably the most troubling thing right now. This sort of gun-nut culture, with Mrs. Marion Hammer, it’s just outrageous. Now, they’re talking about allowing guns on campus. The day that someone brings a gun into my classroom is the day that I retire. It’s just so frightening and ridiculous.

I’ve had Type 2 diabetes for almost 20 years. I’ve lost a bit of weight, but I need to lose another 30 pounds. I do swim a lot, play tennis and go to the gym almost every day, but I love to eat — bread, ice cream, huge hunks of meat.

The Freedom Riders book changed my life. It succeeded beyond anything I ever could have imagined. I worked eight or nine years on it. The book kind of rediscovered the Freedom Riders, and it was so satisfying because they were all but forgotten. Historians didn’t put much stock in the Freedom Rides as a milestone, but I think I convinced everybody that the rides were a huge turning point in terms of the beginning of the ’60s and direct action and ordinary people doing extraordinary things.

I loved geography and maps from the time I was a little kid. I used to memorize the Almanac. One of the things I did was memorize all the populations of all the cities in the United States over 100,000, according to the 1950 Census. I knew them all. Then, of course, the 1960 Census came out, and I nearly had a nervous breakdown.

John Lewis has become a close friend, along with many of the other Freedom Riders. We were on Oprah together and went on tours through the Deep South. I just feel so lucky to have known them.

Florida’s not really a red state. It’s a blue state — but it comes out a red state because of gerrymandering. I’m optimistic, though, that Florida will be a blue state in the near future.