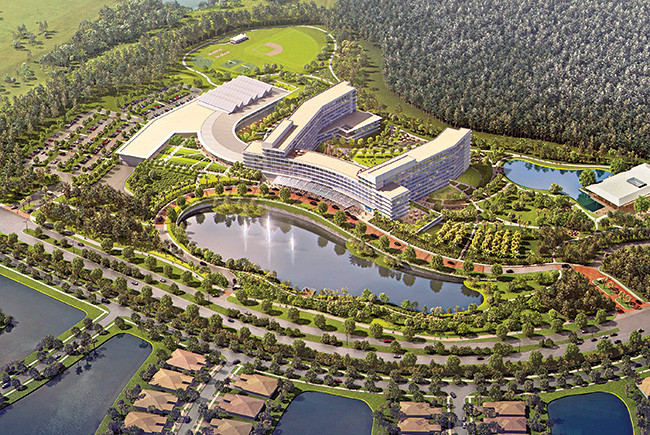 KPMG’s $430-million Lake Nona campus is expected to be completed by the end of next year. 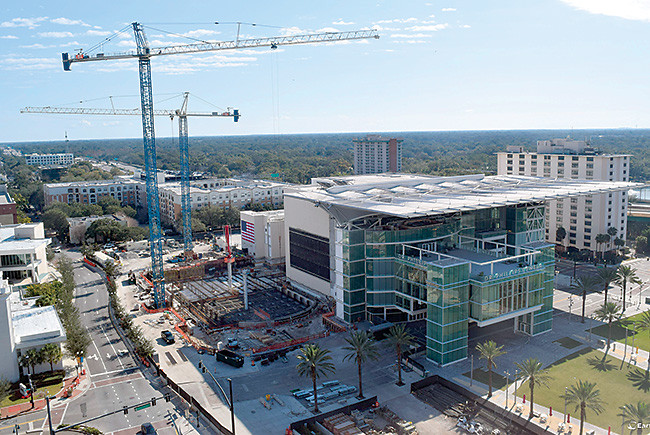 Phase two of the Dr. Phillips Center for the Performing Arts will include a multiform theater and a large rehearsal room with performance space. 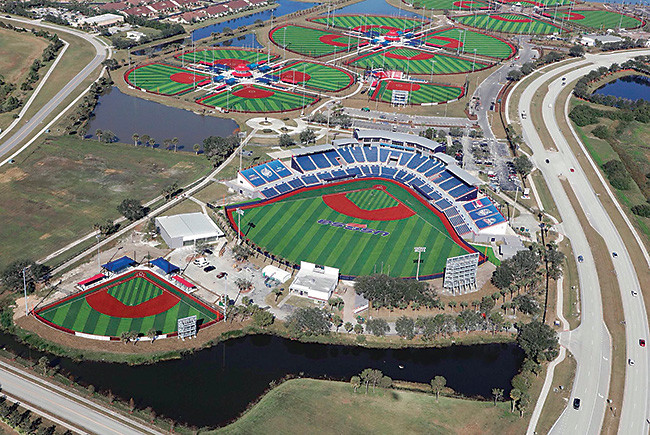 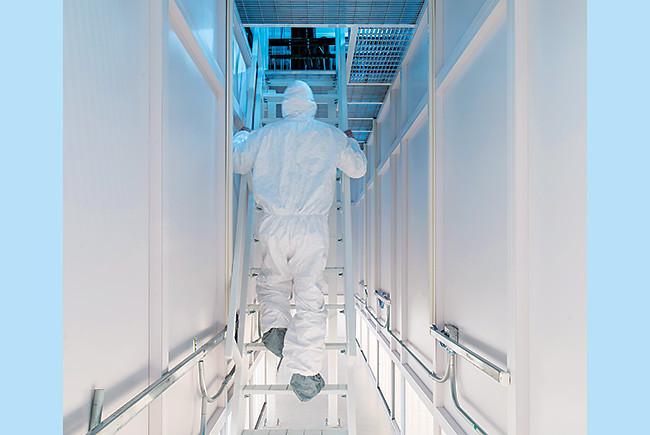 BRIDG’s clean-room manufacturing facility is expected to be operational this summer. 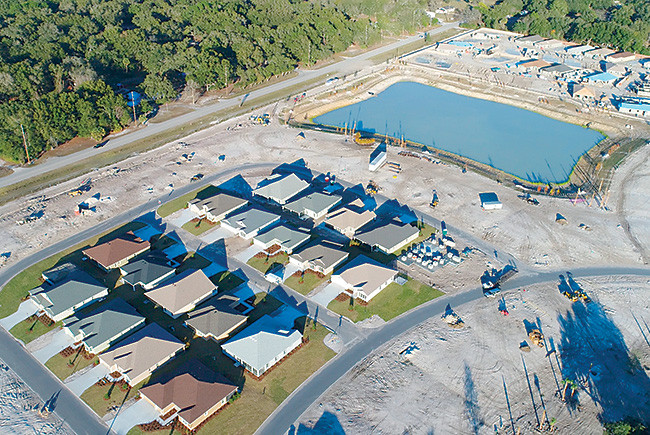 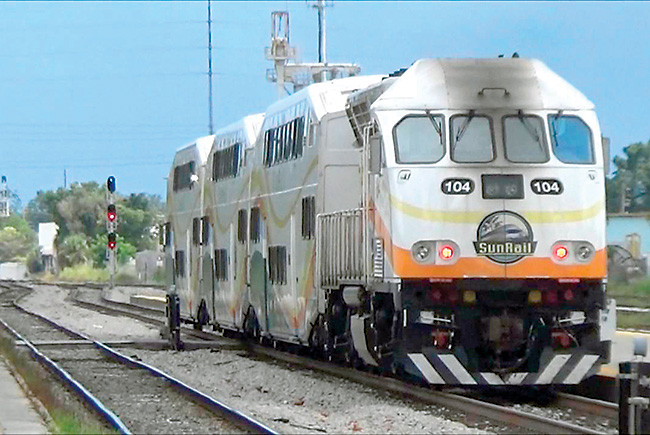 Central Florida: In 2018, economic strengths and challenges, people to watch

Orlando and Orange County have climbed into the top ranks among large cities in job production. In January, Orlando had the highest job creation in the state for the fifth month in a row. Lockheed Martin Missiles and Fire Control is set to bring 500 highwage jobs to Orange County along with $200 million in investment. KPMG is investing $430 million in its new 55-acre state-ofthe- art training center in Orange County and bringing 80 high-wage jobs to the community along with 250 contract positions. Amazon’s new fulfillment center near Orlando International Airport expects to hire 1,500 full-time workers.

Orlando kicked off construction of the final phases of the Dr. Phillips Center for the Performing Arts, with a total expected price tag of $600-million-plus. The final grand opening is scheduled in 2020.

Orange County’s extensive network of parks grew last year with Pine Park. Incorporated in the park are braille signs for the visually impaired and ramps and swings for children who use wheelchairs.

Seminole County remains a leader in recruiting highpaying jobs. Even as land for development has grown more expensive, announcements of expansions continue. At the end of 2017, Superion, a software company, announced it was planning 355 jobs at its Lake Mary offices, investing $12.3 million in office expansion and build-out in three years. Wages will reportedly average $55,177, excluding benefits. The software company works for city, municipal and county governments. Seminole and Lake Mary goosed the deal with a local incentive package of $355,000. The corporate presence has helped boost business at the county’s airport as well. Orlando Sanford International Airport moved up to the fifth-most-active airport in Florida. Seminole County’s K-12 school system is top-ranked in the state, creating another carrot for corporate recruitment.

Businesses that expanded in 2017 included the B. Braun distribution center in Daytona Beach, Security First Managers headquarters in Ormond Beach, Boston Whaler headquarters in Edgewater and 3D Material Technologies and Brown & Brown headquarters, both in Daytona Beach. The investment from those businesses is projected to exceed $144 million and create more than 950 jobs. The county has more than 13,000 enterprises that contribute $15 million to the area’s economy.

Osceola County enacted a six-month moratorium on residential construction, stalling the rapid development that had boosted Osceola to the 18thfastest- growing county in the country. There are exemptions to the moratorium, including developments that already have commercial zoning, approved planned developments, affordable housing developments, mixed-use projects and new transit-oriented developments. Home builders, who are facing scarce lot choices in Orange and other counties, worry about finding lots to meet demand.

County leaders see technology as part of its future path. BRIDG, a clean-room manufacturing facility for advanced semiconductor designs for micro-electronics, nano-electronics, sensors, fiber optics and photonics, is expected to be operational this summer. That will dovetail with NeoCity, a 500-acre technology district master plan.

The region spent $30 million to upgrade Space Coast Stadium, the former spring training home of the Washington Nationals. In January, 15 artificial turf ballfields in Viera opened for tournament play for its new tenant, the U.S. Specialty Sports Association. The sports governing body is expected to boost the use of the stadium from 15 games a year to 45 to 50 weekend or weeklong events a year. USSSA’s contract guarantees its events will generate at least 75,000 nights a year of hotel room rentals in the first three years of operation and 100,000 nights a year beyond that. The county’s investment in the upgrade was $10 million, funded by Brevard County’s 5% tourism development tax.

Lake County made considerable progress last year putting together new road networks and plans for others that will open back doors into the county’s rural southern and eastern boundaries with the extension of the Wekiva Parkway. Three planned roads will connect SR 429 along Disney to U.S. 27 in south Lake County, making it more accessible for commutes to Orange and Osceola job centers. The county also settled a dispute that delayed development of the 25-square-mile Wellness Way, which abuts Orange County’s nearly built-out Horizon West and Disney on its east side. Another new access into rural Lake County also opened in 2017, a new exit off the Florida’s Turnpike at Minneola, just north of Clermont.

In Sumter, tract homes continue to displace what once was agricultural land. The trend is expected to continue as The Villages marches south across SR 44, with homes on non-contiguous land. Between October 2016 and September 2017, 1,231 newhome permits were issued to The Villages, with 306 outside the development. The new rooftops are sparking commercial development as well. Some 240,000 square feet of new commercial space inside The Villages and 485,000 outside popped up last year.