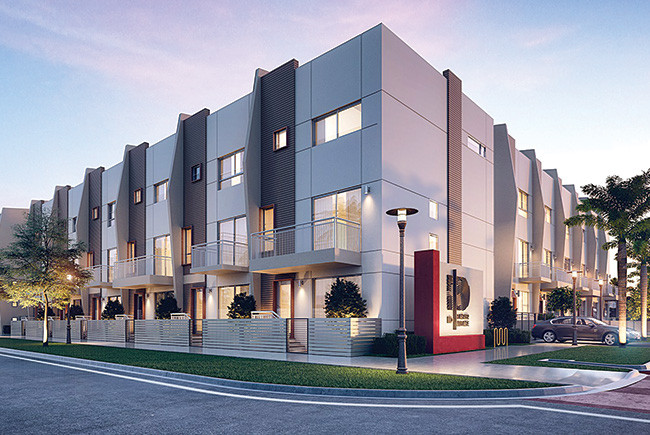 Rents at ID Flagler Village start at $3,500 a month. The complex is close to a new Brightline station. 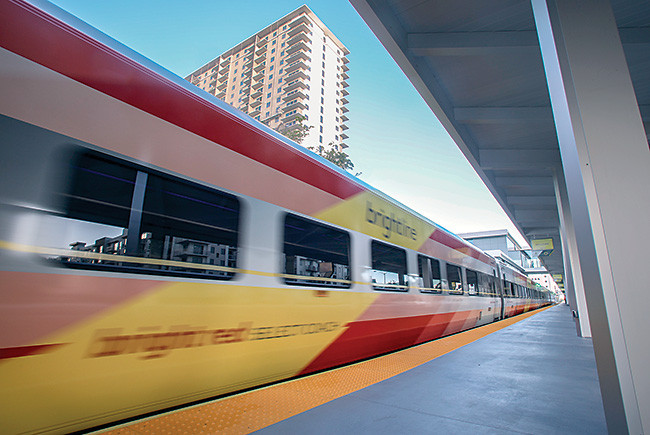 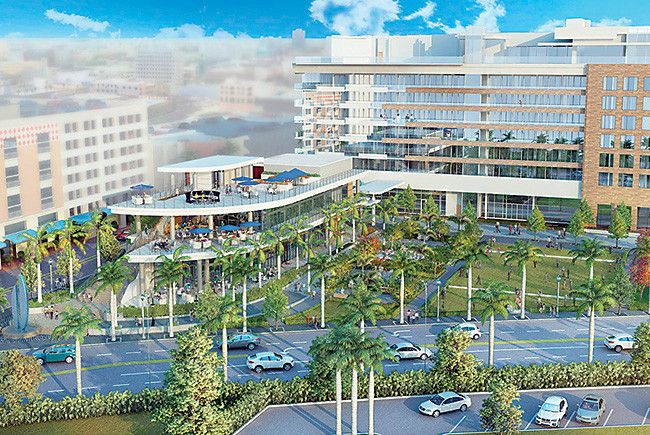 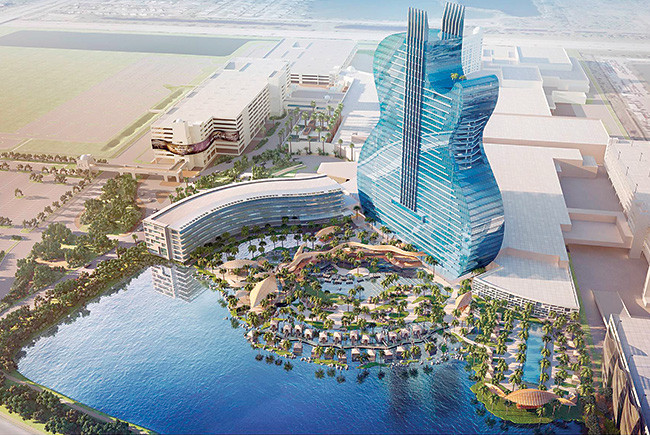 A 38-story guitar-shaped hotel is expected to be topped off at the Seminole Hard Rock Hotel & Casino this year. 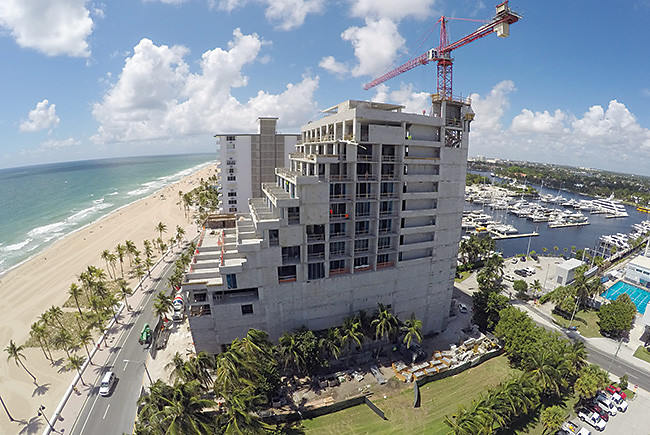 Southeast Florida: In 2018, economic strengths and challenges, people to watch

Broward County’s long-running governance embarrassment continues to dominate the public health stage. The taxpayer-supported North Broward Hospital District, which operates under the Broward Health brand, saw four current and former board members plus a general counsel charged with the misdemeanor offense of violating open meetings laws, the latest in a litany of troubles for a system with a history of insider dealing and politics. There’s talk of turning the system over to its wellrun south county counterpart, Memorial Healthcare, or to a private hospital company. Linda Quick, a consultant and retired longtime leader of the South Florida Hospital and Healthcare Association, says the overall condition of the district “is unfortunate. There are people who are working hard there every day in every way to make sure patients get treated right. It’s hard for them to do their job with this level of uncertainty.” The district this year hired a new CEO, Beverly Capasso, who was indicted on a sunshinelaw allegation.

Fort Lauderdale has enjoyed many a real estate up-cycle, but the downtown building boom under way is truly a transformation. Buildings are now going up in the 40-story range, development is moving north up U.S. 1, there are new hotels, the first new downtown office tower in years, along with restaurants and other signs of a resident-driven downtown.

According to the Downtown Development Authority, downtown Fort Lauderdale now has 17,097 residential units built, under construction or approved and another 2,384 proposed and under gov ernmental review. The Flagler corridor, long just an unrealized promise, is seeing its own boomlet. Jeremy Bedzow, managing principal of Fort Lauderdale developer Ceiba Group, says the downtown now has a critical mass of residents, which brings a mix of retail, from food to yoga and fitness, that’s leading to more population growth. “That’s how cities develop,” he says. His ID Flagler Village, a few blocks from the new Brightline station, has 24, three-story rentals starting at $3,500 a month.

The state over the next few years is extending I-95 express lanes that already run from Miami- Dade to Broward Boulevard northward into Palm Beach County. Express lanes also have been added to I-75 from the Palmetto Expressway to I-595 in Broward. The Brightline privately owned train began running this year to West Palm Beach. Still, the typical Broward commute is 28 minutes, two minutes more than the national average. The Browardto- Miami ride is the 14th-worst in the nation, and the region is the most congested in Florida. Public mass transit ridership regionally is down, not helped by long rides, unreliable schedules and having to stand in the heat waiting for the bus. A positive development: Newly elected leaders in Fort Lauderdale may kill the proposed $195-million downtown streetcar. Construction bids indicated the tab would have risen as high as $270 million for a 2.8-mile system conceived before ridesharing companies came on the scene.

It’s been nearly three years since developer Navarro Lowrey won the right to redevelop the former West Palm Beach City Hall site downtown. Construction began in February, and firm principal Frank Navarro says the project will be finished in the second half of 2019. The $145-million project will include a 210-room Marriott Autograph Collection Hotel, the first waterfront-facing hotel property built in generations, 251 luxury rentals, a restaurant, retail and a garage. “Certainly the hotel is the centerpiece of the project. They wanted a hotel on the waterfront, which we are going to deliver,” says Navarro, a West Palm Beach native.

The waterfront project is just one in a thriving downtown. The new Brightline rail station bridges a Clematis Street-centered historic downtown with 17-year-old CityPlace, which will undergo a needed remake from developer Related. Clematis still has its struggles with yesteryear building layouts. But there’s plenty of attractive street-side retail and restaurants — like Rocco’s Tacos and Tequila Bar, part of a locally owned chain — along with downand- out people and properties. A rising residential downtown is typified by Flagler Investors’ Bristol, a 25-story, 69-unit luxury condo on the waterfront topped off in January.

Three of the 10 poorest cities in Florida are in Palm Beach County’s Glades area on Lake Okeechobee. Unemployment there runs four to five times higher than the county as a whole. During the recession, unemployment ran more than 40% and recently still ranged from 15.5% to 27% in the three cities. Plans to bring jobs with a recycling facility, a candy factory, a Guy Harvey Outpost Resort and fertilizer plant all failed to come to fruition for different reasons “Very tough market and conditions out there, but we are going to keep trying,” says Kelly Smallridge, CEO of the Business Development Board of Palm Beach County, the economic development group that’s working with CareerSource Palm Beach County, local elected officials and others. Bright spots: Packing products company Tellus is hiring for its new a 120,000-sq.-ft. factory; rehab facility Passages is expected to hire 225 for its site at a renovated Lakeside Medical Center, and there still are hopes for an inland logistics center. The state, as part of a planned reservoir near the lake, has promised to provide non-agricultural job training and education. CareerSource Palm Beach County, which recognizes the “critical service needs” in the area, has fostered a “buy local” effort that’s led to $25 million in purchases from Glades businesses, has worked to train local young people for skilled work, including by developing a construction preapprenticeship program and helping young people get their GEDs, credentials and experience. CareerSource says it’s placed more than 8,400 Glades area residents in jobs since mid-2011.

County leaders say housing costs are tough on many workers and create second thoughts for businesses interested in relocating to the county. It doesn’t help that the Palm Beach County Housing Authority executive director was sacked last year after allegations of mismanagement, ethical violations and financial malfeasance. Some say the opioid epidemic has made labor scarcer and more expensive, driving up construction costs. But governmental rules also drive up the cost of housing — 25% of a house’s costs are mandates and fees — and last year county commissioners shot down a project in the county’s traditional agriculture area that would have seen the development of price-capped rentals.

The county is looking at tweaking rules. “We need workforce housing,” McKinlay says. “I do think as local elected officials we need to work with the private sector to make that happen.” But, she adds, “I’m not ready to give it all away.”

It’s worse to the south. Miami- Dade’s gross rent is unaffordable for 89% of households there (vs. 78% in Broward.)

Scott Deal: The founder and CEO of Maverick Boat Group led a groundbreaking in January for a 106,000-sq.-ft. factory that will build Cobia boats. The new factory means hiring an additional 100 workers and probably another 120 to 150 after that. The company, which makes Maverick, Cobia, Pathfinder and Hewes boats, already employs 287.

Chris Nielsen: Nielsen founded Levatas in his Jupiter garage. Now based in Palm Beach Gardens and numbering more than 100 employees, the company provides digital services to businesses such as IBM, Dell and Office Depot. Among other employee perks and workplace quirks, Levatas brews its own beer for staff and clients. Its artificial intelligence and data and analytics teams increased their revenue more than 10% year over year.

Ted Christie: Christie this year became president of Spirit Airlines and is slated to take over in 2019 as CEO, succeeding Bob Fornaro. Ultra-budget Spirit, based in Miramar, grew big fast on a pioneering model of offering bargain airfares while dinging customers for every conceivable item beyond the actual seat.

Broward College President: The search is on to replace Broward College President J. David Armstrong Jr., 60, who retires in June after 10 years at the college and a total of 33 years with the Florida College System, of which he was chancellor before joining Broward. During Armstrong’s time at Broward, enrollment increased from 47,111 to 64,097. It began offering bachelor’s in 12 fields and was twice in five years designated a “Top 10” college by the Aspen Institute.

Earnie Ellison Jr.: A longtime executive at PGA of America and before that IBM and Unisys, Ellison has his own Ellison Consulting Group that fosters diversity on the business side of sports, bringing more women and minorities into the C-suite, boards and as suppliers. “It’s very challenging to get sports organizations to see the need for diversification, especially at the business management level,” says Ellison. John J. Doyle: The developer this year completes phase one of Hobe Sound Station on U.S. 1 in Hobe Sound. The mixed-use project includes restaurants, a salon spa, liquor store, bank and other commercial tenants. A second phase comes in 2019. He also breaks ground this year, with delivery in 2019, on Seminole Bluff , a 20-unit condo on the St. Lucie River in downtown Stuart where units run from $1 million to $2 million.

Michael Rechter: Coming off the successful late-2017 opening of his company’s America Icon Brewery in a National Register of Historic Places building in downtown Vero Beach, Rechter this year completed the renovation of the old Post Office downtown into a restaurant, Post & Wine, a salon and a third tenant-ready space. He already redeveloped four other smaller downtown properties. Meanwhile, along U.S. 1, his company over the last 10 years has been upgrading the 500,000 square feet of retail it owns at the Majestic Plaza and Indian River Plaza.