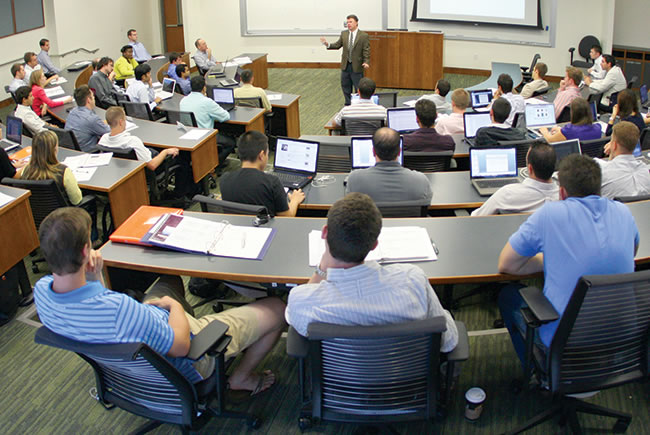 From narcissism to race and gender, 10 MBA professors study what it takes to run a successful business.

How important is a banker’s social network to his or her success? How do personal connections and social networks in the global banking system affect decision-making? Are bankers more likely to partner with bankers or those who attended the same college or with those who drive decisions on a corporate board? These questions have driven much of Joel F. Houston’s work.

“Knowing people helps do business better,” says Houston, the John B. Hall chair in finance at the University of Florida Warrington College of Business. “Soft information and friendships and networking can be very valuable.”

Economics is a blend of art and science, where policies can have different implications depending on who is affected, says Houston, a double major in economics and government who earned a master’s from Franklin and Marshall College and a doctorate from the Wharton School at the University of Pennsylvania.

Since arriving at UF from a post as an economist with the Federal Reserve Bank in Philadelphia three decades ago, Houston has won 25 teaching awards. Two textbooks he co-authored are among the leading finance textbooks used by undergraduates and executive MBA students

Houston looks back on the January day when he and his wife, then newlyweds, decided to give UF a try for three years. That was 1987, he says, “and three years became 30.”

To study a business or industry is to explore the psychology of those who run it, says professor Michael Holmes. As the Jim Moran Associate Professor of Strategic Management at the Florida State University College of Business, Holmes explores executives’ personalities, experiences, demographics, psychographics and compensation — and how those factors influence their performance. How does an executive’s age, optimism level or even narcissism impact decisionmaking? he asks.

Holmes, 39, stumbled upon behavioral psychology as a doctoral student at Texas A&M studying business strategy. In his classes, Holmes applies his years of experience at companies such as Gulf States Paper and Acuity Brands to drive home lessons. He also uses examples of strategies gone awry, whether from Volkswagen, Wells Fargo and Enron, or marketing gaffes, as when Gerber used the picture of a baby on the labels of baby food it tried to market in Africa — where labels typically portray ingredients.

“I come alive when I’m in front of the class. I watch their eyes and see when they connect with a concept,” says Holmes. “I can’t expect them to watch me lecture. I don’t even lecture. It’s a lot of question and answer. I don’t know how to teach any other way.”