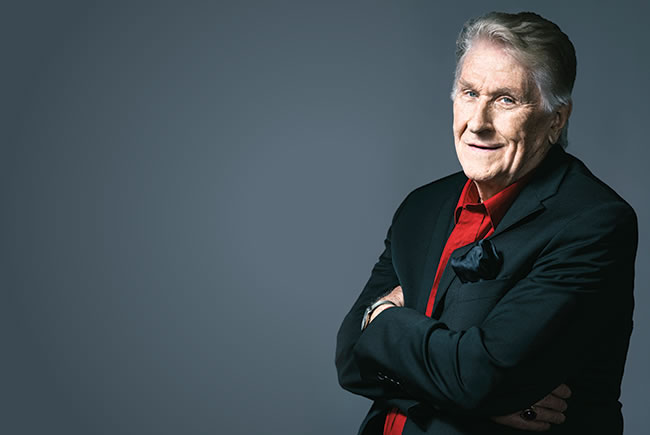 Sherrill Milnes is a ‘Florida Icon'

» A laryngologist can’t look at your throat and say, ‘Oh, you’re good.’ They can’t. They don’t know. Singing is a mystery, and that’s one of the wonderful things about it.

» I grew up on a dairy farm in northern Illinois. Wintertime there — that’s part of the reason I like Florida — 15 degrees below zero, milking cows, bare hands, manure. I mean that’s down and dirty stuff.

» In college, my freshman year, I was pre-med. Hard curriculum. I didn’t have time to play my violin in an orchestra or sing in my mother’s church choir. When I didn’t have music, that’s when I realized how important it was to me.

» I tried hard to be the best in the world. As I’ve told various younger baritones, I made it as hard on my successors as I could.

» I’m a full stomach singer. There are lots of singers who don’t want to have a big meal before a performance, but I did. Otherwise, I would start to get weak. Probably 5-5:30 p.m. before an evening performance, I’d eat everything I could cram in, including milk and ice cream, all of that stuff that some singers stay away from.

» We often are singing in a language that we don’t speak and for an audience who also doesn’t speak it. That’s a huge load to carry for a singer.

» I have music education degrees. I just took off 42 years to sing around the world, but now I’m doing exactly what I trained to do — and that’s teaching and working in our VOICExperience programs.

» Social media. People tend to believe what they read, true or not.

» People think, from farm to opera, how does that happen? Well, that’s a fair question. It does seem like a stretch. But music was always such a big part of my family. So, for me personally, it wasn’t a stretch.

» Everybody gets better if they study. Not just music. Anything.

» I was called the Bari-Hunk. I was attractive, over 6 feet, but among the various levels of stardom, opera is pretty far down on the list. Tony Randall was my friend. I sang at his funeral. I also got to know Burt Lancaster. He was a big opera fan. I got to know him the last 10 years of his life. Now, he was really famous. Tony was famous, but he could go into a restaurant and he could eat. But Burt, he would only go to restaurants where he either knew the maitre d’ or the manager. He’d go in the back door with a baseball cap pulled down and sit way in the back. Otherwise, he could never eat. There’d just be a line to get his autograph. That’s fame. I was a schmuck — and I had no problem with that.

» My wife (Maria Zouves, an opera singer and teacher) is Greek. She’s from Pinellas County. The sponge docks in Tarpon Springs, we enjoy going there. The most authentic Greek restaurant? Mykonos. It’s a dive, but it’s great food. And right across the street, Dimitri’s on the Water.

» Inhibition is the bane of a singer’s existence

» A teacher inspires within reality. As a teacher, if a student is not terrific, you can’t say, ‘You suck. You’re terrible. Go away.’ The old-timers used to do that, but I could never do that. At the same time, you would be totally dishonest if you said. ‘You’re great’ and they’re not.

» Performing on stage, I loved being there, loved the music, but when the big aria was coming up, my heart started beating faster. Was I immune to nerves? Oh, no. I was as nervous as the next guy. Or maybe more.

» Florida’s great, notwithstanding the occasional hurricane.

» Always, I loved teaching. In fact, every time I did a recital or an opera somewhere, which is 42 years of earning a living singing, I would do a master class. At the beginning, I would just do them for nothing — just throw it in — with the idea that at some point I would start to charge. I was not totally dumb. So now as a teacher, I’m expensive. Fame as an opera singer does give you more cache.

» Do something. Even the wrong something is better than nothing.

» Words don’t mean anything when you describe a voice. Golden? Shimmering? Silver? Yuck. What do they mean? Warm. What does warm mean? It doesn’t mean anything. You can use all the words in the world, all meaningless. You have to hear.

» You ever see vocal folds? Ugly. Oh, man. It’s amazing that beautiful sounds can come from those ugly little things.

Below is a video of Milnes singing an aria from Rigoletto (undated). More videos at sherrillmilnes.com.