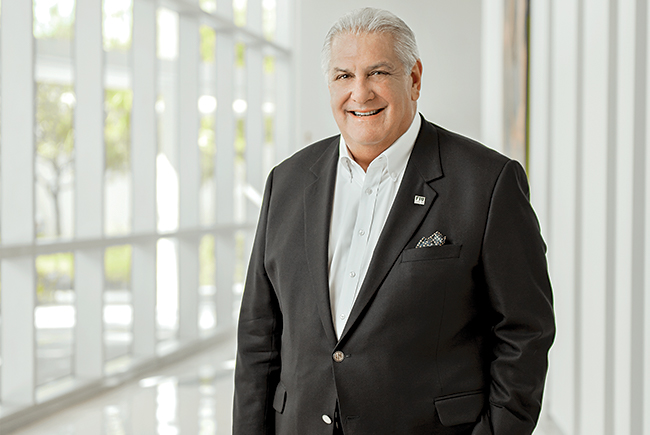 The disparities in this country are embarrassing. For example, there are some ZIP codes in Dade County and within a mile of another ZIP code, there’s a 20-year difference in survival. It’s something hard to imagine when you live in a country that has so much.

Starting halfway through the first year, our students are assigned a household in one of the poorest areas of Dade County. They have an interdisciplinary team, which consists of law students, social work students, public health, nursing, education students. The students assigned this household are responsible for this household until they graduate. Our students actually get longitudinal experience in taking care of family and patients for 3½ years instead of your traditional six- to 12-week rotation.

I’m Catholic and was educated in Catholic school, and that was about social justice. Social justice isn’t about saying, here, I’ll give you a piece of bread. It’s about making someone’s life better.

Very traditional in Cuban culture, the father said it and that was it. My mother wouldn’t permit that at all. I was brought up in a family where everything was about discussion. My father went right along with it. The discussion was very animated. Why is this going on in the world? What happened today in school? What are you going to do to resolve that? You had to defend yourself one way or another.

I married way up, believe me.

Like my mother said, even if you don’t deserve it, don’t return it. The Presidential Medal of Freedom was very cool. I have to let you know that when I announced this to my wife and kids, they thought I was kidding. They said really? With Muhammad Yunus and Desmond Tutu? You’re not even close.

I live in Coral Gables, the city for the financially gifted.

My little sister who was at the University of Florida was driving down to spend her 18th birthday with me and was killed in a car accident. It taught me how someone felt when they lost somebody that they loved. At my sister’s funeral, this bus of all these elderly people showed up because she used to volunteer with the elderly. I said, ‘wow she did more in 18 years than most people do in a lifetime.’ It’s what you do daily. It really is that simple.

My dad came from nothing and became the first Hispanic president of a medical association. He never moved from Westchester. On my father’s side, we’re Greers, so were Irish. It’s actually Scots-Irish. I always tell people I’m Cubish, Cuban-Irish.

It’s your attitude in life. Like Rudyard Kipling in his poem, “if you can meet with Triumph and Disaster and treat those two imposters just the same.” That’s how I go through life. My mother used to send me those stanzas every week in summer camp. I hated summer camp. With a passion.

Aging is so much better than the alternative.

Even if you just took one patient a day that was uninsured, that would be four or five patients a week per doctor. And doctors are complaining about Obamacare and all these different things. Well, look, if we had done our responsibility in taking these patients, you wouldn’t need our government to turn around and make sure everybody got covered.

The best tip to a good life is your lifestyle. Stay away from processed foods. Live life in moderation. Enjoy life. The worst thing is you live to 100 and you hate every day.

I have red meat maybe twice a month even though I love it. I also love fish. I’ll have fish four or five times a week. And then chicken and the other white meat, occasionally, pork. I’m Cuban, you’ve got to have pork.

We’re right now getting out of our adolescent years as a city. I love what Miami is. As a Cuban-American, I’m so happy we’re not the majority. Why? Because nobody’s the majority. That’s what makes it great. That means everybody has an opportunity.

If you’ve been given an education, which I think is being given much, much is expected. You have to get out there and do things.

Personally, I really liked Obama. He was a great thinker and he did his homework.

We only take the uninsured. Give us the sickest of the sick so we can make them healthier.