The Looper on Beach Drive

With two international airports, an Interstate highway, public bus service, a trolley, ride sharing and bike sharing, getting to and around St. Petersburg has never been easier or greener.

St. Pete/Clearwater International Airport is also undergoing expansion to accommodate more passengers as its numbers reached an all-time high of 2 million in 2017. The terminal is adding 12,000 square feet and a new customs facility. The airport offers access to 62 destination non-stop via Allegiant and three other passenger airlines. The city-owned Albert Whitted Airport primarily handles private aircraft and charter flights.

Residents and visitors can hop on one of the Pinellas Suncoast Transit Authority’s new electric buses to travel the city, to the beaches and other Pinellas County locations. PSTA’s transit app shows bus schedules and real time availability of Coast Bike Share and Uber rides for connections.

For a 50-cent fare, the Looper takes passengers to downtown hotspots. The trolley bus runs seven days and will expand its reach, hours and capacity in October 2018. 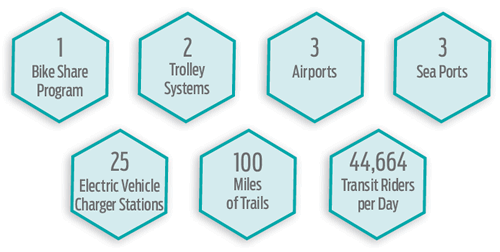