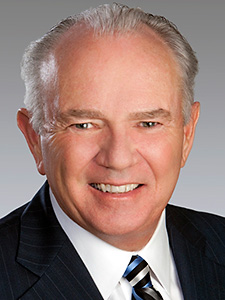 Myron A. Gray, president of U.S. operations of United Parcel Service (UPS), has been appointed deputy chair of the Federal Reserve Bank of Atlanta's board of directors.

Jackson joined AutoNation as chief executive officer in 1999 and assumed the role of chairman in 2002 and president in 2015. Before joining AutoNation, Jackson served as president and chief executive officer of Mercedes-Benz USA, where he helped create the vision and direction that led to the luxury vehicle brand's rejuvenation in the United States. Previously, he served as the managing partner of Euro Motorcars of Bethesda, Maryland, an operator of 11 new vehicle franchises.

Jackson served on the board of directors of the Federal Reserve Bank of Atlanta's Miami Branch and chaired the branch's board in 2013. He is a member of the board of governors and the immediate past chair of the Museum of Art Fort Lauderdale and currently serves on the board of trustees of Nova Southeastern University. In 2003, Jackson was named Automotive Hall of Fame Industry Leader of the Year, and in 2009, he was designated as one of the "Fifty Visionary Dealers" of all time by Automotive News. He was inducted into the Wayne Huizenga School of Business Entrepreneur Hall of Fame in 2010, and in 2012, he was named by Fortune magazine as one of the "Top 50 Global Business Leaders." Jackson has been named Dealer of the Year by Automotive News for the sixth time and 10 times overall. In April 2014, Jackson was inducted into the prestigious Horatio Alger Association of Distinguished Americans Inc.

Gray is president of U.S. operations for UPS with responsibility for all package delivery and logistics services for the world's largest economy. In July 2015, he assumed additional responsibility for transportation and UPS airlines. Gray is a member of the UPS management committee, the group of senior executives responsible for the day-to-day management of the company. In 2010, he led a strategic transformation of the company's U.S. small package business and has presided over programs to expand the company's logistics services, upgrade the technology in UPS operations, and improve the delivery fleet's fuel efficiency. Prior to his current role, Gray served as the president of the Americas Region, covering Canada, Mexico, Central America, South America, and the Caribbean. In this role, he led the expansion of UPS express delivery and logistics services into growing markets such as Mexico and Brazil.

Gray serves on the boards of the Atlanta Police Foundation, the Airline for America Organization, and the National Urban League. He is the national chairman of the Boys & Girls Clubs of America for 2017–18.

Gray holds a bachelor's degree in business administration from the University of Memphis and has completed advanced management programs at INSEAD in Fontainebleau, France, and the Yale School of Business.

Each of the nation's 12 Federal Reserve Banks has a nine-member board of directors. Three Class A directors are generally bankers and are elected by national and state-chartered banks that are members of the Federal Reserve System. Three Class B directors are also elected by these banks but represent commerce, industry, agriculture, labor, and consumers. Three Class C directors represent the same broad array of public interests but are appointed by the Board of Governors in Washington DC. The Reserve Bank's chair and deputy chair must be Class C directors.

The board of directors of the Federal Reserve Bank of Atlanta oversees the management of the bank's operations and recommends changes in the discount rate. Board members also contribute to the formulation of U.S. monetary policy through the economic information they provide to the bank's president.