An admirable public servant steps aside

Like many accomplished people, USF’s Susan MacManus describes her career in terms of good mentors, good luck and coincidences that put her at the right place at the right time. Beginning her Ph.D. studies at FSU, for example, just as one of her professors got a grant to study the effects of population shifts on local government, finance and elections — the basis for much of her later scholarship and emergence as an authoritative voice on Florida politics. Meeting a broadcast journalist in Tampa, for example, who coaxed her out of her classroom into her first onair appearance as an election analyst.

As is also true of many accomplished people, the deference to luck and coincidence is a form of modesty, a way to deflect the role that their intelligence and competence played in creating opportunity and knowing how to capitalize on it.

In MacManus’ case, smarts and hard work have made her, for the better part of two decades, Florida’s most-quoted political scientist, usually the first person called by national and local news operations for information and perspective on state politics. As Florida’s population has exploded and the state has emerged as a national bellwether, MacManus has chronicled changes in the demographics of Florida’s voters and their attitudes and explained them — clearly, authoritatively and calmly.

Now 70, MacManus is retiring from teaching this year after 45-plus years in the classroom, 30 years of those at USF in Tampa as a distinguished professor in the Department of Government and International Affairs. Tenure creates an incentive for older academics to hang on past their time, she says, and it’s time for her generation to make way. “The kids — the young political scientists — can’t get jobs,” she says. Fortunately for the state, she will continue her work analyzing Florida’s demographics and voting patterns, and she’ll continue to appear on-air and before civic groups.

MacManus has some serious Old Florida bona fides. Her grandfather, a citrus grower, was the first permanent resident of an area north of Tampa called Lutz, once a farming town and now a well-populated bedroom community. She lives in the house he lived in nearly 100 years ago and relishes life outside the city. Asked by a young colleague recently what sort of excitement she’d enjoyed during her summer break from teaching, “I told him I’d really enjoyed spending a lot of time at the local Kubota dealership. I was buying a tractor.” 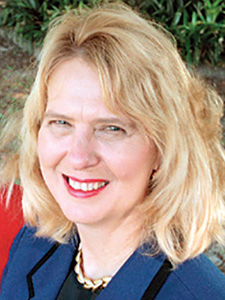 Aside from admiring how much she knows and how hard she works, I’m a MacManus fan for a couple of reasons. One is her approach to teaching. The social sciences have become polemical to the point that some professors punish students who don’t toe the prof’s ideological line. By contrast, MacManus cultivates good citizens of all political stripes. Students are more politically divided than you may think, she says, and she tries to encourage diversity of thought while insisting that those with differing ideas respect each other.

“I tell them I won’t tolerate you being disrespectful to a colleague,” she says. “I tell them ‘you need to take advantage of this time in your life when you can learn about somebody who’s not like you and why somebody thinks differently than you do.’ ”

She’s also not afraid to set standards. Her class projects are rigorous, oriented toward improving the real-world research, thinking, writing and presentation skills that the job market demands. “You don’t have to give them all A’s for students to like you,” she says.

I also like MacManus because she’s scrupulously nonpartisan when she’s on-air or speaking to a group — it’s all about what the data show, not what she thinks. She views her TV work and public speaking as an extension of her teaching and says it’s essential that her audiences see her as an information-collector and not as an opinion-monger.

Her lack of glitz and self-importance has served her well in establishing and maintaining her credibility. Bill Ratliff, the late broadcast journalist in Tampa who first invited her to appear onair, told her “you can talk to the everyday person,” she says. “I’m a country girl. That has helped me.”

Her initial reluctance to appear on TV and her subsequent success taught her a lesson that she’s tried to pass along to her classes. “I try to teach my students don’t say no to something you’re afraid of or don’t know immediately how to do.” Working with the media, she says, “made me a much better teacher and a better communicator.”

The major trend defining statewide politics in Florida these days is its competitiveness, she says. Democrats and Republicans are at rough parity in the number of registered voters, and neither party is growing. Younger people, suspicious of both parties, are registering as NPA — no-party affiliation — or with minor parties. NPAs and minor-party registrants now comprise about 27% of all registered voters, MacManus says, with that portion “growing all the time.” The challenge for the traditional major parties is “figuring out a way to appeal to that big new group.”

Meanwhile, Florida’s demographics in terms of race, ethnicity and religious makeup are closer to national averages than any other state’s — making it fertile ground for groups to test messaging they can use elsewhere. Outside money now pours into races that once would have drawn little attention, like the recent mayoral contest in St. Petersburg. “Every one of our races becomes nationalized,” MacManus says.

At a time when solid, unbiased information is increasingly hard to come by, MacManus is an antidote to fake news. I’m glad that while she’ll no longer be working in the classroom, she’ll still be teaching journalists and civic groups throughout Florida about the state’s voters, how they’re voting — and why.

Get Florida Trend's January magazine – print or digital. Select from these options: