Orthopedics – A trend toward less surgery

Youth baseball is played year-round in Florida, resulting in an increase in overuse injuries among players.

Dr. Lee Kaplan, director of the University of Miami Sports Medicine Institute, notes that Major League Baseball players generally finish their season in October and have months to rest before reporting in February for physicals. Not so for teen baseball players in south Florida.

The downside of Florida weather is that youth athletes go year-round through school seasons, travel team seasons, holiday tournaments and so on. It’s true in baseball, tennis and other sports. The result: “There’s defi nitely an increase in overuse injuries. Many kids are specializing earlier. In south Florida, they’re playing baseball four seasons a year,” Kaplan says. Parents and kids need to realize the importance of active rest and cross training and, if injured, to get with a physical therapist and get a program before restarting. Says Kaplan, “There needs to be a little rational thought.”

Meanwhile, Dr. George Pujalte at Mayo Clinic in Jacksonville conducted a study on Olympiccaliber athletes and found the data failed to support the notion that starting young led to elite performance. Many started late. The difference: “They were meant for that sport.” If your kid is destined for athletic greatness, playing a variety of sports and taking breaks won’t hurt. Pujalte has seen arthritis linked to early specialization and overuse of joints in teens. “It’s very worrisome that we see a 16 or 17 year old with arthritis. It’s just better to let your kids be kids and find their sport through the years.”

With all the attention on concussions in the NFL, should parents allow their boys to play football? Essentially, yes. There’s a theoretical basis, doctors say, for linking concussions to degenerative brain disease CTE, but science hasn’t proved it. The risk of concussions, and repetitive ones, grows as a youth moves to higher levels of the sport, but there are risks in being sedentary as well. 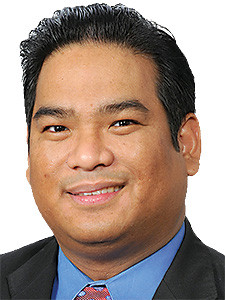 “It’s certainly still better for people to be active. I’m not discouraging a kid from activity based on a fear of concussion,” says Dr. George Pujalte, of Mayo Jacksonville.

Dr. David Westerdahl of the Cleveland Clinic in Weston says he lets his middle schooland high school-age children play sports — soccer — that have a risk of concussion because of the benefi ts of exercise and camaraderie and other positives that come with team sports. “As a parent, it’s important to provide for your child an opportunity to be active. Play those sports smartly and safely. Make sure the child has good equipment.” He does anticipate football adopting more rules to reduce harmful contact.

Heather Vincent: “What we try to recommend is just stay off of your chair as much as you can. Where possible, avoid sitting for long periods and only doing pockets of exercise. The people who do some movement every day, even if it’s a brisk walk, do a lot better healthwise than those who do an intense workout sporadically. Do something several times a week that’s going to get your heart rate up and get you a little sweaty and in addition to that we want some kind of strengthening exercise.”

Kevin Vincent: “The best exercise is the one you’ll do and do consistently. The body I have today is not the body I had 10 years ago. The body is going to tell you the things it likes and the things it doesn’t like. Say I’m a runner and I’m 57 years old and today my knee aches but today is my five-mile run. Could be I go to the gym and lift weights instead, or elliptical or cycle? Rest is not a four-letter word. It’s actually OK not to exercise every day. If you have arthritic issues around the joint, it doesn’t mean give up. It means work around it. It just means be smart. Maybe you have to do it as a walk-jog. Older people can still do those things. They just have to be willing to make adaptions around it. The most important thing is to not just give up and become sedentary.”

Heather: “If you think about strategies of successful athletes around the world in their 80s and 90s, aside from their genetic gifts, they tend to consume diets with very healthy fats, like olive oil, in low quantities, cold-water fishes like salmon and halibut, lots of fruits and vegetables, really managing themselves with natural foods. Always try to eat every day some orange vegetable, a green vegetable and some sort of dark berry and fiber.”

Kevin: “I believe that grandma needs a treadmill, not a rocking chair. You’re never too old to exercise. There’s a big difference between existence and living.”

Heather: “If people are looking for that magic pill — exercise. If exercise is not a priority now, it should be as you get older. Find an exercise partner or find a group class you might enjoy and have that social piece of the exercise. Those people who stick with it over decades are those not afraid to try something new and stick with it. We have a core group here on mindfulness. That is just appreciating the moment when you’re in it. If you have the opportunity to be outside, try not to rush through the exercise. Enjoy it while you’re out there.”