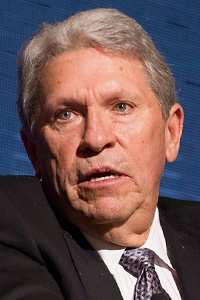 “It is with great sadness that we announce that E. Hunter Harrison, President and Chief Executive Officer of CSX, died today in Wellington, Fla., due to unexpectedly severe complications from a recent illness. The entire CSX family mourns this loss. On behalf of our Board of Directors, management team and employees, we extend our deepest sympathies to Hunter’s family. Hunter was a larger-than-life figure who brought his remarkable passion, experience and energy in railroading to CSX.”

“With the passing of Hunter Harrison, CSX has suffered a major loss. Notwithstanding that loss, the Board is confident that Jim Foote, as acting Chief Executive Officer, and the rest of the CSX team will capitalize on the changes that Hunter has made. The Board will continue to consider in a deliberative way how best to maximize CSX’s performance over the long term.”

CSX, based in Jacksonville, Florida, is a premier transportation company. It provides rail, intermodal and rail-to-truck transload services and solutions to customers across a broad array of markets, including energy, industrial, construction, agricultural, and consumer products. For over 190 years, CSX has played a critical role in the nation’s economic expansion and industrial development. Its network connects every major metropolitan area in the eastern United States, where nearly two-thirds of the nation’s population resides. It also links more than 240 short-line railroads and more than 70 ocean, river and lake ports with major population centers and farming towns alike.

More information about CSX Corporation and its subsidiaries is available at http://www.csx.com and on Facebook (http://www.facebook.com/OfficialCSX).