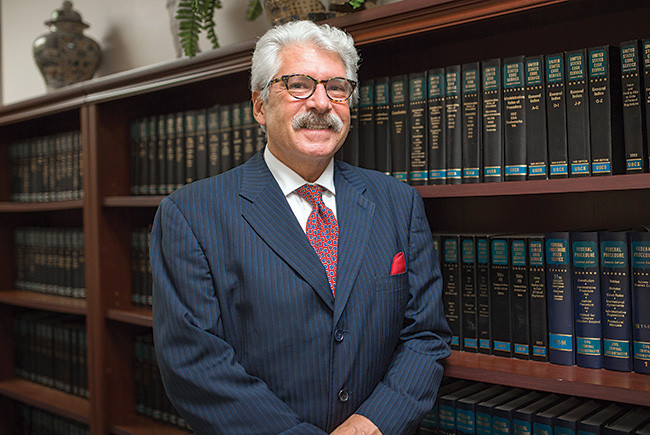 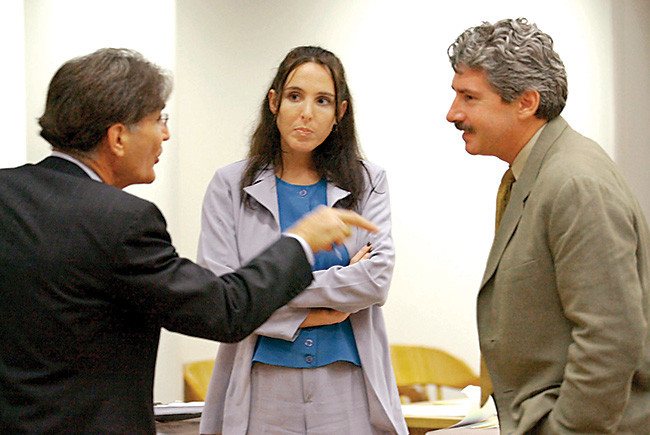 Joe Redner (left), owner of Mons Venus in Tampa, talks with attorney Luke Lirot, who represented Molly Jacobsen (center), a Mons Venus dancer who was on trial, in 2001.

When Luke Lirot was in the third grade, he had a homework assignment to make a collage out of paper scraps. His mom, a dress shop owner, kept stacks of fashion magazines around their home in Clearwater. Lirot, who attended a Catholic school, made his collage using pictures of lingerie-clad women cut from the pages of Harper’s Bazaar and Vogue.

“I showed up with a rather graphic collage, and I got in a lot of trouble for it,” he says. “It was my first run-in with censorship.”

Voted most popular by his high school classmates, Lirot went on to study criminology at Florida State University. He then attended law school in San Francisco, where he interned for the city public defender’s office. In 1986, as his mom was dying from cancer, he moved back to Clearwater.

Lirot sought work, unsuccessfully, as a public interest lawyer. To make ends meet he worked for a time in a factory silk-screening images of Budweiser mascot Spuds MacKenzie on Bic lighters. A friend eventually helped him land a legal job with Tom Little, a bankruptcy and real estate attorney in Clearwater.

“At that point, I wasn’t going to be picky anymore,” Lirot says. “I learned how to do bankruptcy hearings and real estate closing statements, which was like math homework — quite a departure from interning in the public defender’s office.”

Shortly afterward, Little got a phone call from Tampa strip-club entrepreneur Joe Redner. Little had sold some commercial property to Redner, who, in turn, had opened a strip club featuring full nudity in Pinellas County. The club’s dancers were being arrested on lewdness charges. Redner, who also was busy fending off legal challenges in Tampa, needed a local attorney to handle their arraignments.

“Didn’t you do arraignments at the public defender’s office in San Francisco?” Little asked Lirot. “Every day,” Lirot replied.

With Little’s blessing, Lirot soon joined Redner as his in- house defense attorney.

In 1990, Lirot started his own law firm specializing in First Amendment and criminal defense cases. During the 1990s and early 2000s, as Redner expanded his adult-entertainment business, city and county governments passed ordinances to ban strip clubs or nude lap dancing. Lirot and Redner countersued, winning more than $1 million in damages over the years. Meanwhile, the two men hosted a weekly call-in TV talk show about civil liberties issues.

“I’ve never been a big customer of adult businesses. I was always proud to be one of the few guys who would walk out of the clubs with more money than I had going in,” Lirot says, referring to the money he was making there as a lawyer. “I just never liked people being able to dictate what others could see, hear or read.”

In addition to his work for Redner, Lirot has defended the free speech rights of political candidates, activists, bookstores, cops, priests and cartoonists.

“I think the jury was just so offended,” Lirot says. “From our perspective, it wasn’t pretty. But the intended audience apparently was not offended by it, and it wasn’t rare in the ’zine world to draw this ridiculous stuff.”

In 1999, Lirot successfully sued the city of Tampa over efforts to shut down an adult entertainment website called “Voyeur Dorm” — a reality show of sorts in a home where cameras recorded the private lives of five young women. The 11th Circuit Court of Appeals ruled in “Voyeur Dorm’s” favor, establishing that adult internet businesses were not subject to municipal zoning regulations.

These days, local officials take a more “live and let live” attitude toward the adult entertainment industry, Lirot says. Tampa’s “six-foot rule,” which sought to ban body contact between exotic dancers and customers in the early 2000s, no longer is enforced, although it technically remains on the books.

“I don’t think there’s been an arrest in a strip club for an ordinance violation in the Bay area since 2006,” he says. Lirot adds that a major issue now facing the industry involves wage and hour disputes between dancers and club owners [“Florida’s Vice Economy,” page 52].

Last year, rather than fight the government, Lirot represented Pasco County against a lawsuit over rules stating where sex offenders may not live. He says he worked with the plaintiff’s attorneys to tweak the ordinance to make it clearer.