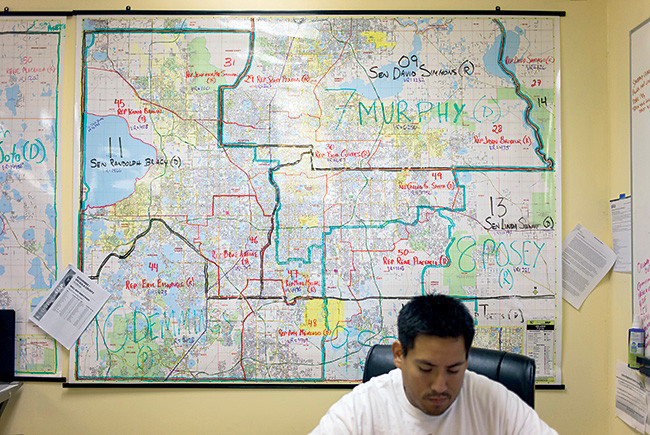 Esteban Garces, Florida director of Mi Familia Vota, says that concerns over housing and basic needs will give way to other concerns, such as registering new residents to vote. Behind Garces is an electoral map of central Florida. 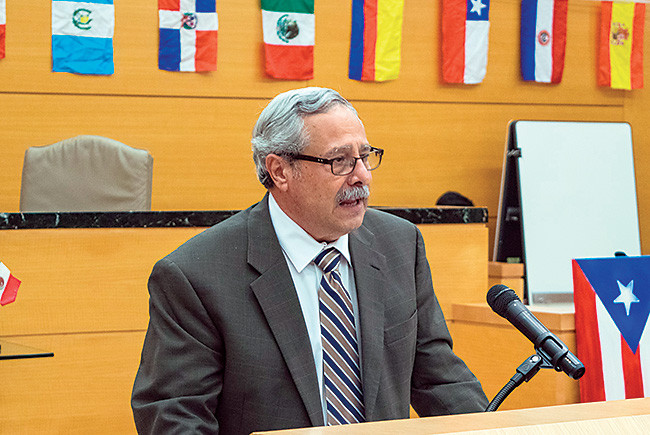 Professor Edwin Melendez: The longer evacuees are forced to stay on the mainland, the harder it will become for them to leave.
< > 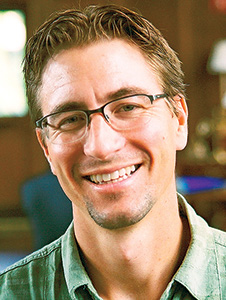 There are nearly 1.1 million Puerto Ricans living in Florida. Hurricane Maria's devastation will accelerate the migration to between 60,000 and 90,000 a year.

The first Puerto Ricans to migrate to Florida settled in Tampa Bay, particularly Ybor City, joining immigrants from Cuba, Spain and Italy in an enclave that was once the heart of the U.S. cigar industry. The next generation of migrants from the island shifted toward Miami and job opportunities in seasonal agriculture, textiles and tourism.

In the 1970s, Disney built its Magic Kingdom, setting off the tourism boom in Orlando. The prospect of jobs drew a new wave of Puerto Rican migrants, who began to settle in areas east and south of Orlando. Central Florida businesses stoked demand — Landstar Homes, the developer of Buenaventura Lakes in Osceola County, marketed aggressively on the island. Disney still recruits university students from Puerto Rico.

The Puerto Rico-to-central- Florida migration that began when Disney World opened “hasn’t stopped since,” says Jorge Duany, a professor at Florida International University in Miami and the author of Puerto Rico: What Everyone Needs to Know.

A decade-long recession that took root on the island in the early 2000s turned the migratory stream into a river. Before 2005 or so, somewhere between 15,000 to 20,000 people were moving each year from Puerto Rico to the mainland United States, says Edwin Melendez, a professor and director of the Center for Puerto Rican Studies at Hunter College, part of the City University of New York system. That figure doubled to about 40,000 a year during the first half of the recession.

The influx has had a profound impact on Florida generally and central Florida specifically. There have been little changes: The “Best of Orlando” awards compiled by the city’s alternative weekly newspaper now include a “Best Puerto Rican Comfort Food” category. And bigger changes: Largely because of the growth of the Puerto Rican community, Democrats claimed control of the Osceola County Commission in 2014 and quickly began passing progressive ordinances fighting wage theft and prohibiting LGBTQ discrimination, among other changes.

Statewide, Puerto Ricans, who now number more than one in five Hispanic voters in Florida, have become a Democrat-leaning counterweight to Miami’s Republicanleaning Cuban population.

Estimates about how many Puerto Ricans will resettle in Florida after Maria vary wildly, from 100,000 to 1 million. “I understand there are about 1,000 Puerto Ricans arriving daily,” says Esteban Garces, Florida director for Mi Familia Vota, an organization that registers Latino Americans to vote. “And not 1,000 daily in Florida – 1,000 daily in central Florida.”

Melendez, at Hunter College, predicts that the rate of stateside migration from Puerto Rico will double or triple for the next few years. “We’re talking anywhere between 60,000 and 90,000 a year going to Florida specifically,” he says.

Unknown is how many Puerto Ricans will choose to stay permanently. Melendez says the longer it takes to rebuild Puerto Rico, the harder it will become for evacuees to leave the mainland. “To the extent that people get jobs and once you get past two, three, five months, then it’s going to become increasingly difficult for people to return,” he says.

The Puerto Ricans who left the island before Maria tended to be, on average, younger, workingage people departing to search for jobs or careers. By contrast, those forced out by Maria are more likely to resemble a broader cross-section of society — including more young children, elderly people and others from vulnerable populations.

In a separate study, Daniel Smith, a professor of political science at the University of Florida, studied election results of the roughly three dozen precincts in Florida in which more than half of those voting were Hispanic and which had at least 50 Puerto Rican- born voters. Trump never got more than about 30% of the vote in any of them.

Democratic strategists, wary of being seen as exploiting a humanitarian crisis, say there are far more urgent concerns right now than elections. “We’re not focused on registering voters; we’re focused on getting people housing,” says Christine Biron, chief of staff to U.S. Rep. Darren Soto (D-Orlando), the first member of Congress of Puerto Rican descent elected from Florida. “I would say our two biggest issues right now are getting people food and getting people shelter.”

But a big registration push will happen at some point — and almost certainly before the 2018 elections.

Puerto Ricans, of course, are already American citizens and don’t have to go through a naturalization process like Cuban or Haitian immigrants. Smith’s hypothesis is that having to obtain citizenship “raises your civic engagement,” he says.

Whatever the reason, it means that Democrats can’t simply count on a flood of Puerto Ricans tipping future Florida elections.

“Democrats may be salivating,” Smith says. “But there’s a lot of hard work to be done to get newly migrated populations registered and turning out to vote.”

Esteban Garces, Florida director of Mi Familia Vota, says that concerns over housing and basic needs will give way to other concerns, such as registering new residents to vote. Behind Garces is an electoral map of central Florida.