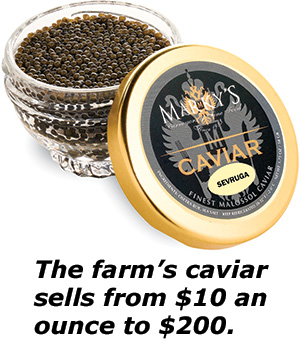 The Jackson County community of Bascom (population 106) is perhaps best known as the birthplace of Academy Awardwinning actor Faye Dunaway. More recently, Bascom is making a bid to become the Caviar Capital of America.

Just south of the Alabama border and 100 miles west of Tallahassee, Bascom is home to Sturgeon Aquafarms, whose fish stock produces top-grade caviar. Headquartered in Miami, Sturgeon Aquafarms is run by Christopher Hlubb, president and COO.

While there are a few other sites in the U.S. that produce caviar, including Mote Marine Laboratory in Sarasota, Sturgeon Aquafarms is the only grower of all five of the highly desired native Caspian Sea species, including beluga.

Why would a south Florida company choose to locate an aquafarm in Bascom?

“It was the water,” says Hlubb. “We needed a natural supply of fresh water at year-round temperatures lower than those available in south Florida. Sturgeon cannot sustain water temperatures above 81 degrees for long periods of time.”

Located on 120 acres next to a cotton farm, Sturgeon Aquafarms houses dozens of large freshwater holding tanks where the fish are raised.

An important aspect of the operation, says Hlubb, is determining the sex of the sturgeon fingerlings. The males are separated early from the egg-laying females and later processed for their meat.

Depending on the species of sturgeon, the farm’s caviar sells from $10 an ounce to $200. Most of the production is sold to restaurants, hotels and high-end retail shops.

“The facility and our caviar production have been growing slowly over the years,” says Hlubb. “It’s like a winery; it takes a lot of time to develop.”