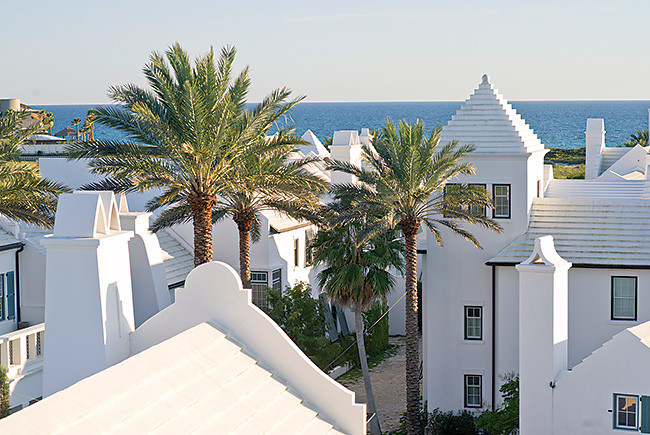 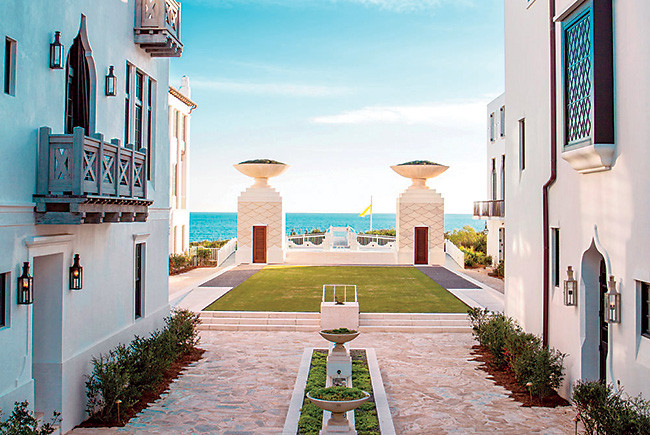 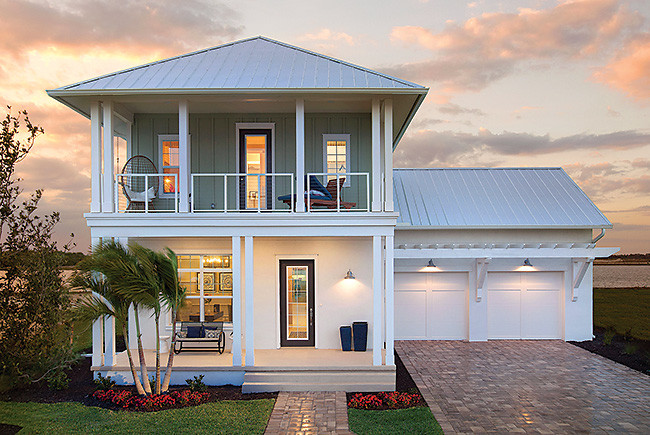 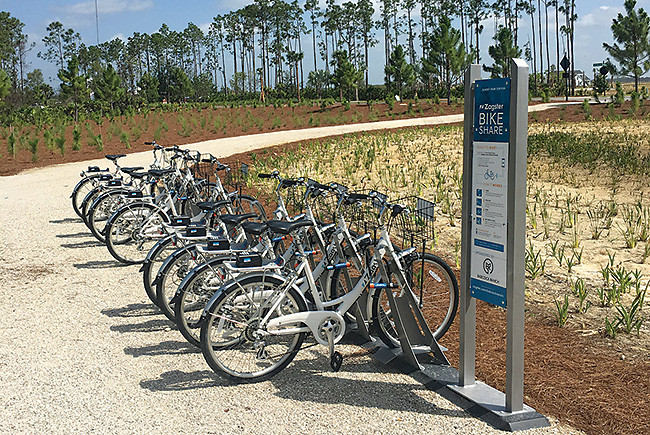 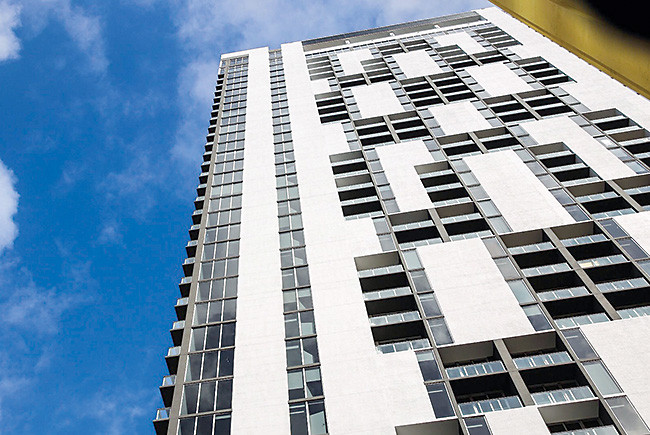 The Centro residential tower in Miami is certified green. Miami has an expedited permit review process for green projects. 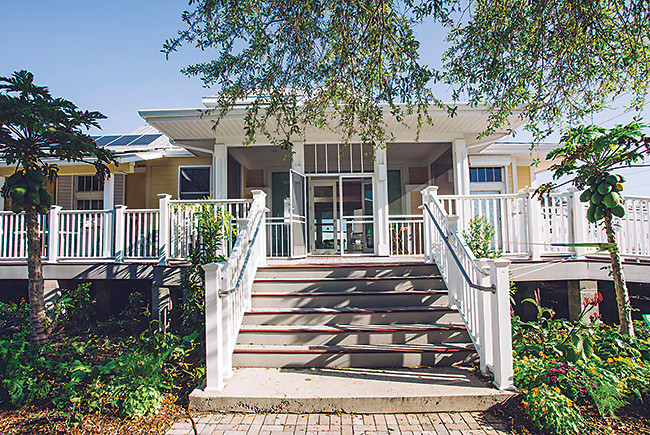 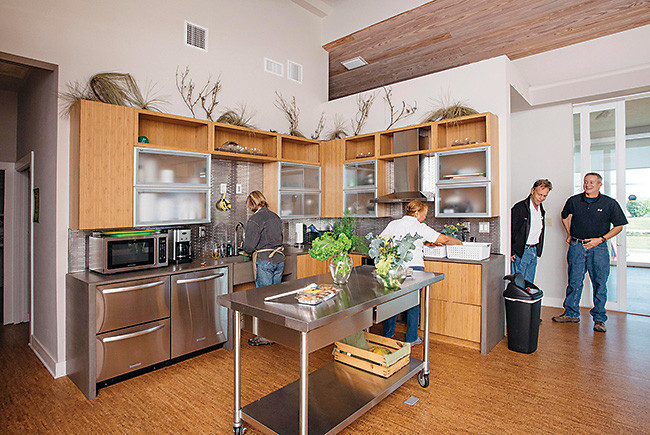 Interior of the green demonstration house in Sarasota. 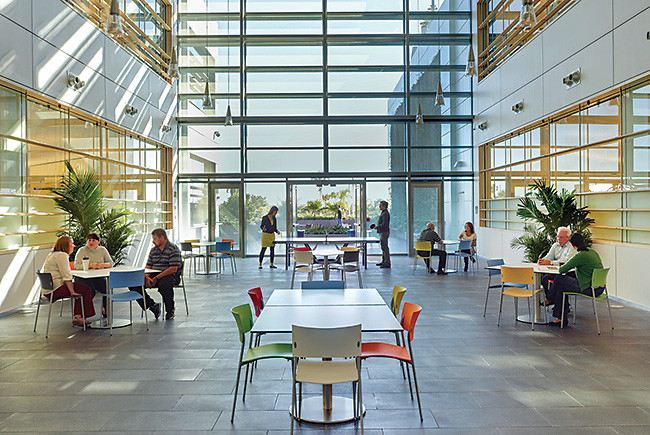 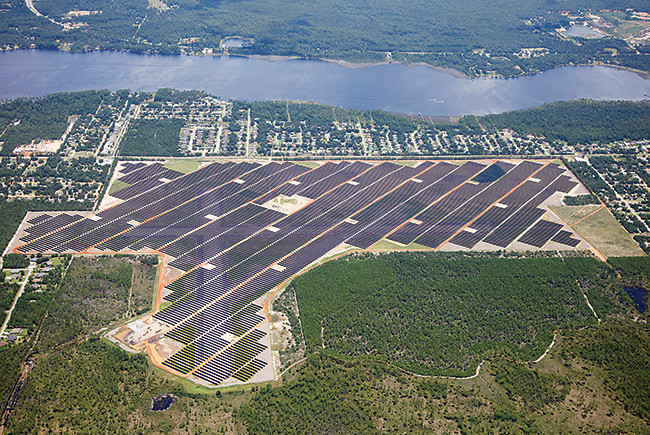 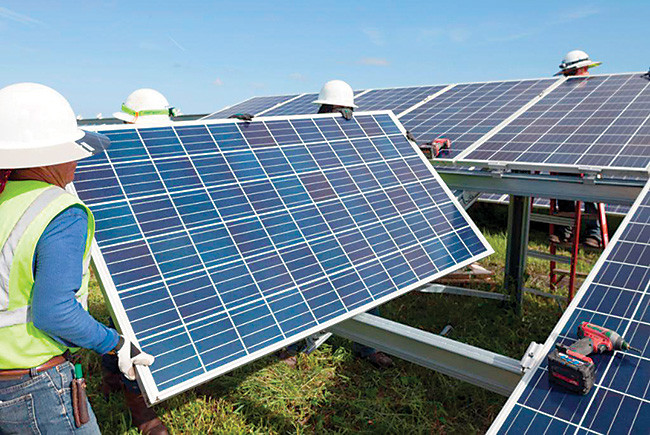 Solar panels being installed at an FPL solar farm. 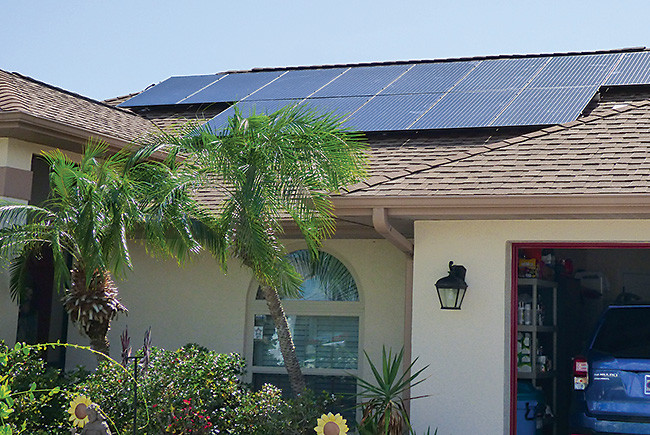 The non-profit U.S. Green Building Council developed the Leadership in Energy and Environmental Design (LEED) rating system to evaluate buildings based on their environmental impacts and to ultimately encourage sustainability. Projects pursuing LEED certification earn points for sustainable features, such as solar panels, energy-efficient lights and native landscaping. A building needs at least 40 points to be LEED-certified.

Since its founding in 2000, the Florida Green Building Coalition (FGBC), a non-profit based in Orlando, has certified more than 16,000 commercial and residential projects statewide.

Alys Beach, a master-planned beachfront community in the Panhandle, features buildings with white roofs and walls to reflect heat from the sun. Cobblestone streets allow rainwater to naturally filter into the soil below, reducing problems associated with runoff. Native plants are used to minimize the need for water, fertilizer and pesticides.

Although construction on the first houses in Alys began in 2004, the development was slow to take off because of a spate of hurricanes, the recession and the Deepwater Horizon oil spill. Today, the community includes 125 residences and 18,000 square feet of commercial space.

Developer EBSCO, based in Birmingham, Ala., requires all homes to be certified as green by the FGBC, making Alys the first community in Florida to do so. Among the homes’ green features are spray foam insulation to reduce air leakage and energy- and water-efficient appliances.

With its own solar farm and extensive nature trail network, Babcock Ranch in southwest Florida could become the most sustainable community in the U.S.

Additional green features include 50 miles of nature trails, driverless electric public transportation and a water management system designed to protect marshes and prevent floods. More than half of the land is designated for parks, trails and other green spaces.

Babcock Ranch, which encompasses 18,000 acres in Charlotte and Lee counties, broke ground last year on the first of nearly 20,000 planned housing units. Plans also call for 6 million square feet of commercial, educational and public space over the next two decades.

As part of the first phase of construction, more than 1,000 homes are being built. Home prices will range from the low $200,000s to nearly $1 million, says Syd Kitson.

In the mid-2000s, the Florida Green Building Coalition (FGBC) created a certification program to encourage local governments to be more sustainable. Since then, FGBC has certified about 70 green cities and counties.

Under the organization’s certification program, local governments earn points for eco-friendly policies and practices, which can include everything from using less water in ball field maintenance to making streets safer for pedestrians and bicyclists.

Miami-Dade County has established itself as a leader in green governance, says C.J. Davila, executive director of FGBC. Besides incorporating green development principles into its own buildings, Miami-Dade has an expedited permit review process for green private-sector projects, he points out.

“In Miami, you have huge high-rises right next to a seawall. If ever there’s a place where you can see the effects of sea-level rise, that’s it,” Davila says.

Going green helps local governments reduce water and energy use, save money and please residents concerned about the environment, he says. “It’s about being good to the planet and also saving taxpayer dollars.”

C.J. Davila became executive director of the Florida Green Building Coalition this year, succeeding Suzanne Cook, who led the organization for more than a decade. Davila previously was director of the Orlando Regional Realtor Foundation, a non-profit that promotes affordable housing.