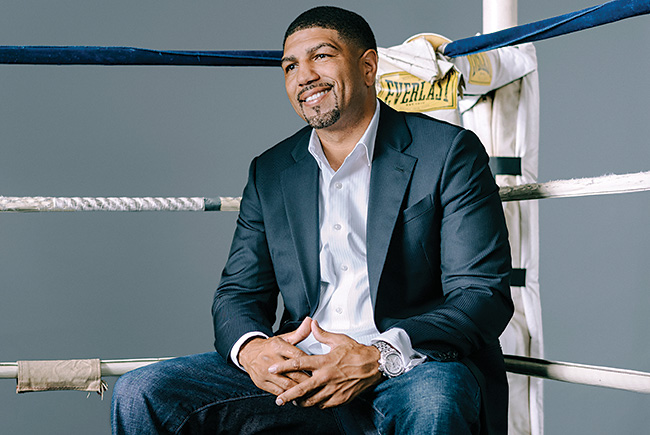 Being a businessman, hands down, is harder than being a boxer.

My best experiences in life have been doing stuff with my kids and my family. Don’t get me wrong. I partied a lot, partied with the best people. That’s cool, but the best times were with my family, going to Disney World with my kids, going skiing with my kids. That’s the kind of stuff you remember.

Even as a kid, I wasn’t scared of getting hit. I was so quick that I felt you couldn’t hit me. For real. My biggest thing was learning how to box and gain more power so I could hurt people and knock them out. Once I did that, my boxing took off.

I could never be one of those parents who don’t see their kids. How do you do that?

Talk is cheap. Like in basketball and football. Yeah they can do all that talking, but they have other people to help them. In boxing, it’s just me and you, and I love that. Man against man. You think you’re better than me? Let’s do it.

My grandparents moved me from D.C. to St. Pete when I was 15 going on 16. At first, I didn’t want to be here — you have to remember that I was moving from a big city — but now I feel blessed to be here. Within a year, St. Pete felt like home.

When I want to relax, I play golf. I play golf almost every other day. When I’m frustrated, I just want to get out on the golf course and get with some friends and laugh and joke. Take my mind off business.

When I was fighting, my big money time was right before the crash. I lost money, but I also saved money, so I’m good. I would love to be a lot better, but it is what it is. I’m happy, healthy and I got my kids.

The weird thing is I never thought about what I was going to do. When I started boxing, I was in high school and never thought about becoming a professional boxer. Even when I was at the top of amateur boxing. I was like I’m going to finish high school and find work somewhere. But when I was 18, a promoter came to me and said, ‘Do you want to turn pro?’ I’m like, ‘You’re going to pay me to fight? Hell yeah!’

My business now, I help adults with disabilities. I help them live on their own. The state wants to put them in group homes, but some of them don’t function well in group homes, so we try to get them to live in a house with another client who has the same kind of disability. I like the business because you’re helping these people, but it’s hard. The problem is the state underpays the providers who provide this service. It’s crazy because there are a lot of people with disabilities. I have clients right now who need 24-hour care, but the state will only pay for eight hours. Who’s going to watch them for the other 16 hours? At one time, Florida was paying the providers double what they’re paying them now — and that was 10 years ago.

Sometimes, you get drunk people who want to fight you. I don’t play like that. I get paid to fight. I get paid to throw punches. I don’t want to have to hit nobody with my bare knuckles. You know what I’m saying? That’s going to be a problem.

My grandmother gave me the Winky nickname. I was probably a year old, I guess, and I used to wink at people.

I also have a real estate business. We started out by buying wholesale houses and selling wholesale to other wholesale buyers. Now, we’re starting to buy houses, renovate them and sell them ourselves. It’s hard because there’s so much competition. There are so many people doing things the wrong way that it’s hard for somebody doing it the right way. But that’s cool. Anything worth having isn’t going to be easy.

My health is good, but certain fighters, their speech slows down, their mobility slows down, but that’s part of the game. We know that going in.

The world is changing. There are a lot of people who don’t want that change to happen, people who want to keep a certain demographic of people down.

When you’re boxing, you’re amped up, hyped up. You’ve got the adrenaline flowing, so you really don’t feel it when you get hit — until later. That next day, that’s when you feel the pain.

I don’t cook. I don’t know how to cook. I never learned. I always had a woman, so she cooked for me. I just learned how to wash clothes.