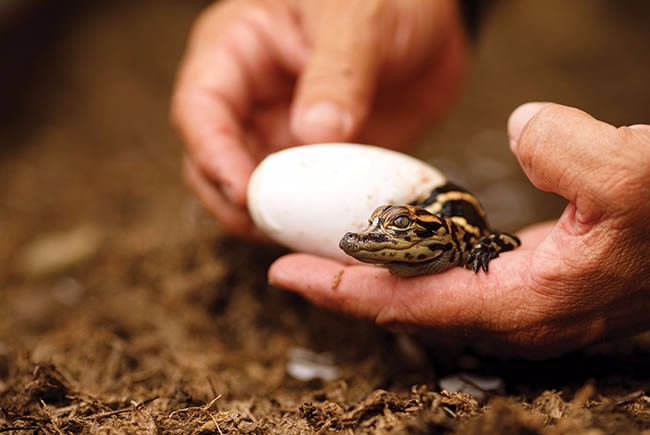 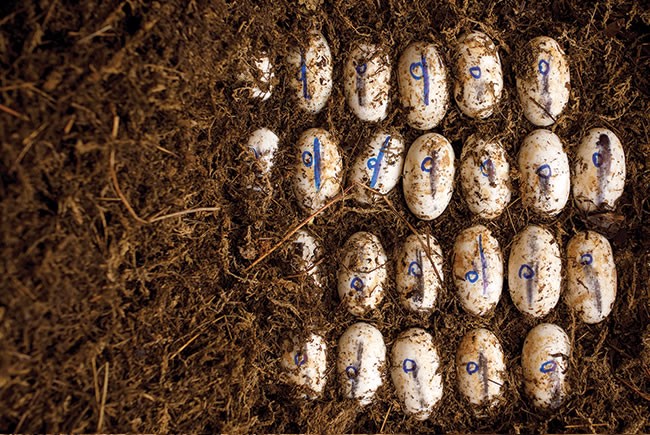 Farm-raised gators get their start in an incubator room. 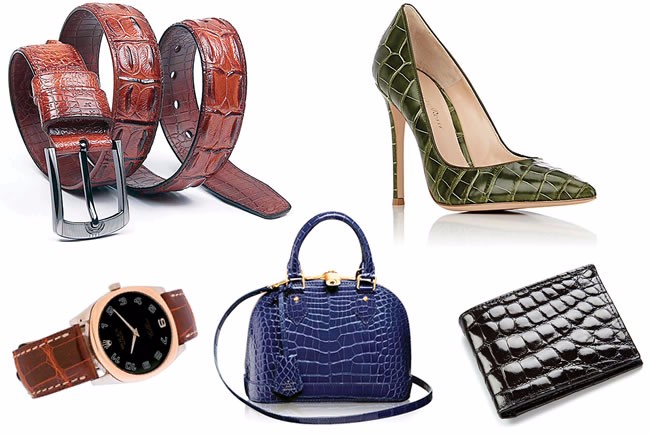 The money is in the hides, which are sold on the fashion market, where they're used to make handbags, shoes and other items. 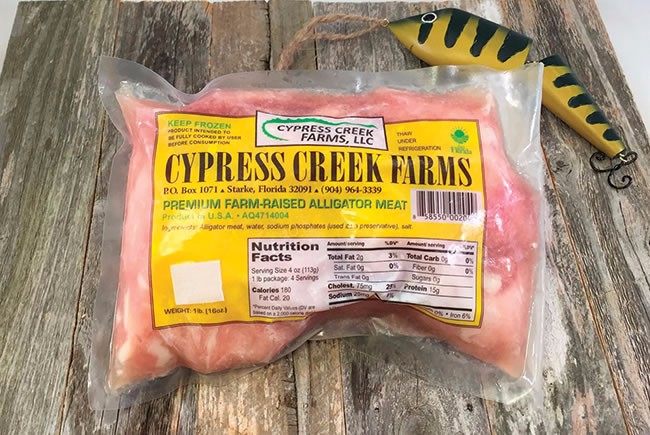 Meat is a by-product - in 2015, the wholesale value of Florida's farmed alligator meat was a fourth the value of the hides. 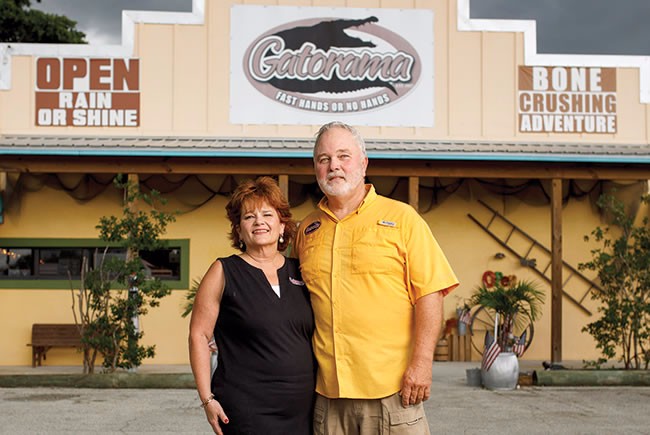 In Palmdale, Allen Register and his wife, Patty, operate Gatorama, an alligator farm that doubles as a tourist attraction. 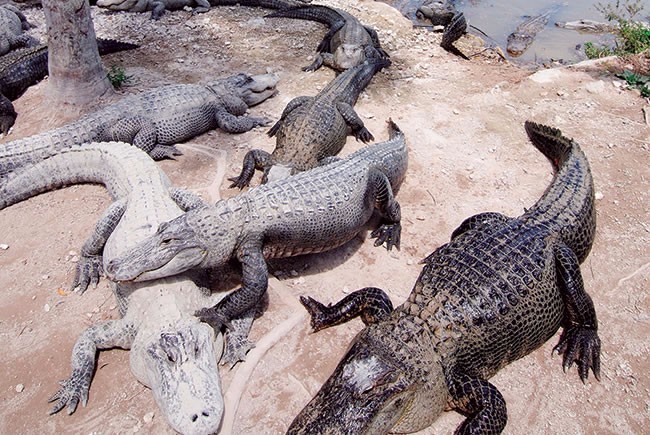 Alligators were on the endangered species list in Florida until 1987.  They are now plentiful in part because the state promoted the creation of private alligator farms. 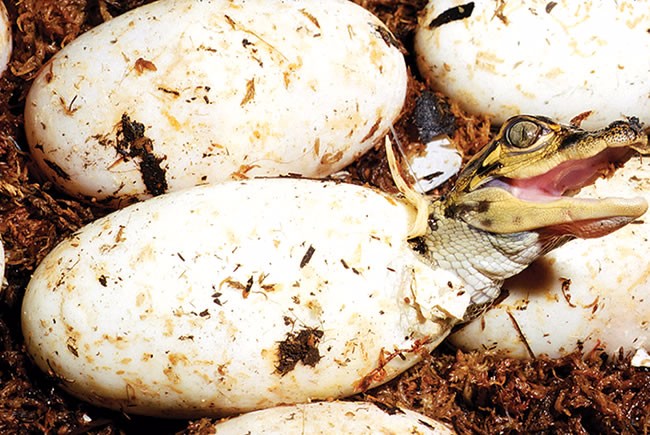 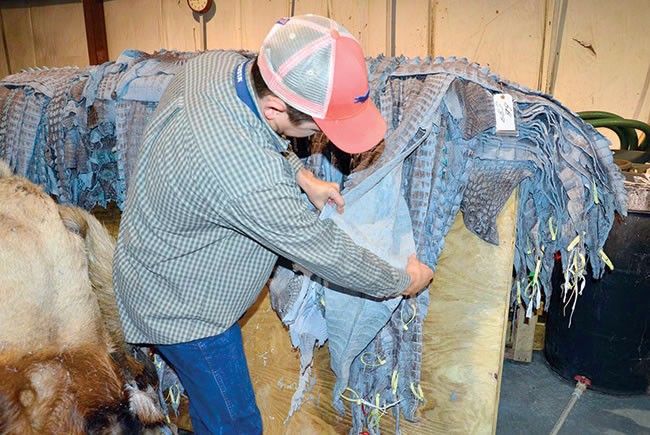 In the alligator business, there's no doubt as to which comes first, the alligator or the egg. It's the egg. The problem is, there aren't enough to go around.

As Tropical Storm Emily drenched DeSoto County in July, a man, whitebearded, tall and erect, arrived in the county seat of Arcadia and made his way into the courthouse, a centuryold Classical Revival building on the town’s courthouse square.

Though he could have been mistaken for an expert witness, David W. Nellis, was not there voluntarily. Nellis, 73, is the retired chief of the Bureau of Wildlife in the U.S. Virgin Islands, the rough equivalent of Florida’s Fish and Wildlife Conservation Commission. A biologist with a doctorate from the University of Georgia, he lives in southwest Florida and is the author of three books on Florida and Caribbean seashore plants, poisonous plants and coastal birds.

More recently, Nellis had taken an interest in Florida alligators. Indeed, says Allen Register, owner of the Gatorama alligator farm and attraction about an hour to the east, Nellis became so hungry for knowledge for a book he was working on that eventually Register had to cut him off. “He pestered the hell out of me,” Register recalls.

Nellis was at the DeSoto courthouse to be arraigned. Two months earlier, Florida wildlife enforcement agents had arrested him and three other men on charges they were part of an “organized criminal conspiracy” that poached alligator eggs. It’s odd stuff, even for a rural Florida county courthouse, but serious. The four have been charged with racketeering and conspiracy to commit racketeering — charges usually deployed against drug cartels and mobsters — and each carries up to a 30- year prison sentence.

On the endangered species list in Florida until 1987, alligators are now plentiful in part because the state promoted the creation of private alligator farms. Florida has been issuing gator farm licenses since 1977. Today, there are about 90 licensed farms, but only about 17 are actively producing hides. Cypress Creek Farms in Starke, the largest, had 28,000 alligators at last reporting; two others have more than 10,000.

For gator farmers, meat, which fetches about $8.50 a pound wholesale, is a by-product. The money is in the hides, sold to fashion giants like LVMH Moet Hennessy, the French parent of Louis Vuitton. Hide prices vary — $15 a linear foot in 2010, $75 a foot in 2012, down to $59 in 2015 and reportedly down considerably this year. On average, each gator fetches about $395 to the farmer.

“When hide prices are up, everyone wants to be an alligator farmer because it’s get-rich-quick,” Register says.

The industry dynamics that landed Nellis in court originate largely in the bayous of another state. Florida may be celebrated in song as “Gator Country,” but Louisiana — where gator farms are known as ranches — rules the industry. The value of Louisiana’s alligator harvest in 2013 was $35.6 million, four times the $8.9 million value of Florida-farmed hides and meat. Louisiana, says Register, is “kind of the dog, and we’re the tail.”

Louisiana’s industry, though, has a problem — a shortage of eggs to support its scale. It’s not easy to get alligators to nest in captivity, and to restock their enterprises, farms depend on collecting eggs in the wild. Driven by demand from Louisiana, the price of eggs has risen high enough that the regulated systems for collecting them in the wild in Florida are under a lot of pressure.

Florida farmers, who both use eggs and sell them to Louisiana, get eggs two ways.

Years ago, the state gave 30 gator farmers permits to collect eggs on Florida’s public waters each year. The number of permits hasn’t increased. Each year the state determines the number of eggs that those 30 permit-holders can collectively gather from Lake Tohopekaliga, the St. Johns and Kissimmee rivers and a couple dozen more sites, including the most fertile egg ground, Lake Okeechobee. In addition to what it costs the farmers collectively for a helicopter, airboats and workers to gather eggs, they pay the state a fee for each egg.

On average, the 30 permit holders each get about 1,200 eggs per year, generally paying $12.50 to $13 per egg, says Register, who was chosen decades ago by the permit holders as the egg collection coordinator.

The second way to acquire eggs is more complicated. Those with licenses to collect eggs can gather eggs from gator nests on private lands — ranches in southwest Florida, for example — if they get permission from a landowner. They have to usually pay the landowner for each egg they collect, and the state FWC must approve the collection. This process has produced an average of 90,000 eggs a year for the last five years.

FWC approval carries a set of rules as thick as any swamp. The state specifies how many nests can be raided and eggs taken from private lands. Gatherers have to file a report on each nest they find, including its GPS location. The permit also may specify that collectors can open no more than half the nests found, making opening a nest a guessing game as to which will produce eggs and which is a dud. A certified biologist — Nellis is one — must personally witness and document the whole thing.

The process is costly: In addition to the equipment and labor cost of collecting the eggs, the permitted collector pays a biologist, who may charge $350 per day. The biggest cost is the payment to the landowner: With demand for eggs from Louisiana rising, landowners can demand $50 or more an egg, double the price of just a few years ago. At that price, an average gator nest is worth $1,750 to a landowner.

To avoid those costs, some turn to poaching. In recent years, the state noticed that some farms were reporting hatch rates that were “statistically unachievable” — rates higher than 80%, more than double what biological studies would indicate. The FWC became convinced people were poaching wild eggs and laundering them through farms.