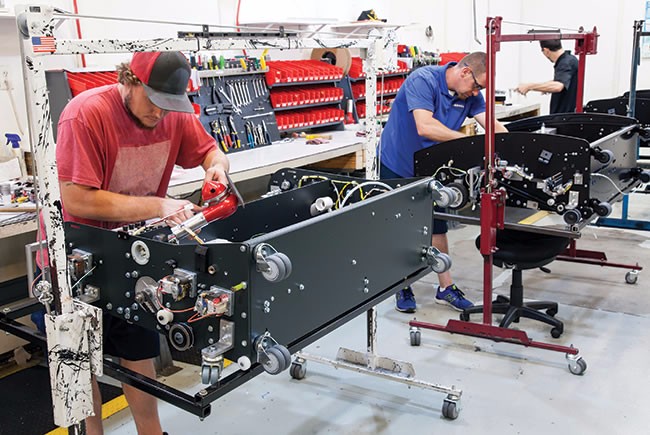 Kegel, which employs about 100, sells $20 million a year in bowling lane maintenance equipment, parts and chemicals. Almost half of its sales are overseas. 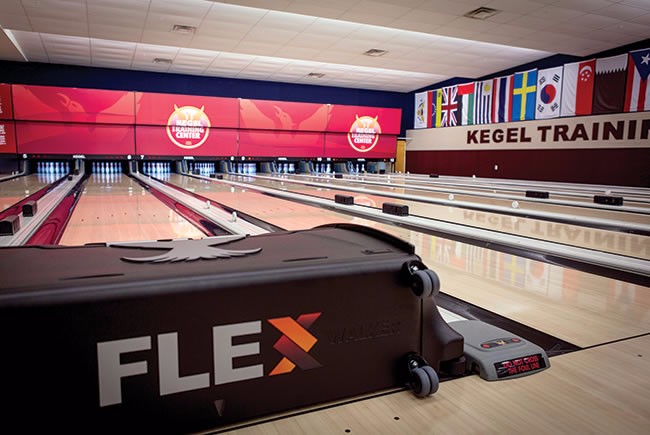 Kegel’s Flex machine cleans and conditions lanes at the company’s 12-lane bowling training center in Lake Wales. An all-day session at the center costs $600. The company holds more than 30 patents. 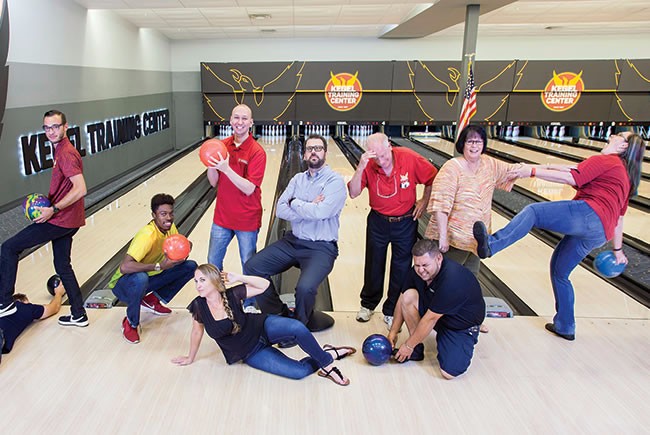 Best Companies to Work For in Florida - 2017

Even as bowling alleys struggle to attract new customers, an equipment manufacturer in Lake Wales outperforms the industry.

Quote: “We try to make bowling better because we all love it so much. If you go around the building, most people will tell you they spend a lot of time bowling,” Chartrand says.

John Davis grew up in a bowling family as the sport’s popularity peaked in the 1950s and 1960s. His dad, who worked at a hat factory, ran a local bowling league in his spare time in St. Joe, Mo. His mom, a volunteer youth bowling coach, regularly took Davis and his four younger brothers to the lanes. An injury during his teen years left Davis unable to extend his bowling arm completely, and of the five boys, he was the only one to never bowl a perfect 300 game.

Davis enlisted in the Air Force in 1967 and spent time at MacDill AFB in Tampa. After serving in Vietnam, he eventually returned to Florida, where he found a job as a mechanic for a bowling alley in Sebring. One of his daily tasks was to clean the lanes — which at the time meant getting on his hands and knees to remove oil and dirt, sometimes using harsh chemicals. “It was some nasty stuff,” he once told the Lakeland Ledger.

In 1981, Davis created a hand-operated lane-cleaning tool called the Key. He quit his job and spent the next year traveling throughout the Midwest in a Chevrolet Malibu station wagon demonstrating the $350 apparatus to bowling alley proprietors.

Typically, the owners would claim their lanes were clean, but then would recoil after Davis ran his machine down a lane and the machine’s contact surface came back black with grime. “People’s jaws would drop,” says his middle brother, Mark, 59. “He usually sold every tool on the spot.”

In 1982, Davis got a big break when Brunswick, a major manufacturer of bowling equipment, ordered 700 units to sell in its catalog. Davis got a patent and named his company Kegel, an adaptation of kegeln, the German word for bowling. He, his wife, Linda, and family friend David Jennings invested their savings to start the company. Mark, his brother, came on board as well.

A year later, after learning that the Sebring bowling alley where he had worked was in financial trouble, Davis bought it. Over time, the alley provided steady income as Davis continued to think up new lane products.

“We’re kind of lazy mechanics,” Mark says. “We want to be able to do the job better, faster and easier.”

John Davis, who worked in a bowling alley at a young age, founded the company. He died in 2013. Brother Mark is executive vice president of mechanical product development and support, and Chris Chartrand, hired at age 23, is now CEO. Jonathan Mitchell bought a 49.5% stake in Kegel in 2003 and now owns 100% of the company. “The company does a lot of research and development, and that’s important to me,” Mitchell says. “If you don’t put a lot of money into R&D, you’ll soon find yourself very behind.”

In the late-1980s, Kegel came out with a machine called Sanction, which used a laboratory-grade pump to precisely apply oil onto lanes in ways that had never been done before. Oil patterns change the difficulty of a bowling lane by affecting how the ball moves — oil can be applied to make the lane pro-level difficult or nearly gutter-ball-proof.

Kegel later introduced the Walker, a robotic oiling machine that could move from lane to lane on its own at programmed settings. The company initially manufactured the machines for DBA Products, which sold them under its own name until DBA was acquired by Brunswick.

In the late 1990s, Davis decided to build Kegel as its own brand rather than continue as a contract manufacturer. He hired a salesman named Chris Chartrand, a West Palm Beach native who had competed on Florida State University’s bowling team with one of Davis’ sons. Chartrand, then 23, began setting up a global distributor network for Kegel. “I spent a lot of time in Europe and Asia,” he says.

In 2003, Davis looked for outside funding to grow the company and sold a 49.5% stake to private investor Jonathan Mitchell, who lives in Sarasota. A novice bowler, Mitchell says, “If I break 100, it’s champagne all around.” He explains he got involved because he liked and admired Davis and thought Kegel could find “opportunities outside the bowling industry, which I thought would be interesting to capitalize on.”