TALLAHASSEE, FL – The Florida Retail Federation (FRF), the state’s premier trade association celebrating its 80th year of supporting Florida’s retail industry, has good news for retailers this Independence Day weekend, with per person spending on food for cookouts and picnics expected to increase from last year with total spending on food nationally to exceed $7.1 billion. The numbers cover only food items, not other holiday-related spending. 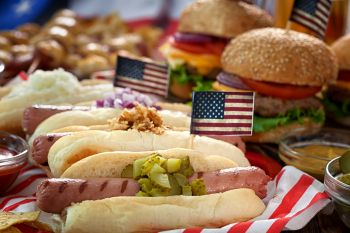 “Independence Day weekend is the most popular time for family and friends to get together for cookouts, picnics and celebrations, and these survey numbers portend great things for retailers this year,” said FRF President/CEO R. Scott Shalley. “We continue to see year-over-year increases each shopping weekend in 2017, which shows that the economy is doing well and consumers are feeling confident about their own economic situation and willing to spend more this year.”

According to the annual survey released by FRF’s national partners at the National Retail Federation and conducted by Prosper Insight & Analytics, 219 million Americans plan to celebrate the holiday, or 88 percent of those surveyed. A total of 162 million — 66 percent of those surveyed — plan to take part in a cookout or picnic, spending an average $73.42 per person, up from last year’s $71.34.

The survey found that 65 percent of consumers already own a U.S. flag, 53 percent patriotic-themed apparel such as T-shirts, bathing suits or shoes, and 40 percent own patriotic decorations. Nonetheless, 28 percent plan on purchasing more patriotic items.

When it comes to other activities to celebrate Independence Day, 44 percent of Americans will attend a firework show or community celebration and 14 percent will watch a parade. The holiday weekend is also a popular time for travel, with 32.9 million Americans saying they will head out of town (13 percent of those celebrating), up from 31.1 million from last year. Only 18 percent say the price of gasoline will affect their plans, down from 21 percent last year and a record low since the survey began in 2004. The number who said high gas prices would discourage them from spending for Independence Day peaked at 59 percent in 2008.

ABOUT THE FLORIDA RETAIL FEDERATION
The Florida Retail Federation is the statewide trade association representing retailers -- the businesses that sell directly to consumers. Florida retailers provide one out of every five jobs in the state, pay more than $49 billion in wages annually, and collect and remit more than $20 billion in sales taxes for Florida’s government each year.

ABOUT THE NATIONAL RETAIL FEDERATION
As the world's largest retail trade association and the voice of retail worldwide, the National Retail Federation's global membership includes retailers of all sizes, formats and channels of distribution as well as chain restaurants and industry partners from the U.S. and more than 45 countries abroad. In the U.S., NRF represents the breadth and diversity of an industry with more than 1.6 million American companies that employ nearly 25 million workers and generated 2010 sales of $2.4 trillion. www.nrf.com.