McKinley Climatic Laboratory at Eglin Air Force Base in Pensacola 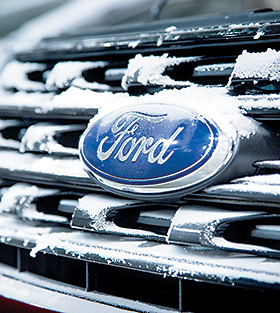 Inside a chamber at the McKinley Climatic Laboratory at Eglin Air Force Base in Pensacola, several Ford trucks sat idling for three weeks in minus-40 degree temperatures to see how they would hold up in extreme cold.

The Ford test is just one of many civilian and military investigations conducted at McKinley, the world’s largest climatic test facility. McKinley’s 55,000-sq.-ft. main chamber can produce temperatures ranging from a high of 170 degrees to 80 degrees below zero and can accommodate aircraft as large as the C-5A Galaxy and Boeing 787.

In five smaller testing chambers, “we can generate snowstorms, sandstorms, rainstorms of up to 15 inches per hour and winds of up to 70 mph,” says Dewayne Bell, the lab’s director. “We also have the world’s largest dust-testing and salt fog testing chambers.”

The lab is named for the late Col. Ashley C. McKinley, who suggested its construction following World War II.

The facility’s main function is to test military aircraft and equipment “from all branches of the military and other branches of the government as well, including Department of Homeland Security, NASA, the FAA,” says Bell.

Because of McKinley’s unique capabilities, the Air Force allows the facility to do contract work for civilian firms, which helps “pay the bills,” Bell says.

The test for Ford was meant to “make sure our truck’s computer software is functioning properly, so that how the truck operates in the lab is how it will operate outside in the real environment,” says Ford supervisor Kirk Parrish.

NumNum, a manufacturer of eating utensils for infants and toddlers, was awarded $50,000 during a recent competition from Innovation Coast, a non-profit that promotes entrepreneurship. NumNum CEO Doug Gonterman says the money will allow the company to move operations out of his Gulf Breeze home to downtown Pensacola. “It will also give us the cash we need to hire people into key positions,” Gonterman says. NumNum’s two main products are GOOtensil, a flat spoon designed for babies learning to feed themselves, and a Beginner Bowl with slanting sides that allow infants to locate their food more easily. Launched in 2013 by Gonterman and his wife, Jessica, the company counts Nordstrom and Buy Buy Baby among its retail clients.

HOLMES COUNTY — The Holmes County Development Commission has approved a lease agreement with a new but unidentified manufacturing company slated to bring 70 jobs.

PANAMA CITY BEACH — The town is seeing a wave of new development, including apartment complexes, residential subdivisions, three hotels and the first major Gulf-front tower to be approved since 2008.

PENSACOLA — Developers Quint and Rishy Studer have bought the SunTrust Tower building in downtown Pensacola from GNL Pensacola. The Studers intend to convert the first two floors of the 31,000-sq.-ft., eight-story building into a community center and will upgrade the remaining six floors for commercial tenants. A proposed $19-million fish hatchery in downtown Pensacola could be completed by late next year. The Florida Gulf Coast Marine Fisheries Hatchery Enhancement Center will be a research and education center expected to produce an estimated 5 million saltwater sport fish each year for release along the Gulf Coast.

PERRY — BioNitrogen, which has filed for Chapter 11 bankruptcy protection, says it will sell its remaining assets to pay off debts. Perry City Manager Bob Brown says the sale means “effectively the end of BioNitrogen.” The company, which announced plans in 2015 to construct a $300-million urea fertilizer plant in Taylor County, owes the city $3 million.

TALLAHASSEE — Pine Dove Farm owner and developer Ira Russack plans to build a 203-acre subdivision with about 130 homes on half-acre lots that feature vegetable gardens. The development is modeled on farm-to-table “agrihoods.”