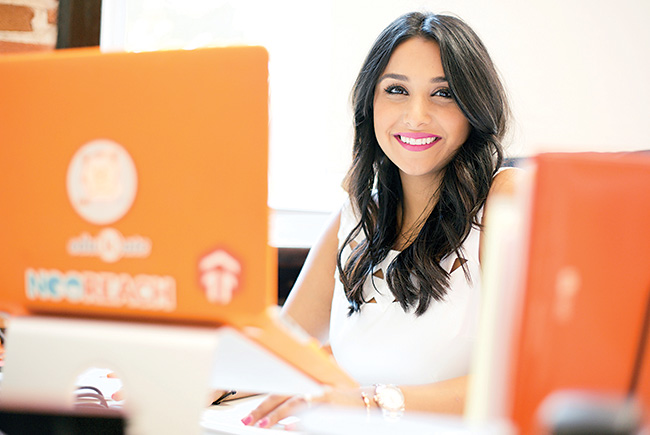 An Orlando woman is challenging the credit card business.

Suneera Madhani is 29, a new mom and the founder of a 3-yearold Orlando company that aims to be the Netflix or Uber of the credit-card processing business.

The company is Fattmerchant, which Madhani launched in 2014 after quitting her job at one of the established companies in the merchant services industry, which makes most of its money by charging merchants an assortment of fees and locking them into long-term contracts.

Madhani’s idea was to do away with fees and contracts in favor of a simplified and transparent subscription system in which retail businesses pay Fattmerchant a flat monthly subscription fee or, for lower-volume businesses, a flat percentage fee. The company says 95% of its customers choose the subscription plan.

The first company to sign on was her husband’s electronics shop on Orlando’s International Drive tourist corridor. But the list of business members has since swelled to nearly 2,000, as subscription pricing disrupts the credit card business in the same way as ride-sharing clobbered taxis.

Fattmerchant processed roughly $5 million in credit-card transactions in its first year, Madhani says, grew to $110 million in 2015 and then to $700 million last year. It expects to top $1 billion this year.

Madhani, the CEO, says Fattmerchant, which has about 30 employees, has raised $2.4 million to date in venture funding, which the new company has invested in developing proprietary technology.

Madhani grew up in Dallas, but her family moved around a lot as she grew up; she says she attended 10 schools in 12 years. But now that she’s settled in Orlando she intends to stay. Her brother moved from California to join Fattmerchant as COO and co-founder, and she and her husband have a 1-yearold daughter at home. All of the company’s investors, she says, are from central Florida.

“We love Orlando. We’re not going anywhere,” she says. “We want to grow the company here and create jobs here.”

Since OUC–The Reliable One’s headquarters became the first Gold Leadership in Energy and Environmental Design (LEED)-certified building in downtown Orlando, the utility has helped others join its ranks. OUC has assisted some of Orlando’s most prominent facilities – like the Amway Center – in achieving the U.S. Green Building Council honor. LEED certification shows a company’s commitment to sustainability and also can boost the bottom line. Water and energy efficiency, green materials and smart design yield lower utility costs, enhanced occupant health and productivity and long-term economic return. Learn more at www.ouc.com/leed

From a 50,000-sq.-ft. warehouse in the University of Central Florida’s Research Park, Luminar Technologies expects to begin production this year on 10,000 “eyes” to be installed in autonomous vehicles. The company, which is based in Silicon Valley but has more than half of its roughly 150 employees in Orlando, says it has developed a new type of LiDAR (light detection and ranging) sensor that can “see” farther than 200 meters at less than 10% reflectivity, a five-fold increase over existing technologies. That gives more time for autonomous driving systems to react: An extra six seconds, according to the company.

BREVARD COUNTY — Lockheed Martin plans to move about 300 jobs from California to Brevard County in 2018 and 2019.

KISSIMMEE — Orlando Health will build a standalone emergency room near Tupperware headquarters on land it bought from Tupperware.

LEESBURG — The Villages will pay $11.8 million to buy nearly 2,000 acres from the city for a future retirement community near Florida’s Turnpike and County Road 470. Meanwhile, a study by LendEDU, a loan servicer, reports that residents of the Villages have the highest average credit score of any community in the country.

ORANGE COUNTY – Valencia College marked its 50th anniversary. Property Appraiser Rick Singh, a Democrat expected to run for county mayor next year, filed libel lawsuits seeking to force the obscure political committees that attacked him and some other local candidates in elections last fall to reveal their donors.

UCF plans to build a $15-million solar array on its campus. The city will host a U.S. Men’s National Team qualifying match for the 2018 World Cup. The “Call of Duty” world championships, a video-game tournament, will be held at the Amway Center in August.

SANFORD — The state, county and city will complete a 27-mile trail around Lake Monroe.