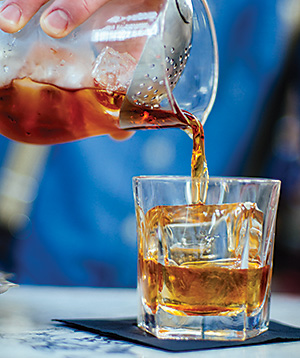 A new ice age in Florida

Once, Florida depended on ice cut and shipped from frozen lakes thousands of miles to the north. Today, the stout brick buildings where Floridians first made ice in the 1920s are being rehabilitated as eateries and distilleries. Meanwhile, in the current restaurant scene, ice itself has become something more than just frozen water ...

St. Augustine has — along with the oldest jail, oldest school house, etc. — the state’s oldest ice plant. The 1927 building has now been refurbished into the Ice Plant Bar, one of the coolest places to drink (and eat quite well) in north Florida, a shrine to craft mixology and a major attraction on the state’s foodie trail.

The old overhead rail that once trucked blocks of ice to shrimpers runs above an elegant turn-of-the-century bar. Drinks are made with different shapes and sizes of ice cut in-house from 300-pound blocks — and include libations made with whiskey, gin and rum from the St. Augustine Distillery, which also operates under the Ice Plant roof. The farm-to-table menu includes local cheese, tomatoes, Wagyu beef and whole fish with fennel chorizo broth.

Other old ice plants across Florida have been restored in various ways. Punta Gorda has the Ice House Pub, restored but no longer producing ice. An old icehouse in Lakeland is set to become a bank branch.

Today’s obsessive barkeeps and equally finicky connoisseurs prefer ice cubes or spheres at least 1½ inches thick to dilute and soften precious small-batch whiskey and craft bitters at a glacial pace. Note: Some prefer their 10-yearold single malts on a singular rock, thank you.

Gourmet stores now sell molds for giant ice cubes and 2½-inch ice spheres, along with freezable cubes of stone and steel. Some demanding bartenders carve their own with chainsaws or crush it with a canvas bag and wooden mallet (crumbled ice is preferred for extra dilution in some fruity or sweet mixed drinks). A few traditional ice houses offer larger cubes.

“More and more bartenders are paying attention to this and treating water as a major ingredient in their drinks. They choose their spirits, their glassware, their juices and mixers, and now they are starting to be equally choosy about their ice,” says Andrew Amron, aka the “Ice Doctor”of Gainesville.

The “doctor” prescribes 1½ and 2-inch cubes plus Collins oblongs for long drinks at Dragonfly Sushi and a dozen more gastropubs and artisanal taverns in central Florida. But he’s a bit of a contrarian. His current drink of choice is a Sazerac. No ice.

The ice bars of northern carnivals are finding a place in the Florida sun. Two chains — Minus 5 Ice Bar and Icebar, which are in Las Vegas, Monaco and the like — have installed glittering bars in Orlando, cooled to sub-freezing temperatures, with icy walls, counters, elaborate sculptures and all ice cocktail “glasses.’’ In Miami, Drinkhouse Fire & Ice Bar aims to attract South Beach clubbers who don fake fur Zhivago parkas, hats and They choose their spirits, their glassware, their juices and mixers, and now they are starting to be equally choosy about their ice,” says Andrew Amron, aka the “Ice Doctor”of Gainesville. The “doctor” prescribes 1½ and 2-inch cubes plus Collins oblongs for long drinks at Dragonfly Sushi and a dozen more gastropubs and artisanal taverns in central Florida. But he’s a bit of a contrarian. His current drink of choice is a Sazerac. No ice. “Ice Doctor” Andrew Amron operates in Gainesville. gloves. A bartender doubles as a fire-eater.

Generally, a 40-minute “experience” in an ice bar costs $15 to $20, or with two drinks, usually icy vodka, around $40. The price includes protective gloves and mittens that allow endless texting and selfies. Not everything is frozen: Adjacent to the ice-bar area are more traditional, and warmer, lounges that encourage longer lingering. In addition to the decadence of indulging in unnatural chill, some ice bars offer space for corporate events, networking, branding seminars and children’s hours.