Wendy Walker steps down as CEO of Leadership, Florida

Wendy Walker says she always saw herself as “a No. 2 person.” Putting herself front and center isn’t her style; you’d never know it, but she dislikes, and avoids, public speaking. “I like being behind the curtain,” she says.

That may seem an odd thing to say for someone who’s run a big statewide organization successfully for three decades, but it’s a great illustration of one of the things that Wendy’s organization, Leadership Florida, tries to teach — that great leaders come in many personality types. And that becoming a leader is a matter of recognizing who you are and exploiting your particular set of skills, not changing who you are to fit a template.

This month, Wendy formally retires after 28 years as LF’s president, the only full-time CEO the organization had until her replacement, Wendy Spencer, took over in April. Spencer has been an executive for private companies, government and non-profits. She ran Volunteer Florida, the Florida Park Service and most recently was CEO of the Corporation for National & Community Service, a $1.1-billion federal agency that oversaw the AmeriCorps program and others.

Leadership Florida, a non-profit, is important because it’s the only organization in the state that works to give local and regional leaders an awareness and understanding of parts of Florida outside their own — and to build a sense of statewide identity in a state with an acute case of multiple-personality disorder.

Each year, the program selects a diverse class of 55 executives who meet on five weekends at different locations in Florida. Each weekend features tours of local institutions and businesses, presentations and meetings, all aimed at building knowledge and understanding of issues that affect Florida. There is much socializing. Friendships form. Each class discovers, by design, how remarkably unique and cohesive it is, creates a group identity — and networks form that benefit Florida and Floridians. 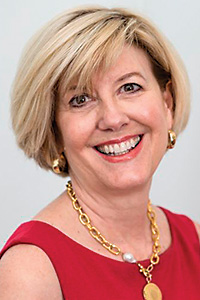 Wendy didn’t start Leadership Florida, but it’s fair to say she invented it. The program was founded in 1982 by the former president of the Florida Chamber of Commerce, Frank Ryll, a leader in his own right, who became aware of a statewide leadership program in another state and thought Florida ought to have one. The program operated with a part-time executive director for seven years. Wendy, a Fort Pierce native and FSU grad, became its executive director in 1989, hired to try to organize and professionalize the group’s alumni activities.

Wendy took that ball, ran with it and then rebuilt the whole playing field. In addition to refining the annual class program, Wendy led the creation of a local government leadership program for the League of Mayors. She created Connect Florida, now in its seventh year, for leaders ages 21-39, and a weekend LF experience called the Executive Leadership program, for CEOs who are new to Florida or their CEO roles. A College Leadership Florida program operated for 17 years until recently.

Together with the Gates Foundation, LF recently started a Leadership in Education program. The first of its kind in the country, the program has 35 participants from around Florida.

The group has also co-sponsored debates during gubernatorial and U.S. Senate campaigns in Florida, along with a 2008 nationally televised debate among Republican presidential candidates.

Wendy, as every leader, has faced challenges. In addition to the constant need to raise funds, she helped negotiate and manage a new operating agreement with the Florida Chamber that put LF more on its own feet. One personal regret involves a program for new state legislators geared at getting the lawmakers to think of themselves as Floridians and get them out of their parochial modes. The new lawmakers loved the program, but subsequent legislative leadership asked that the session be moved from Orlando to Tallahassee, then scheduled the meetings for the same time as budget hearings. No one could attend, and it was clear the leadership preferred a more ideologically oriented approach to indoctrinating lawmakers.

In retirement, Wendy plans to be active in early childhood education issues. She has two grown daughters and a 4-yearold grandson. Her biggest joy and satisfaction at Leadership Florida, she says, was “connecting people” and seeing how those connections benefit others — as when participants in a LF class program learned of an effort in Miami to educate low-income workers about benefits available through the low-income tax credit and spread the program to other parts of the state.

She mentions a scene from one class session. Late one night, in a corner in a hotel lobby, she found a white Republican banker from south Florida engaged in deep conversation with a black Democrat commissioner from Gadsden County. “There just aren’t many opportunities for that,” she says.

“My mantra is that in a time when we are so increasingly siloed, Leadership Florida is one of the few, if not the only, entities that bring together people from different heritage, beliefs and builds bridges of trust.”

It’s a legacy any leader would be proud of.