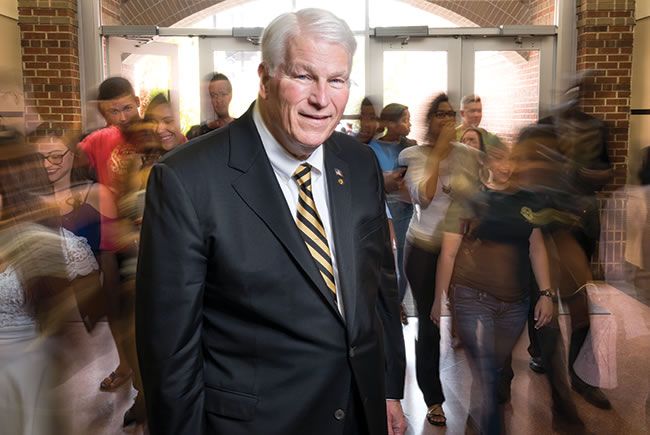 64,000 students aren’t too many for UCF to handle, says John Hitt, who believes that quality education and a massive student body aren’t mutually exclusive.

In the early 1950s, when he was about 10, John Hitt went to work at his parents’ print shop. Wheeler’s Printing Co., named after its original owner, printed posters, handbills and envelopes for trade unions. It occupied the first floor of a two-story building, beneath two apartments, in a neighborhood just southwest of downtown Houston.

Hitt’s father ran the shop, though he still carried his union card from his days as a typographer. His mother was a bookbinder. Hitt’s first job was to reclaim the metal that was used to make the letters and characters that went onto the press that printed the documents. Every Saturday morning, he’d fill up a big steel pot with a blend of lead, zinc, tin and antimony, melt it down and pour the mixture into 25-pound ingots. “We’d be up to our elbows in benzene,” says Hitt, now 76. “My gosh, where was OSHA when we really needed it?”

One day, after Hitt had learned to operate the presses, his father offered to pay him a dollar for every 1,000 copies he made — provided the copies were good enough that customers would pay for them. “I think that was a great life lesson to encounter as a kid,” Hitt says. “You can imagine a young kid — ‘Boy, I want to have all the copies I can possibly produce here.’ Well, you know if you try to go too fast, the customer is going to say, ‘I don’t think so.’ And however many hours you worked, it was for nothing.”

Hitt, who studied and taught psychology for many years, draws a straight line from that print-shop lesson in Houston to his presidency at the University of Central Florida in Orlando. His tenure, in many ways, has been devoted to the premise that quantity and quality are not — and should not be — mutually exclusive in higher education.

He makes a case for having achieved both during his 25 years as president, the longest tenure of any top university leader in Florida. Once an unremarkable commuter school in east Orlando, UCF has become one of the largest research universities in the country, with an enrollment now topping 64,000. Undergrads, graduate students and medical school students study online and at a dozen campuses. More than 40,000 students enroll in the summers.

At the same time, the caliber of student has climbed. Freshman entering UCF have average SAT scores of 1262 and weighted GPAs of just over 4.0. Nearly 250 National Merit Scholars are enrolled in the school, second-most among Florida universities. And the university’s graduation rate is substantially higher than the national average.

Hitt frames UCF’s growth as a moral imperative. Public universities, he says, have an obligation to raise the level of education in their communities, ticking off the benefits that flow from college degrees, ranging from higher incomes to better parenting.

“We look at students and say we wish we could take everyone who has a real chance of getting a baccalaureate degree,” he says. “Other institutions are looking for ways that they can portray themselves as being highly selective — and the way you do that, of course, is you show that there are people who want in that you won’t let in.

“The people of this state,” Hitt adds, “did not put this university in Orlando to keep people out of college.”