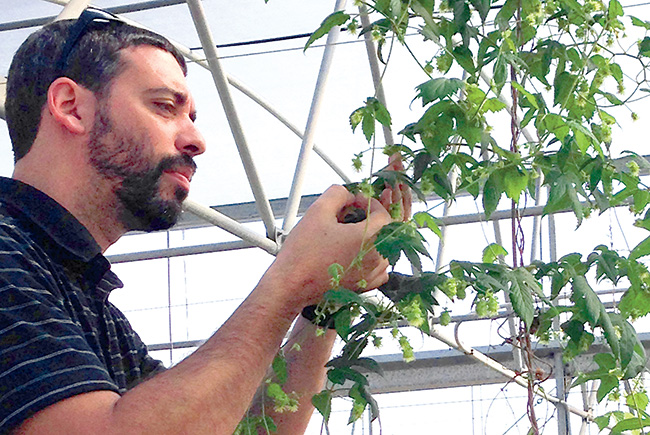 Hop to it: UF professor's project leads to Florida-produced hops

Brian Pearson was in England five or six years ago, vacationing with family after finishing his Ph.D. They stopped at a small pub in London, where Pearson, who usually prefers Miller Light, decided to try something different.

“They had an English bitter that was just so amazingly complex and just delicious,” Pearson says.

He came home and couldn’t find the beer anywhere, so he taught himself to brew his own. Pearson learned about the importance of hops, the flowering plant that gives beer its flavor, and read that hops couldn’t be grown in Florida — the days were too hot, humid and full of pests and disease.

That struck Pearson, a professor at the University of Florida’s Institute of Food and Agricultural Sciences whose doctorate is in environmental horticulture, as a challenge. He ordered a few plants and started growing. An undergrad in one of Pearson’s classes, at UF’s Mid-Florida Research & Education Center in Apopka, joined him, turning it into a thesis.

Their work led to a $158,000 research grant last year from the Florida Department of Agriculture and Consumer Affairs, through which Pearson is now growing about 20 varietals of hops to learn which, if any, hold the most commercial promise for Florida farmers.

The hops are now growing up 20-foot-tall trellises that have been erected on a halfacre field at the Mid-Florida Center, which Pearson, who moved to Apopka as a teenager, used to drive by regularly while in high school.

Pearson, 36, says the work has already proven that hops can, in fact, be grown in Florida. “Now the questions are, what are the yields, and is it economical?” So far, the Florida plants produce fewer wet hops per pound than those grown in more ideal northern climates, though they are not yet mature and they can be harvested more frequently each year. Pearson estimates that between 10 and 15 Florida growers have put small hops fields into production.

Earlier this year, Pearson sent about 21 pounds of hops harvested in January from an IFAS greenhouse to First Magnitude Brewing, a Gainesville microbrewery that used them to produce one of the first Florida hops beers. The brewery named it Apopka Hops Pale Ale.

DAYTONA BEACH — Minto Communities and Jimmy Buffett’s Margaritaville Holdings plan to build a series of “active” senior communities, beginning with a development dubbed Latitude Margaritaville at I-95 and LPGA Boulevard in Daytona Beach.

OCOEE — City leaders approved an ordinance prohibiting people from begging for money at intersections and requiring them to register with the city before begging on sidewalks.

ORLANDO — Darden Restaurants, the parent company of Olive Garden, is buying Texas-based Cheddar’s Scratch Kitchen chain for $780 million. » The University of Central Florida and HCA won approval from the Board of Governors to build a 100-bed teaching hospital next to the University’s College of Medicine. Meanwhile, UCF set a goal of raising $100 million in hopes of making itself less reliant on state taxpayers and the Florida Legislature. » Universal Orlando plans to build as many as 4,000 hotel rooms on the site of the former Wet ’n Wild water park, according to planning documents filed with the city. » Professional wrestler Hulk Hogan opened “Hogan’s Beach Shop” along the International Drive tourist strip. » Car burglaries in the I-Drive corridor rose 165% in 2016 and continue to climb in early 2017, according to an analysis by the Orlando Sentinel. » Ace Cafe, a popular diner operator in England, opened its first U.S. location in downtown Orlando. » Surviving victims of the June 2016 mass shooting at the Pulse nightclub and families of deceased victims sued both the wife and the former employer of shooter Omar Mateen. » Fields Auto Group broke ground on a multistory dealership overlooking I-4 that will sell Lamborghinis, Bentleys and Rolls-Royces. » Construction supplier ABC Supply bought 132,000 square feet of warehouse space.

Orlando-based startup FleetZoo has developed a planning and optimization software to help companies better manage their fleets of vehicles. The company says its software helps businesses determine the best sequences for drivers to follow when completing their orders — while factoring in extras such as customer preferences — with real-time monitoring and adjustment.

» Mark Harmon was appointed executive director of the Arts & History Museums-Maitland. Harmon, who previously ran a history museum in Oregon, replaces Andrea Bailey Cox, who left for another job.