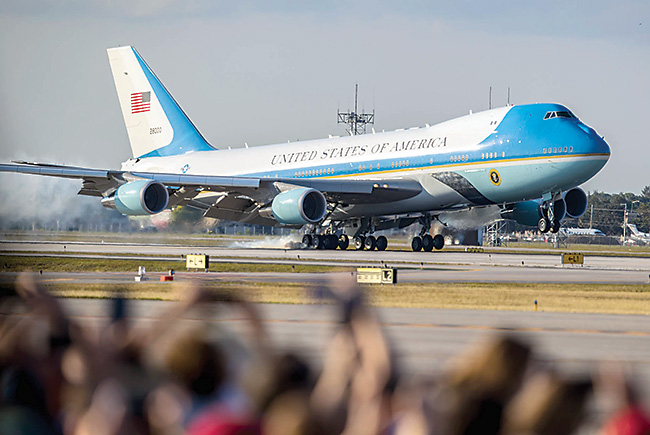 President Trump’s frequent visits to Palm Beach and consequent federal restrictions on general aviation nearby have proved a bane to local airportbased businesses — but a boomlet to outlying airports.

In February, when the president’s weekend visits occurred most frequently, general aviation traffic was down 13.5% at Palm Beach International. (There was no impact on commercial flights.) But at Boca Raton’s municipal airport, the number of flights jumped from 200-250 on a normal weekend in high season to 400-500 during presidential visits.

Palm Beach County Glades Airport, at Pahokee on Lake Okeechobee, Witham Field in Stuart and Fort Lauderdale Executive also saw a spike in activity. All sit outside the 30-nautical mile ring around the visiting president’s home inside which flights are restricted. Boca’s airport and North County near Palm Beach Gardens sit within 30 miles but are outside an even more restrictive 10-mile ring that hampers general aviation at Palm Beach International and nearby Lantana during visits.

For the county and city governments that own the airports, the extra activity means little in the short term — at best a share in incremental fuel sales made by the operators who lease space at the airports.

For the operators themselves, the increase in business is more meaningful, but for some it’s a wash. Fixedbase operator Signature Flight Support, for example, might lose out at Palm Beach International when Trump is in town but gain at its operations at Boca, North County and Pahokee.

Some, even at airports already maxed out for space, see a long-term opportunity in displaced pilots, planes and passengers. Boca city airport authority Executive Director Clara Bennett met with the economic development arm of the local Chamber to talk about marketing the Boca area to those flying in. “This is an opportunity to reach out,” Bennett says.

Greg Stokus, manager of Witham in Stuart, which saw its share of hardship from President Obama’s golfing getaway visits, says the shift in activity to his airport provides some opportunity but cautions that aviation is driven by convenience and location. “I don’t think it’s going to be a windfall,” Stokus says.

FORT LAUDERDALE — The Museum of Science and Discovery plans a $35-million renovation and expansion. » Silver Airways expanded its Florida-Bahamas operations with flights from Tampa and West Palm Beach to Bimini and ended service to Cuba.

JUPITER — Kelly Slater Wave, a company founded by the legendary Florida surfer and owned by the entity that owns the World Surf League, proposes building Surf Ranch Florida, a wave pool big enough for league events, in an industrial park west of Jupiter.

MIRAMAR — Tropical Financial Credit Union will be the surviving institution in its merger with Miami-based Financial Federal Credit Union, resulting in a cooperative with more than 60,000 members and more than $700 million in assets.

SOUTHEAST FLORIDA — Broward College and Indian River State College were named finalists with distinction and were awarded $100,000 each in the national 2017 Aspen Prize for Community College Excellence.

WEST PALM BEACH — Houston Astros owner Jim Crane, through his Houston Baseball Partners, paid $6.5 million to buy one of the three office buildings at the Forum office complex from CP Forum. It will convert the building into a 160-room hotel.

Engineer Jonathan Azevedo had a yellow labrador that was scared of storms and had related anxiety. He and fellow engineer Chris Lightcap came up with a solution, a dog den that deals with the drivers of animal anxiety by using technology such as vibration isolation, soothing music, noise cancellation and reduced light combined with comfort and security. Their ZenCrate raised $145,784 from Kickstarter in 2016. From its manufacturing center in Sunrise, ZenCrate began shipping dens to its first round of backers in February. The four-employee company plans to hire up to 20 people by year-end. ZenCrate says 32 million dogs in the nation have some type of anxiety.