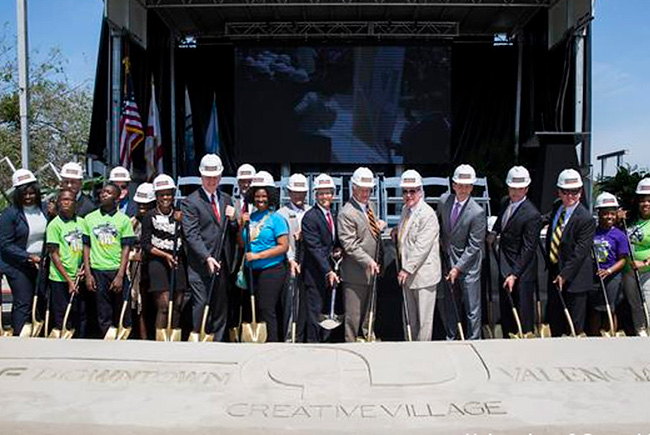 On Thursday, May 11, 2017, children from the Parramore community helped Central Florida leaders sink shovels into the dirt today at a groundbreaking ceremony ushering in a transformative campus that will soon rise in downtown Orlando. 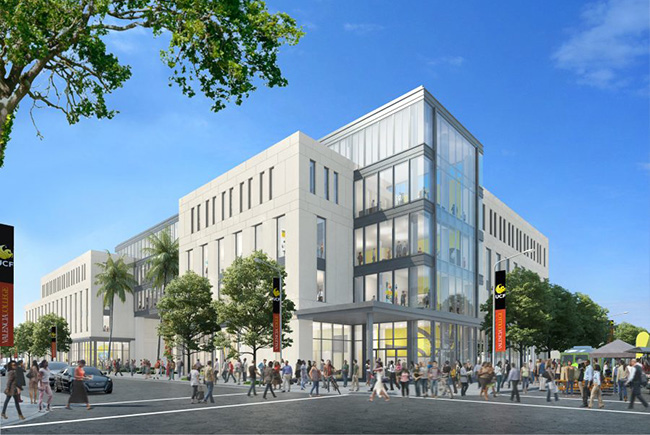 Rendering of the Dr. Phillips Academic Commons, which will be the first building to be built at the new campus the University of Central Florida will share with Valencia College.

Children from the Parramore community helped Central Florida leaders sink shovels into the dirt today at a groundbreaking ceremony ushering in a transformative campus that will soon rise in downtown Orlando.

Dr. Phillips Academic Commons is the first building to be built at the new campus the University of Central Florida will share with Valencia College. The campus is expected to serve 7,700 students from both institutions when it opens in 2019.

The groundbreaking was a chance for the community to celebrate the campus’ beginnings – and the changes it will bring not only to downtown Orlando but to future students’ success.

“This innovative campus will offer a bold new avenue for uplifting lives and livelihoods of students from the Parramore community, from Central Florida and from throughout our Sunshine State,” UCF President John C. Hitt said. “It will provide area employers with talent that will invigorate and reshape the workplaces of tomorrow. And it will energize the rising downtown of the No. 1 tourist-destination city in America. With today’s groundbreaking, we begin a future of greater prosperity in Central Florida.”

Valencia College President Sandy Shugart said Valencia and UCF will work with the community to build a campus that positively impacts the future of its residents and neighbors.

“We’re building something unique here,” Shugart said. “But the real measure of a college or university isn’t defined by its buildings, but how well it serves those within them. We’re determined to make a difference in the life of this community.”

Dr. Phillips Academic Commons will be the center of campus, a dynamic building with classrooms, collaborative space and an open-air courtyard. The four-story building is designed to provide a full college experience from the first day it opens in Creative Village, a new high-tech neighborhood sprouting from the former site of the city’s old Orlando Magic arena.

Orlando Mayor Buddy Dyer called the campus a “game-changer.” Thousands of college students will bring a vibrant, 24/7 energy to downtown, and the campus will kick-start further development in the Creative Village $1 billion private-public partnership.

“The new UCF Downtown campus serves as a catalyst for the 68-acre Creative Village, which will further our revitalization efforts in downtown and Parramore. UCF Downtown will be as impactful to Orlando as the construction of our community venues, Medical City and SunRail,” Dyer said. “The City has partnered with UCF and Valencia to bring the vision for the downtown campus to reality because it brings new educational opportunities for residents of Parramore, all while creating 2,000 new jobs and a more than $200 million impact on our economy each year.”

The presence of UCF, Valencia College and a new Preschool-8 school built by Orange County Public Schools will make it possible for children to progress from kindergarten to graduate school in the same community. And the downtown campus will be a source of job training, workshops and more for neighborhood residents.

“The UCF and Valencia downtown campus is one of District 5’s most transformational projects,” said City Commissioner Regina Hill. “One that will transform lives and our community for decades to come. I could not be more excited.”

Brenda March, who manages Orlando’s Parramore Kidz Zone – or PKZ, as it’s often called – said, “Parramore is downtown Orlando’s historic mecca centered around culture, entertainment, education and diversity as a thriving, livable community for the world to model. In my career working with Parramore children and families, I have been blessed to experience the transformation by igniting flames of hope for a brighter tomorrow. UCF and Valencia’s downtown campus will be the educational heartbeat of Parramore and will keep the transformation alive by creating a career path to success.”

Porcha Jones, a junior at nearby Jones High School who lives in Parramore, plans to attend the downtown campus after she graduates from high school.

“As a proud Parramore resident and PKZ student, I’m excited about the campus opening and being able to attend school in my neighborhood,” Jones said. “I want to be a role model for my younger sisters and family, and going to college is important to achieving my goals.”

The 17-year-old was presented with a $1,000 scholarship from UCF and Valencia at the groundbreaking event, which will help her achieve her goal of pursuing a career in sports medicine or becoming a doctor.

Hotelier and philanthropist Harris Rosen’s foundation also will cover the cost of undergraduate degrees for Parramore students if they choose to attend Valencia and UCF, or any other university, state college or vocational school in the state. And successful high school students from Parramore who wish to become doctors and gain admission to the UCF College of Medicine will be able to attend on full scholarships.

The construction of Dr. Phillips Academic Commons would not be possible without the help of its namesake, Dr. Phillips Charities. The nonprofit organization donated the lead gift – $7 million for the project to expand access to the transformational power of a college degree.

“Having students downtown will provide the surrounding community with a wonderful example of hope through education,” Dr. Phillips Charities president and CEO Kenneth Robinson said. “For us, it was important to show UCF, the City of Orlando and the State of Florida our commitment and the importance of this project.”

The four-story building will feature 148,000 square feet of active learning space split between east and west wings along a realigned Livingston Street. The two wings will be connected by a glass bridge on the third and fourth floors. The bridge will hold a pedestrian walkway as well as space for student activities and offices. Viewed from the exterior, the bridge will create a dramatic portal for those entering the campus from the Creative Village.

Also on or adjacent to the 15-acre campus:

Construction will begin this summer on all projects, and the buildings are scheduled for completion by the start of the Fall 2019 semester.