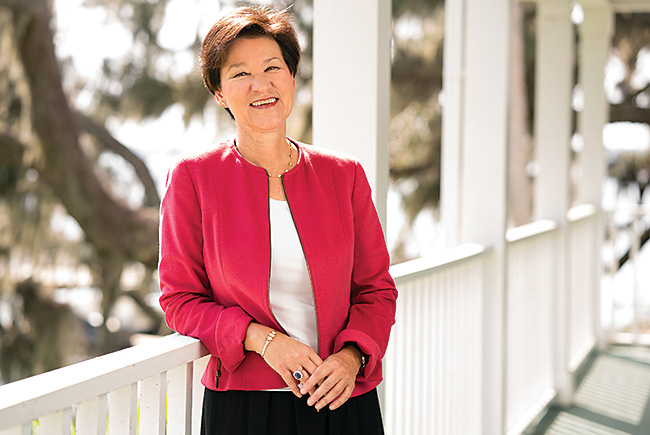 Alex Sink is a ‘Florida Icon'

I come from a famous family, the Siamese twin family. My great-grandfather, Chang Bunker, was one of the twins. He had 10 children — three boys and seven girls — and my grandfather was the youngest son. I grew up in the house that Chang Bunker built. My father still lives there.

Everybody should make a goal to get one of those back roads of Florida books and go exploring. When you drive somewhere, take a different road, a different route. Explore. This is such a phenomenal state.

Banking’s a great career. I woke up every day and I knew I was going to make decisions that were going to make peoples’ lives better.

My parents’ expectations of me were that I could do anything I wanted to do, but education was important. I was a really good student. I loved, just loved, learning. I was a sponge. I never made a B all through high school —straight A’s. That was my reputation — that I was kind of a nerdy math student.

In Florida, I’m concerned that we take our best and brightest Florida high school graduates and we put them in these universities with tens of thousands of people. I hear too many stories of these bright young people who can spend a whole semester basically in their apartment in their pajamas taking online courses.

Anytime you have a lockdown of one-party control, that’s not good for democracy.

Bill (McBride) and I met within months of me moving to Florida in January of 1984. I met him at a business lunch, and we had our first date in May. I was living in Miami, and he was in Tampa. We just had so many things in common, so many common interests. We eventually got married, and I moved over to Tampa, and we had two babies right away.

When I was running for governor, the loudest applause line I got every time I spoke to a group was, ‘Why not be known as the Sunshine State because we have more solar power than anybody else?’ To this day, do you hear anybody talking about that? What a huge, enormous missed opportunity.

I grew up on a tobacco farm in a small North Carolina town that itself has become iconic. I grew up in Mount Airy, also known as Mayberry.

Everybody, of course, when you’re a candidate, everybody has their own idea of what you should say, what you should look like, what clothes you should wear, how your hair should be. I’ll never forget, one time, this guy came up to me and said, ‘When you’re speaking, you squint. You should open your eyes!’ And I’m thinking, ‘I can’t. These eyes are inherited.’

My mother was a perfectionist. Growing up, everything had to be perfect. That’s not so good. I didn’t raise my children that way.

At one point in time, Bill was the managing partner of the largest law firm in the state, and I was president of the largest bank. We were both on the cover of Florida Trend [“Not All Business,” June 1999].

Leadership Florida made a big difference in my life. I was in class four, and I think this year they’re up to class 35 or something. It’s one of the best and most important statewide leadership organizations in Florida.

The year I lost to Rick Scott, I lost by one percentage point. It was the closest gubernatorial election in Florida history. Every other Democrat that year, because of the Tea Party, lost by 10 points, but it didn’t matter. I didn’t win. I had all these dreams and hopes and visions for the future, and I didn’t get to do it. It was depressing. We had our hopes and dreams dashed.

My favorite book of all time is ‘A Land Remembered’ by Patrick Smith. I just sent a copy to a newcomer to Tampa, and I said, ‘OK, first thing you have to do is you’ve got to read this book.’ It gives you such a flavor for the history of Florida.

I’ve always said that, in my next life, I want to come back as a Florida tour guide.

We found Bill dead from a heart attack in 2012. It was totally unexpected. I don’t like being a widow. Building a new life is not easy. You wake up every morning and force yourself to get out of bed and put both feet on the ground and keep moving. It’s like you’ve cut your arm off. You look around and say, ‘Where’s my right arm?’ It’s not there anymore.