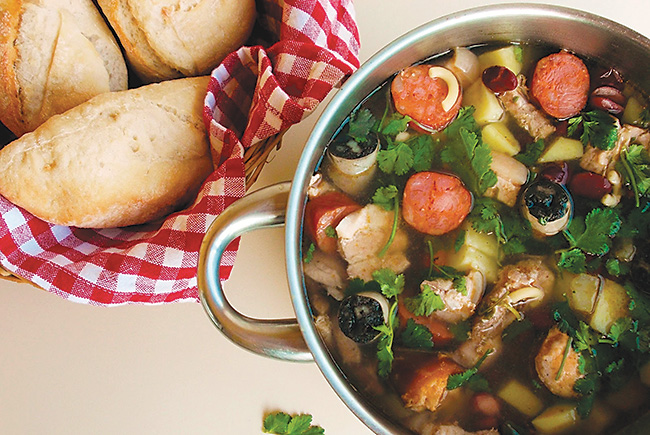 While the cooking of Portugal was once ignored or incorrectly lumped in with Spanish cuisine, that’s no longer true in Florida. Portuguese and Spanish cuisines can be similar, but their differences are delicious, sometimes subtle and sometimes robust, as profoundly different as soulful fado is from fiery flamenco.

From Orlando to Miami, more Portuguese chefs and restaurateurs are expanding, polishing and serving a modern, upscale taste of their heritage.

Seafood comes first, as it should in a country where the Atlantic is never more than 150 miles away. The Portuguese can brag on a distinctive catch of abundant clams, mussels, sardines, squid and the world’s best octopus — steamed, boiled, stewed and often grilled.

Then there’s the beloved bacalhau — big, white, salted fillets of cod — which Portuguese fleets brought back from the Grand Banks and became a favorite from Italy to China. No one cooks cod, fresh or dried, like the Portuguese, who often give bacalhau its own corner of the menu — separate and larger than the regular seafood section.

At the Old Lisbon restaurants in Fort Lauderdale, Coral Gables and now Sunny Isles, the bacalhau menu offers a dozen preparations. Have your cod with potatoes, tomatoes, peppers or clams; shredded in stews; or baked with heavy cream, garlic and cheese in bacalhau com natas, a grand old classic.

That’s not counting the pasteis or coquetas de bacalhau, the favorite appetizer in every Portuguese restaurant.

Portuguese cooking is also rooted in the land, in the earthy sustenance of eggs, potatoes, beans and blackeye peas as well as beef, pork, chicken and sausages (chourico, linguica and longaniza). Ingredients from the land often combine heartily with seafood in dishes like white bean stews with clams and sausage.

Not too far away in Sunset and Doral is another Old Lisbon, the slick new Blue Lisbon, and Teixeira, the newest bastion of one Florida’s best known Portuguese chefs.

At Lisbon, which opened last year, chef Rui Borges delivers the full range of bacalhau, potatoes and olive oil, plus classic egg tarts and flambeed chourico. In addition, Borges and Sandra Andrade have the Adega Grille on International Drive with both Portuguese and barbecue. Also in the Disney/Universal zone is Galletto.

Palm Harbor BBQ-Grill made its name first by firing up the grill, but it also speaks and cooks Portuguese fluently, including pork cubes and clams as well as pork ribs from the grill and grilled cod, squid and octopus.

That’s a reminder to ask any restaurant for the exceptional red wines that modern vineyards now make, as well as fortified ports. Or a bottle of vinho verde with a splash of bubbles.

Iberian Rooster in St. Petersburg, in a flashy contemporary rehab of an old Kress dime store, has perhaps the most unusual menu. Owner Russell Andrade, an opera singer, cooks up a modern sampling of Portuguese cuisine that he calls colonial Portuguese fusion.

The Rooster’s chef makes traditional puffs of cod croquettes. He also uses spices and traditions as varied as piri piri chili pepper from Madagascar and Mozambique, the curry flavors of Goa and odd Euro- Asian combinations of duck breast with a shrimp paste-tamarind glaze from Macau.

Wherever you find Portuguese soup, stay for dessert, some of the Europe’s best pastries, and the unbeatable custard tart.