On January 25, 2017, President Donald Trump issued an executive order detailing aggressive efforts to deport undocumented immigrants and calling for the immediate construction of a border wall with Mexico.1 President Trump’s order threatens to withhold federal funds from “sanctuary jurisdictions,” state and municipal governments that fail to carry out this order and honor federal immigration detainers.

Questions regarding the legality of President Trump’s order has prompted many local governments to resist the implementation of the executive order.2 As of February 10, 2017, about 226 local municipalities, four states, and Washington D.C. can be considered “sanctuary jurisdictions.” 3 In Florida, six counties have opposed the implementation of immigration detainers: Broward, Hernando, Hillsborough, Palm Beach, Pasco, and Pinellas counties.

It is important that local officials consider the subsequent loss of local and state tax contributions from undocumented immigrants when deciding whether to advance the Trump administration’s mass deportation efforts. Undocumented immigrants currently contribute more than $11.6 billion to state and local taxes nationwide.4 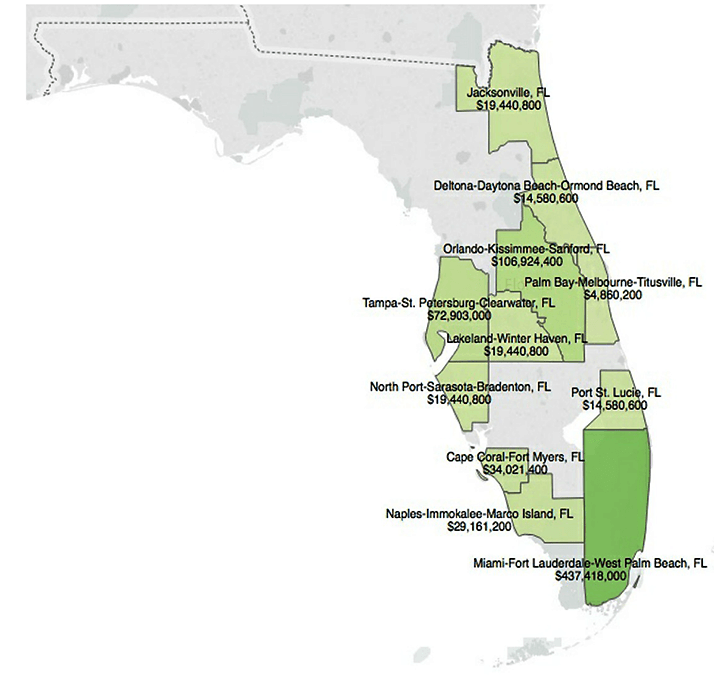 Data show that Florida metropolitan areas benefit from millions of dollars in local and state taxes from undocumented immigrants. In particular, undocumented immigrants contribute more than $437.4 million in taxes to the Miami-Fort Lauderdale-West Palm Beach metro area and nearly $107 million to the Orlando-Kissimmee-Sanford area. Even relatively low density metro areas like the Naples-Immokalee-Marco Island area receive over $29.1 million.

The estimated local and state tax contributions of undocumented immigrants point to the importance of undocumented immigrants to their communities and to the broader economy. Immigration has been shown to raise productivity, increase economic output,5 and raise innovation.6 Furthermore, regions that receive more immigrants tend to grow faster7 and benefit from improved institutions.8 According to the National Academies of Sciences, Engineering and Medicine, immigration to the United States from 1990 to 2010, both legal and unauthorized, produced net benefits worth $50 billion a year to the native population.9The National Academy report also shows that in 2015 alone, the 26 million first-generation immigrants in the U.S. labor market contributed $2 trillion to the American economy.

Furthermore, the tax and economic benefits of immigrants would further increase if undocumented immigrants in the U.S. were granted a pathway to citizenship.10 However, the U.S. Congress has yet to pass comprehensive immigration reform legislation and the Trump administration is moving decidedly to increase deportations and limit legal forms of immigration.

5) National Academies of Sciences, Engineering, and Medicine. 2016. The Economic and Fiscal Consequences of Immigration.

7) Lewis, Ethan and Giovanni Peri. 2014. Immigration and the Economy of Cities and Regions.

11) Estimates based on data from: Pew Research Center. 2017. Estimates of Unauthorized Immigrant Population, by Metro Area, 2014.  and Institute on Taxation and Economic Policy. 2016.

A PDF version of this report is available here.