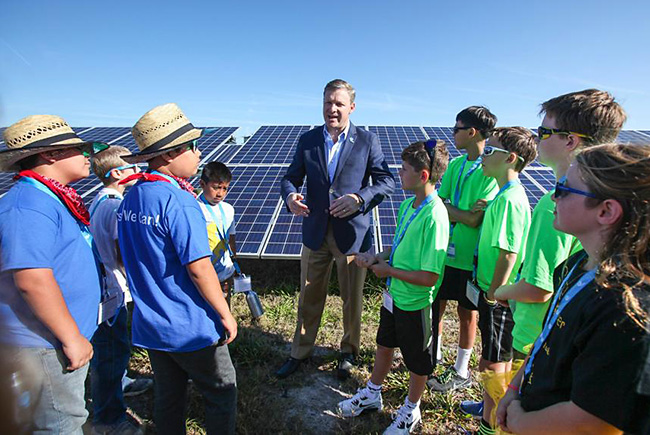 FPL President and CEO Eric Silagy talks to students from around the state at the FPL Manatee Solar Energy commissioning in Parrish on Monday.

With FPL's ability to build large-scale solar cost effectively, the new solar power plants are expected to produce millions of dollars in net savings for FPL customers over their operational lifetimes

"We have been working hard to drive down the costs of adding solar so we can deliver even more zero-emissions energy to all of our customers. As the first company to build solar power generation cost effectively in Florida, we are proud to continue leading the advancement of affordable clean energy infrastructure. We have proven that it's possible to cut emissions and deliver reliable service while keeping electric bills low for our customers," said Eric Silagy, FPL president and CEO, during a celebration at the FPL Manatee Solar Energy Center, one of the company's three most recently completed solar power plants.

FPL consistently ranks as one of the cleanest, most reliable energy providers in the nation, and the price that FPL's typical 1,000-kWh residential customer pays for electricity continues to be less than it was more than 10 years ago and well below the latest national average. Furthering this trend, the new solar energy centers FPL plans to build are projected to be cost-effective over their operational lifetime, producing millions of dollars in long-term net savings for FPL customers.

Each of the eight new solar plants will be 74.5 megawatts in capacity for a total of nearly 600 megawatts, which is enough to power approximately 120,000 homes. The plants will be located at sites across Florida, including three previously announced locations in Alachua, Putnam and DeSoto counties. The locations of all of the new sites will be announced in the coming weeks.

Construction is expected to commence this spring. During peak construction, an estimated 200 to 250 people will be working at each site.

"A year ago, I stood here as FPL broke ground on this solar site, marking the start of the installation of one million solar panels that are now producing zero-emissions energy," said Eric Draper, executive director of Audubon Florida, at the celebration today. "An additional eight new solar energy centers is a major step toward reducing carbon emissions and saving water, benefitting the earth and all Floridians."

Building on FPL's long-standing commitment to STEM (science, technology, engineering and math) education, the celebration event also included a solar-powered competition co-sponsored by the Florida Solar Energy Center. Nearly 50 teams of students in grades 4 through 12 from schools across the state participated in the competition, building solar ovens, solar race cars and other innovative projects.

Today, FPL is cleaner than the carbon emissions goal set by the U.S. Environmental Protection Agency's Clean Power Plan for Florida to meet by 2030, while the company's typical residential customer bills are among the lowest in the nation.

In addition, FPL has installed small-scale solar arrays for more than 100 Florida schools and other educational facilities. The company also sponsors 50 robotics teams or clubs and a traveling science show that performs for approximately 80,000 grade school students each year.

Florida Power & Light Company is the third-largest electric utility in the United States, serving approximately 4.9 million customer accounts or an estimated 10 million people across nearly half of the state of Florida. FPL's typical 1,000-kWh residential customer bill is approximately 25 percent lower than the latest national average and, in 2016, was the lowest in Florida among reporting utilities for the seventh year in a row. FPL's service reliability is better than 99.98 percent, and its highly fuel-efficient power plant fleet is one of the cleanest among all utilities nationwide. The company received the top ranking in the southern U.S. among large electric providers, according to the J.D. Power 2016 Electric Utility Residential Customer Satisfaction Study(SM), and was recognized in 2016 as one of the most trusted U.S. electric utilities by Market Strategies International. A leading Florida employer with approximately 8,900 employees, FPL is a subsidiary of Juno Beach, Florida-based NextEra Energy, Inc. (NYSE: NEE), a clean energy company widely recognized for its efforts in sustainability, ethics and diversity, and has been ranked No. 1 in the electric and gas utilities industry in Fortune's 2017 list of "World's Most Admired Companies." NextEra Energy is also the parent company of NextEra Energy Resources, LLC, which, together with its affiliated entities, is the world's largest generator of renewable energy from the wind and sun. For more information about NextEra Energy companies, visit these websites: www.NextEraEnergy.com, www.FPL.com, www.NextEraEnergyResources.com.