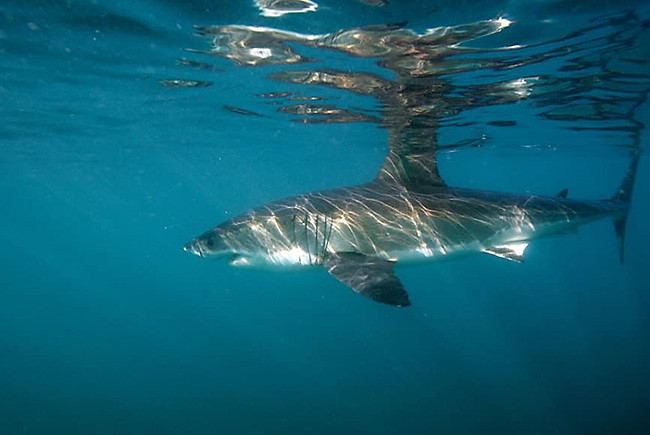 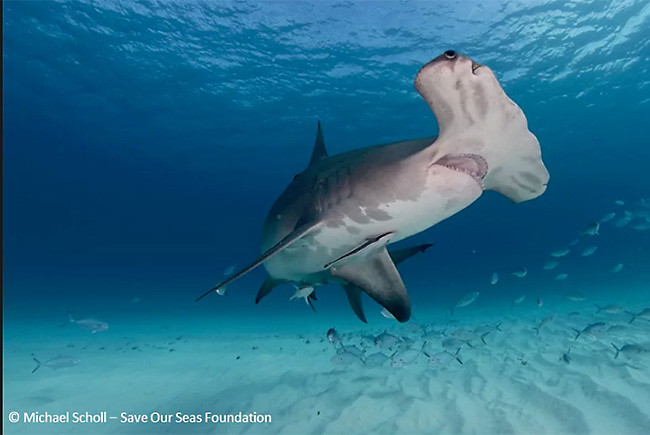 The study was done with participation from Nova Southeastern University (NSU) Save Our Seas Shark Research Center and Guy Harvey Research Institute (GHRI) and the Cornell University College of Veterinary Medicine.

Fort Lauderdale/Davie, FL & Ithaca, NY – A new genomics study of shark DNA, including from great white and great hammerhead sharks, reveals unique modifications in their immunity genes that may underlie the rapid wound healing and possibly higher resistance to cancers in these ocean predators. This research brings us a few steps closer to understanding, from a genetic sense, why sharks exhibit some characteristics that are highly desirable by humans.

White Shark S. Africa -MScholl - White Shark TrustSharks and rays are well known to be highly efficient wound healers, and suspected to show a greater resistance to cancers, though this needs further study. These properties are likely tied to their immune systems, which have been fine-tuned over 400 million years of evolution.

A study by the Nova Southeastern University (NSU) Save Our Seas Shark Research Center and Guy Harvey Research Institute (GHRI) and the Cornell University College of Veterinary Medicine just published in the journal BMC Genomics (lead author, postdoctoral associate Nicholas Marra,) now provides the first evidence that some shark and ray immunity genes have undergone evolutionary changes that may be tied to these novel immune system abilities.

“The immune system of sharks and rays has been battle-tested and evolved over hundreds of millions of years,” said Mahmood Shivji. Ph.D., director of NSU’s Save Our Seas Shark Research Center and Guy Harvey Research Institute. “Using genomics approaches to understanding their immunity genesis is likely to produce many more exciting discoveries, some of which could potentially translate into human medical benefit. Now we have another important reason to make sure we don’t lose these marvelous and ecologically critical animals to overfishing, as is currently occurring in many parts of the world. We’ve just scratched the surface in terms of learning what these ancient animals can teach us, as well as possibly provide us in terms of direct biomedical benefits.”

The researchers found that two shark immune genes, legumain and Bag1, stood out in particular. Both these genes have counterparts in humans, where their overexpression is well known to be associated with a whole range of cancers. Quite notably, the new research shows that these genes in sharks, however, have become modified and have undergone evolutionary natural selection.

cornell-university-logo“Several studies have demonstrated anti-tumor properties of shark-derived compounds in lab studies, said Shivji, who co-led this research with Michael Stanhope, Ph.D., of Cornell University. “It’s intriguing that we are now seeing evidence of evolutionary adaptation in these specific shark immunity genes, which just happen also to be involved in promoting cancer in humans.”

Shivji stresses, however, that’s it’s important to understand that ingesting parts of sharks will not cure or prevent cancer, and in fact it is likely to be damaging to one’s health because of the high mercury content in sharks.

Although the notion that sharks and rays are more resistant to cancers needs rigorous scientific confirmation, the results of this new study raise the enticing prospect that the proteins produced by these cancer-related legumain and Bag1 genes have modified functions in sharks, including the possibility of actually protecting the animals from acquiring cancer.

The Bag1 gene, for example, codes for a protein that in humans is involved in inhibiting an essential natural process called “programmed cell death.” This is important because the programmed cell death process works to eliminate dysfunctional cells, and one of the hallmarks of cancer is the ability of malignant cells to evade this key natural process. So the shark-specific signature of adaptation found in the Bag1 gene may indicate an alternative, or modified role for this important gene – one that could alter its tendency to inhibit programmed cell death in sharks.

WGreat Hammerhead - Bimini -MScholl - SOSFound-healing Related Genes And the novelty of the shark immune system does not end there. What might explain their rapid wound healing abilities while immersed in seawater with its myriads of bacteria which would be expected to quickly cause infections in open wounds?

The shark DNA sequences provide further clues. The research team found that compared to bony fishes, the four species of sharks and ray examined not only had a much higher proportion of genes involved in antibody-mediated immunity, but also that several of the infection immunity-related genes were expressed only in the sharks and rays.

“This higher proportion of genes involved in adaptive (antibody) immunity function could be a key reason behind the infection fighting and fast wound-healing abilities of sharks and rays,” said Professor Stanhope. “Previous studies of the shark immune system have already yielded some surprises in terms of antibody structure, and these new genetic findings further add to the box of biological novelties in this highly successful vertebrate lineage.”

You can find the study published in the journal BMC Genomics.

The Save Our Seas Foundationwas the primary funding organization for this study.

Located in beautiful Fort Lauderdale, Florida, Nova Southeastern University (NSU) is a dynamic research institution dedicated to providing high-quality educational programs at the undergraduate, graduate, and first-professional degree levels. A private, not-for-profit institution, NSU has campuses in Fort Lauderdale, Fort Myers, Jacksonville, Miami, Miramar, Orlando, Palm Beach, and Tampa, Florida, as well as San Juan, Puerto Rico, while maintaining a presence online globally. For more than 50 years, NSU has been awarding degrees in a wide range of fields, while fostering groundbreaking research and an impactful commitment to community. Classified as a research university with “high research activity” by the Carnegie Foundation for the Advancement of Teaching, NSU is 1 of only 50 universities nationwide to also be awarded Carnegie’s Community Engagement Classification, and is also the largest private, not-for-profit institution in the United States that meets the U.S. Department of Education’s criteria as a Hispanic-serving Institution. Please visit www.nova.edu for more information about NSU and realizingpotential.nova.edu for more information on the largest fundraising campaign in NSU history.

About NSU’s Halmos College of Natural Sciences and Oceanography:

Cornell University is unique in the Ivy League for having private and public schools and colleges. Cornell’s mission is to discover, preserve, and disseminate knowledge; produce creative work; and promote a culture of broad inquiry throughout and beyond the Cornell community. Cornell also aims, through public service, to enhance the lives and livelihoods of our students, the people of New York, and others around the world.

About The College of Veterinary Medicine at Cornell University (The College):

The College is consistently ranked among the top veterinary schools in the world, a tribute to its strengths in training students, the breadth and quality of its research, its cutting-edge clinical and diagnostic services, and its extension and outreach programs. The DVM program combines innovative, small-group learning strategies and intensive early clinical experience. The College’s teaching hospitals and diagnostic laboratory impact the health of over 150,000 animals annually.