CAPE CANAVERAL AIR FORCE STATION, Fla. -- The U.S. Air Force's next Space Based Infrared System (SBIRS) Geosynchronous Earth Orbit (GEO) satellite, built by Lockheed Martin (NYSE: LMT), was encapsulated on Jan. 7 at Cape Canaveral, Florida, where it will launch on Jan. 19 aboard a United Launch Alliance Atlas V rocket. Encapsulation refers to the sealing of the satellite in a protective launch vehicle fairing—one of the last steps a satellite must undergo before launch. 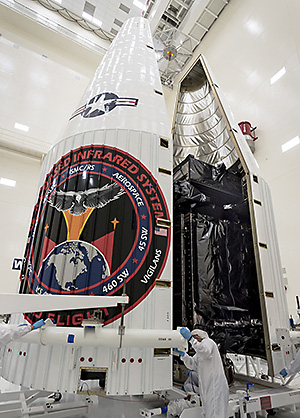 The SBIRS GEO Flight 3 satellite is the latest to join an orbiting network of satellites equipped with powerful scanning and staring sensors that collect and transmit infrared surveillance information to relay ground stations. This information is used by the U.S. military to detect missile launches, support ballistic missile defense, expand technical intelligence gathering and bolster situational awareness on the battlefield. While SBIRS' primary mission is strategic missile warning, infrared data will also be made available for new qualified military and civilian uses at the Air Force's recently opened Tools, Applications and Processing Lab in Boulder, Colorado.

"The satellite's successful delivery and encapsulation closes out a manufacturing process that Lockheed Martin has continued to streamline with each build, driving significant schedule and cost reductions into the SBIRS program," said David Sheridan, vice president of Lockheed Martin's Overhead Persistent Infrared systems mission area. "With its launch, the addition of GEO Flight 3 into the constellation will greatly enhance SBIRS' ability to provide resilient, space-based infrared surveillance capabilities for decades to come."

The satellite's journey to launch began at Lockheed Martin's Sunnyvale, California, facility, where it was built, integrated and thoroughly tested. For its trip to Florida, the satellite was loaded aboard a C-5 Galaxy aircraft at nearby Moffett Federal Air Field.

The next SBIRS satellite, GEO Flight 4, is in storage and will undergo final assembly, integration and test prior to its planned 2017 launch. SBIRS GEO-5 and GEO-6, which are currently in production, incorporate Lockheed Martin's new modernized A2100 spacecraft to dramatically reduce costs and cycle times while increasing the potential to incorporate future advanced sensor suites.

Headquartered in Bethesda, Maryland, Lockheed Martin is a global security and aerospace company that employs approximately 98,000 people worldwide and is principally engaged in the research, design, development, manufacture, integration and sustainment of advanced technology systems, products and services.