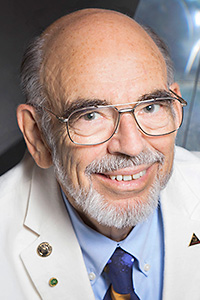 M.J. Soileau is a ‘Florida Icon'

» I never was the brightest star in the galaxy — and I’m still not — but I grew up learning how to work. I think one of the most important things you learn in science is, if you really push on a problem long enough and hard enough, it gives up.

» When I was a child and we were sharecropping, that was the only time I remember being hungry. What I remember about it, really, is the trauma associated with it. One morning, I was hungry and I started to cry because there wasn’t any bread. My mom, who was a very, very forceful lady, one of the most forceful people I have ever known, she grabbed me by the hand and marched me to the company store. She asked for a loaf of bread. The owner of the store was also the person we were sharecropping from. He said no. He would not sell us bread on credit. I thought my mother was going to kill him — I mean quite literally. She grew up cutting sugar cane from the seventh grade on, so she was a person to be reckoned with. We walked out with a loaf of bread.

» In the academic world, particularly in higher administration, if you talk bluntly, you’re considered a grouch. And I speak bluntly.

» Like any Cajun man, when I cook, there has to be a lot of people around to eat. I cook a wicked gumbo and a wonderful suckling pig.

» My parents were very hardworking people, very good people. I was never taught there was any shame in being poor.

» Particularly in the job I just left at UCF, VP of research and commercialization, I spent a lot of time with economic development people and businesspeople, and there’s a lot of happy talk that goes on in those situations. It drives me nuts. The glass might be halfway full, but, well, sometimes, the damn thing is half empty and there’s a hole in the bottom.

» We lived quite literally in the swamp. During that time I had a sister who contracted spinal meningitis at 3 months old. She was an invalid. My older brother, who was two years older than me, he was mentally retarded. In those days, we used that term. Nowadays, we would call him mentally challenged. So, my brother started school before I did and I did his homework. It was first grade, so it wasn’t integral calculus or anything, but I could do math at an early age.

» I have an excellent recipe for gator. No, we don’t batter it and fry it. We marinate it and grill it.

» The truth is, I’m a volatile character. I wear my emotions on my sleeve. I haven’t been able to figure out how to be another way.

» I have three acres of prime swampland on Lake Jesup. People call it the most alligator-infested lake in Florida. And I love it. It’s more Louisiana than Louisiana.

» I grew up doing all kinds of odd jobs. I’d pick cotton, three cents a pound. It turns out it takes a lot of cotton to make a pound. When you’re a farm kid, you work all the time anyway, but my first job, shall we say, outside the home, was when I was in second or third grade. There was a little hotel in my hometown. We didn’t have paved roads yet, and I would water the hotel’s driveway for a nickel to keep the dust down. Then, I learned the value of entrepreneurship. Some guy gave me a dime to wash his car.

» You need some chaos. Otherwise, there’s no creativity.

» I oftentimes defined my administrative job as keeping the next level of management off the necks of the people doing useful work.

» My health right now is excellent. I’ve lost 118 pounds in the last not-quite three years. I did it through diet and exercise. The way I describe it to people is eat less, move more and don’t eat stuff that’s not good for you.

» As a teacher, if you have a student who shows interest in what you’re teaching, you pay attention to that student. It’s a natural response that teachers have to feed that interest. My teachers certainly did that for me when I became interested in astronomy in the fourth grade. There were people who saw something in me and provided me with help and guidance. I was lucky.

» The long-term for Florida is companies being born in Florida from our investment in intellectual capital at our universities. That’s how you get a high-value, value-added, wealthproducing economy, as opposed to a service economy.

» My mother and father learned to speak English as their second language. My ancestors were in Louisiana before Louisiana was part of the United States.

» Being a faculty member at a university, for me, is the best job in the world. What a wonderful life to spend your life learning stuff. And by the way, when you teach, you learn so much more than the students do.

» The lady who was my first-grade teacher did a fundraiser when I graduated from high school to buy me a suit — the first suit I ever had.