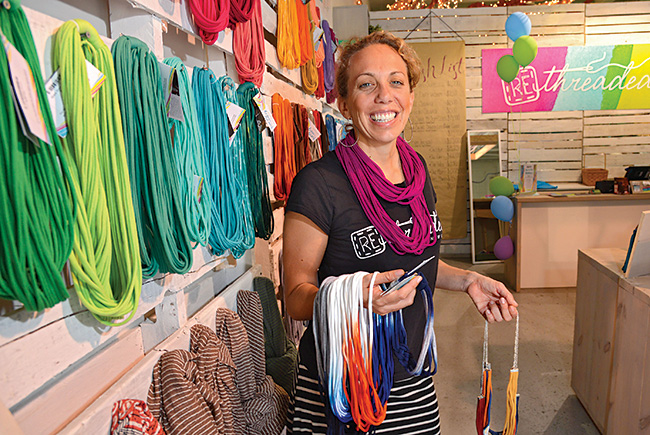 Kristin Keen's non-profit hires women who were involved in sex trade and teaches them to make clothing, accessories and other products.

While working in India for five years, Kristin Keen saw how women in the sex trade seemed to have no way out. Hoping to provide a path to a better life, she started a business to employ them.

“It’s really hard. You can’t start a new life unless you have a new job,” says Keen.

When Keen returned to Jacksonville five years ago, she learned of women involved in the sex trade there. She started a business called Rethreaded and began hiring some of the women to make clothing, accessories and other products.

The women have been trained to work in inventory, sales or production roles.

The non-profit is funded 60% by its sales and 40% from donations. Annual sales are about $500,000, but Keen says the organization has “a really, really aggressive growth plan.” Keen wants to have $5 million in sales and employ 100 women in five or six years.

“We’re five years in. We’ve made it through some hurdles,” she says.

Keen expects a new corporate gift program, in which local companies buy Rethreaded products as gifts for employees, will appeal to Jacksonville businesses.

“They want something that has meaning” for gift giving. “We think we’ve found a niche for that,” she says.

As he worked with clients trying to sell products on Amazon, Travis Mariea noticed businesses were wasting hours trying to match their wares with Amazon’s product codes. In response, he created an app called Easy ASIN that allows sellers to match their products with the correct code, reducing two days of work to two or three minutes, he says. Judges at September’s Jacksonville Startup Weekend awarded EasyASIN first prize in the entrepreneur competition.

» Steve Matthesen joined Acosta as president and CEO. He had been president of global retail for Neilsen. Former Acosta President and CEO Robert Hill became vice chairman of the Jacksonville- based company, which provides sales and marketing services for consumer packaged goods companies.

» EverBank President and COO Blake Wilson will become CEO of the bank after its sale to financial services firm TIAA is finalized next year. Ever Bank will merge with TIAA’s bank subsidiary, with the headquarters remaining in Jacksonville. Current Ever Bank CEO Robert Clements will retire.

GAINESVILLE — The city commission approved an agreement for Phalanx Defense Systems to acquire a former U.S. Army Reserve Center. Phalanx is paying $635,000 over 10 years for the property. The amount includes $335,000 to expand its business.

JACKSONVILLE — Stein Mart CEO Dawn Robertson resigned abruptly after just six months on the job. Robertson implemented several sales and marketing initiatives while leading the Jacksonville-based retailer, including targeting younger customers. However, sales have continued to drop, and analysts and company executives say the initiatives were implemented too fast and may have alienated longtime customers.

Johnson & Johnson Vision Works plans to acquire Abbott Medical Optics for $4.3 billion. In acquiring Abbott, the Jacksonville-based contact lens company gains three ophthalmic products, including tools for cataract surgery. The University Club of Jacksonville, a fixture in Jacksonville for 48 years, is closing. Stache Investments, a company controlled by Jacksonville Jaguars owner Shad Khan, acquired the historic downtown Barnett National Bank building in a foreclosure auction. Stache had loaned an investment group $3 million to redevelop the 18-story building, which served as Barnett’s headquarters before it moved into a new downtown tower in 1990. Southeastern Grocers plans to convert six of its Winn-Dixie supermarkets in the Jacksonville area to the Harveys Supermarket brand. Southeastern Grocers, which also operates the Bi-Lo chain, is tailoring stores to local markets.

Main Event Entertainment is taking over the former Latitude 360 entertainment and dining venue that closed in January amid financial problems. Texas-based Main Event is spending almost $4 million to renovate the 46,000-sq.-ft. entertainment complex. The Wounded Warrior Project laid off 85 employees as part of new CEO Mike Linnington’s plan to streamline the organization, which helps injured service members. Linnington joined the organization in July after former CEO Steven Nardizzi was fired amid reports of wasteful spending. The Jim Moran Institute for Global Entrepreneurship at Florida State University is launching a north Florida division in Jacksonville. The institute offers education programs to train entrepreneurs and business owners.

The Brooks Rehabilitation College of Healthcare Sciences at Jacksonville University is partnering with Baptist Health on a nursing residency program. The Jacksonville Suns agreed to a four-year extension of the minor league team’s affiliation agreement with the Miami Marlins, running through the end of the 2020 season.

OCALA — Rich Cigars, a startup cigar-making company, is applying to become a publicly traded company. The company recorded its first revenue in the second quarter this year, with $2,971 in sales.