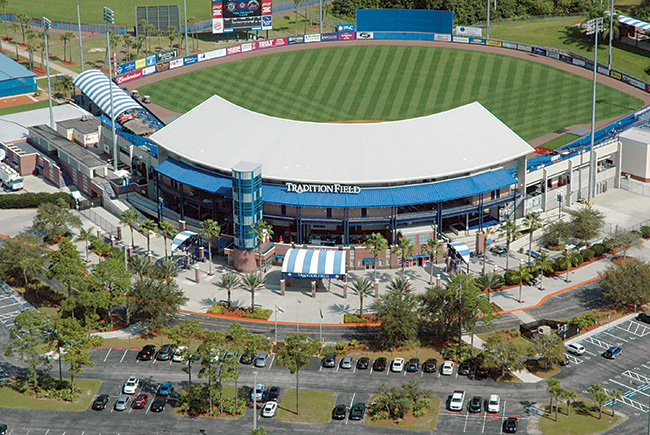 St. Lucie County wants $20 million from the state toward a $55-million renovation of Tradition Field.

Building on tradition: Port St. Lucie hopes a renovated baseball stadium will be a hit

In September, Tim Tebow, age 29, very much a work in progress as a professional baseball player, arrived in Port St. Lucie for instructional league play at the Mets training facility, Tradition Field.

Tradition Field, age 28, also is a work in progress. St. Lucie County wants $20 million from the state to carry out a $55-million renovation of the ballpark, which is home to Mets spring training and the minor league St. Lucie Mets.

A renovation “gives us a first-class, state-of-the-art facility to continue to train and develop our players,” says Paul Taglieri, the Mets’ executive director of minor league facilities. “We’re happy to be here since 1988, and we’re looking forward to staying here throughout the future.”

The Mets would contribute $2 million a year as part of a 25-year agreement with the county. County Administrator Howard N. Tipton says the county has been lining up a project manager and engineering services so that once an agreement is in hand, work can begin. The county expects to start work next year and, working around team schedules, finish in two years.

Tebow’s debut drew credential requests from more than 70 reporters. Some 400 fans came out. Interest cooled in the second week, and the instructional league closed in October as Hurricane Matthew approached. Tebow moved to the Arizona Fall League. But Taglieri was happy for the interest. “Obviously, instructional league is never very well attended,” he says.

Tradition Field is one of three spring training stadiums on the Treasure Coast. The Miami Marlins and St. Louis Cardinals play at Roger Dean Stadium in Jupiter. Palm Beach County and the state are paying for the $145-million, 6,500-seat Ballpark of the Palm Beaches, scheduled to open in 2017. The facility will be home to spring training for the Houston Astros and Washington Nationals.

FORT LAUDERDALE — A federal appellate court overturned a civil judgment against BBX Capital and its CEO Alan B. Levan that barred him from serving for two years as an officer and director of a public company and fined the company $4.55 million and Levan $1.3 million. A lower court, in a lawsuit brought against BBX by the U.S. Securities and Exchange Commission, had faulted Levan and fined him for allegedly misleading investors about the condition of Bank Atlantic, an institution he headed and later sold to BB&T.

PALM BEACH GARDENS — The state Department of Agriculture and Consumer Services fined G4S Secure Solutions $151,400 for submitting forms that identified the wrong psychologist as a mental health screener on more than 1,500 forms allowing employees to carry guns. The practice came to light after it was found that the form for Orlando nightclub shooter Omar Mateen, whom G4S had employed, had listed a psychologist who actually had retired and moved out of state years earlier.

PEMBROKE PINES — Miami developer Terra acquired 17. 2 acres for $15.9 million for the first phase of its Pines City Center, a 47-acre mixed-use center. Nearby, the city is building a civic center. Terra also plans to build the Pines Village Market mixed-use development in Weston and a 121-acre residential community, Botaniko.

WEST PALM BEACH — The Carefree Theatre, a landmark, was torn down to make way for a mixed-use development.

The Centers for Disease Control says about four in 10,000 babies in the United States are born without at least one fully developed upper limb. Such was the case for Chad Coarsey, a bioengineering grad student at Florida Atlantic University who was born without a left hand. In 2015, he met FAU electrical engineering grad student Perry Weinthal, and they collaborated on making a hand for Chad for a class. The project turned into a non-profit company, Bionic Glove Project, housed in FAU’s Tech Runway incubator and funded in part by the local Quantum Foundation. Manny Papir, the company’s executive director, says the company’s glove costs about $1,500, compared to six figures for a state-of the- art prosthetic. “The children really take to this product because they can pick the color. I can tell you the favorite color is glow-in-the-dark,” Papir says.

He takes over in January. FAU also appointed astronomer, professor and researcher Ata Sarajedini dean of its Charles E. Schmidt College of Science. He was associate dean for natural science and mathematics and associate dean for research in the College of Liberal Arts and Sciences at the University of Florida.

» Palm Healthcare Foundation President and CEO Andrea Bradley retired from the post she held at the West Palm Beach foundation since 2012.