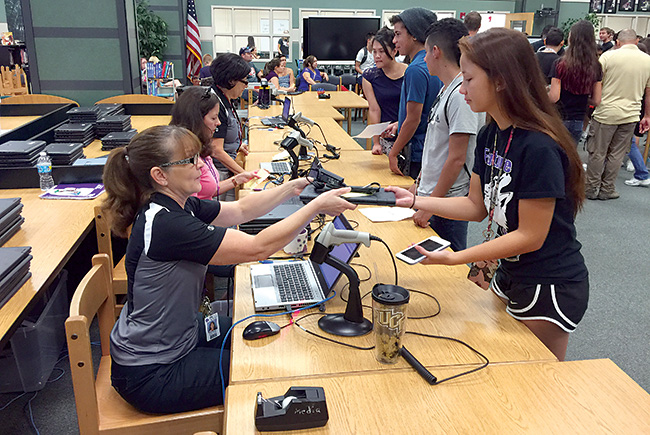 Orange County is on track to provide every student with a computer.

Three years ago, Orange County Public Schools used a pilot program to distribute 8,000 computers to students at three of its 126 elementary schools, three of its 35 middle schools and one high school.

The pilot included not just laptops, but also notebooks, tablets and other equipment, and an assortment of operating systems, including iOS and Windows.

Eager to avoid the experience of the Los Angeles Unified School District, where a botched plan to rush iPads into the hands of every student ultimately cost the superintendent his job, the Orange County district proceeded carefully — after a year it expanded the program incrementally to a few more schools.

Then, this summer, the county announced that it distributed nearly 75,000 computers to students. That includes a computer for every high school student — making Orange County the first district in central Florida to achieve that milestone and, county officials say, the first big urban district in the state.

There are still textbooks in the classrooms, but students no longer have to lug them to and from school.

“I think we have been shocked at how smooth and seamless it’s been,” says Orange County School Board Chairman Bill Sublette.

The $250-million project, which has been dubbed “LaunchED,” will continue to grow; Orange County hopes to have computers distributed to all of its roughly 200,000 students within the next five years. The county is paying for the project through general fund money earmarked for textbooks and through a half-cent sales tax for capital spending that local voters agreed to extend in a 2014 referendum.

“Many of our students do not have laptops at home, and so now we have put the tools in the hands of all of our students, leveling that playing field,” says Leigh Ann Bradshaw, Orange County’s executive area director for high schools.