The first residents of Babcock Ranch (rendering) are expected to move in early next year. 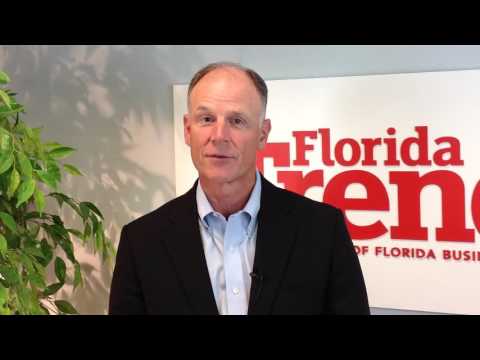 Babcock Ranch: A place in the sun

Babcock Ranch's solar center will be ready for the community's first residents next year.

It’s been almost a decade since developer Syd Kitson first approached Florida Power & Light about his plans to build what he envisions as the country’s most sustainable community at Babcock Ranch. By the end of this year, a key component of the new town will finally be up and running: The 74. 5-megawatt FPL Babcock Ranch Solar Energy Center will produce enough solar energy to power the Charlotte County community’s planned 19,500 homes and 6 million square feet of civic, commercial and industrial space.

The recession and housing downturn delayed Kitson’s original timeline. But those holdups may have proved to be a blessing in disguise. “Syd and his partners were way ahead of the curve from a technology and pricing standpoint,” says Eric Silagy, FPL president and CEO. “My biggest challenge back then was being able to come up with a way we could afford to do this.”

Kitson agreed to donate the 440 acres needed to build the center. But in the years the project was delayed, the price of solar panels came down while their efficiency went up, making a solar array like the one Kitson imagined much more feasible.

In fact, FPL is currently building not only the solar plant at Babcock Ranch but two more just like it in Manatee and DeSoto counties. Each one will cost less than the 25-megawatt solar facility FPL built in Arcadia in 2009 even though the new ones will be nearly three times its size.

Construction on homes at Babcock Ranch has begun, and Kitson expects that the first residents will move in during the first quarter of 2017. When they do, there will be plenty of solar energy to power their Tvs and air conditioners. Any solar power generated that Babcock Ranch doesn’t use will go onto FPL’s grid. At night or when the sun’s not shining, residents of Babcock Ranch will get their power from a nearby FPL natural gas plant. “The combination of those two is the cleanest form of energy for any town in America,” says Kitson.

“The Solar Energy Center is a great example of what can happen in this state when companies partner together and different groups come together,” says Kitson. “And we’re hoping that the things we’re doing are replicated elsewhere.”

Expanding the Reach of Renewables

Seminole Electric Cooperative has been turning to a variety of renewable resources in order to diversify its energy mix. As the costs for solar energy have come down and demand has risen, the Tampa-based notfor- profit cooperative decided the time was right to start construction on a 2. 2-megawatt solar facility in Hardee County.

The co-op is installing more than 8,000 panels at an existing Seminole natural gas-fired power plant, with construction scheduled to be completed by the end of this year. Seminole’s nine memberowned distribution cooperatives — which collectively serve 1.6 million mostly lower-income people and businesses in 42 Florida counties — will each get shares of the output and can begin marketing that solar power to their customers in the first quarter of 2017.

“There’s the assumption that there is a large first-cost investment that has to be made to achieve LEED certification or be a ‘green’ building. It’s also seen as something that could be complicated or additional work. We work every day to show developers and building owners that it’s not additional work; it’s just more thoughtful work.”
— Taylor Ralph, president, REAL Building Consultants, Tampa

Orlando may be known as the theme park capital of the state, but it’s also making a name for itself as a pioneer in sustainability practices. Much of that success stems from the Green Works Orlando initiative, launched in 2007 with the aim of making Orlando one of the most environmentally friendly cities in the country.

City efforts include the use of a $17.5-million “green” bond to modernize and retrofit more than 55 city buildings, including City Hall, the Amway Center and three wastewater treatment plants. That work will save the city up to $2.5 million per year in energy costs, and those savings will be used to pay off the bond and help pay for projects like the new police headquarters under construction and aiming for LEED Gold status.

The city also has launched a commercial food waste collection program that’s diverted more than a million pounds of food waste from the landfill even though just a fraction of the city’s restaurants and hotels are participating so far. The One Person One Tree program provides residents with free trees to help increase the tree canopy, while the Fleet Farming initiative helps residents turn their lawns into little farms.

There are just 15 of the farms so far, but projections call for at least 200 over the next three years. More than 400 cities around the world have inquired about adopting the Fleet Farming program, and the goal is to scale the initiative to more than 100 cities by 2020.

“Orlando has some of the highest tourism numbers in the world; people are flying in from all over to come to the city. We want to ensure that when they come to Orlando it feels like a progressive city.”
— Chris Castro, director of sustainability, City of Orlando

A New Look at Livestock

Fifth-generation farmer Bryan Beer knew he wanted to keep working with the land, but in a different way than he previously had. The documentary “Food, Inc.” gave him the inspiration to start Waymore Farms three years ago. On his 200 acres in LaBelle, he raises poultry, pork and grass-fed beef using sustainable farming methods that eliminate the need for chemical fertilizers, antibiotics and hormones.

He rotates the animals throughout the pastures, with each variety playing a role in the fertilization process. Chickens, for example, “mob graze” a section of pasture, eating bugs, digging up the ground, and leaving behind manure, a natural source of nitrogen for the grass. Once Beer feels the grass is at its most nutritious height, he brings in cattle. Another group of chickens — the egg layers — comes in behind the cattle. The chickens spread the cow manure, an even bigger source of nutrients that fertilizes the ground and gets the grass growing again. “It’s such an awesome cycle, and it’s 100% natural,” he says. “You’re using what God gave you and maximizing it.”

By allowing the animals to spend their days outside, Beer provides them with a quality of life that leads to a better result for customers, he says. “It’s a simple concept,” he says. “A happy and comfortable animal is going to get less stressed and be more in tune with its surroundings, which will create, hands down, a better product.”

He’s already seen success with his chickens and pork — a cross-breed of wild boar and domestic pig that can withstand the Florida climate — and will introduce turkeys this Thanksgiving season. The quality of what he produces has led to relationships with chefs like Mike Mueller of Café and Bar Lurcat in Naples

Beer plans to start offering tours. “This is the hardest thing I’ve ever tackled in my life,” he says. “But at the end of the day when I can sit back and have conversations to spread the word about what I’m doing, it’s worth it. I look forward to seeing where we are next year.”

Go Green or Pay Up

Incentives didn’t do much to encourage green building in Miami Beach, so the city is trying a new approach. An ordinance that went into effect April 1 requires new construction of more than 7,000 square feet to meet at least LEED Gold or Living Building Challenge certification standards. If not, the developer must pay a fee equal to 5% of the construction costs. (The fee is reduced if the builder achieves LEED Silver or Certified status.) The city will use the money for environmental remediation, restoration projects and other efforts focused on sustainability.

“We have a lot of challenges up ahead,” says Elizabeth Wheaton, environment and sustainability director for Miami Beach. “The objective of the ordinance is to increase the sustainability of new development coming into the city so we have a more resilient building stock. But I do see it as a win-win. If developers don’t want to move forward with green certification, we’ll be able to reinvest the money back into the community where it’s most needed.”