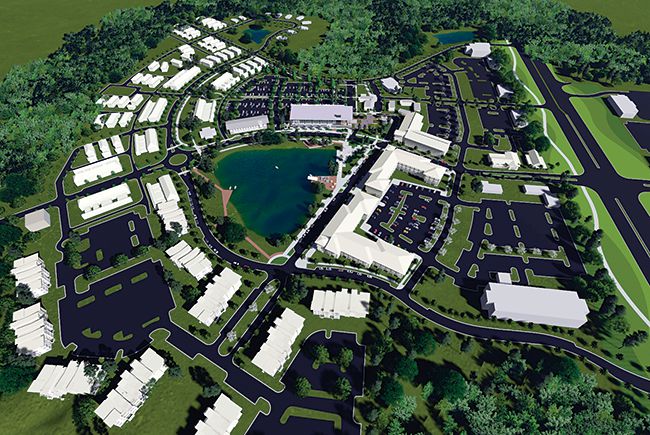 Rayonier is building a headquarters in East Nassau.

Economic development in northeast Florida has generally been concentrated in communities south of Jacksonville. But Chris Corr, president of Raydient, the development arm of Rayonier, says he sees “indications that trend is sort of shifting,” as his firm and other businesses look north to grow.

Nassau County officials are hoping a 24,000-acre site called East Nassau will be a catalyst to attract business — ranging from commercial to retail and residential — to the far northeast corner of the state.

“The growth is just heading in our direction,” says Laura DiBella, executive director of the Nassau County Economic Development Board.

Rayonier, which owns much of the East Nassau land, is already building a headquarters in the development, and DiBella expects to land other businesses soon.

“It can really cover the entire gamut of industry,” she says.

The development is just east of I-95 near where it meets A1A, with easy highway access and links to deepwater ports in Jacksonville and Brunswick, Ga., as well as the Port of Fernandina. The project also has 131 acres available adjacent to railroad lines.

“This is, in my opinion, probably one of the most attractive pieces we have to offer,” DiBella says. She touts the commitment to keep 50% of the project as conservation land as a plus.

“It’s not going to be, one day, a massive concrete jungle,” she says. “From a community standpoint, it is a fantastic location.”

Brothers Miles and Ryan Harris still live and work out of their parents’ Alachua County home, but as their business grows, they’ll be moving out. The brothers used their background in digital painting to create a popular touch-screen illustration app called Sketchable.

“We always enjoyed it. We always thought it was cool to create graphical images,” says Miles.

“We tried to engineer an app that is really good for an introductory artist but also for an intermediate artist.”

GAINESVILLE — Exactech is spending $5.9 million over 10 years for naming rights to the University of Florida’s basketball arena, now known as Exactech Arena at the Stephen C. O’Connell Center. Exactech develops bone and joint restoration products and biologic materials. » The Vanad Group, a Dutch software company, will open its U.S. headquarters in Gainesville. » SharpSpring sold its SMTP relay business unit to Electric Mail for $15 million. SharpSpring says the sale is part of a strategy to focus on its cloudbased marketing automation business.

JACKSONVILLE — The National Hockey League approved the application by Jacksonville businessman Bill Foley for an expansion franchise in Las Vegas. Foley is chairman of Fidelity National Financial as well as vice chairman of Fidelity National Information Services and executive chairman of Black Knight Financial Services, two companies that were spun off from FNF. An 18. 8-acre riverfront site adjacent to downtown Jacksonville, where the Florida Times-Union has been published for half a century, is up for sale. » The owner of salvage rights to the wreck of the RMS Titanic filed for Chapter 11 bankruptcy in Jacksonville. Premier Exhibitions owns about 5,500 Titanic artifacts with an estimated value of $218 million but is restricted from selling them. Premier says it can pay off its debts by selling just a handful of those artifacts, if the court will allow it. » A company with a digital job-hunting app called randrr is establishing a development office in Jacksonville with plans to create up to 200 software development jobs by 2018. » Convenience store operator Wawa plans to open 30 to 40 stores in the Jacksonville area. APR Energy is getting $450 million from the Ministry of Energy and Mining of Argentina for two five-year projects.» APR, which builds interim power plants around the world, was struggling financially before being acquired by a consortium of private investment firms in February. The Argentina deal is the largest contract in its history. » Chairman Jay Stein says Stein Mart is likely to be bought at some point. Stein, who controls 31% of the stock, isn’t retiring any time soon, but the 70-year-old wants to make sure any eventual buyer keeps the business going after he leaves. » Convergys is cutting 163 jobs that were tied to a contract with AT&T. Convergys, which provides outsourced customer care, still has about 1,200 employees in Jacksonville.

ST. AUGUSTINE — The St. Augustine Shipyard, a marina and commercial development project on the San Sebastian River, opened at the site of a former boat manufacturing center. The developers hope to attract a variety of retail and shopping tenants at the site southwest of the city’s his toric district.

» David Dunn was named president and CEO of Carolina Casualty, a Jacksonville-based commercial truck insurance company that is a subsidiary of W.R. Berkley.

An annual survey of 12,000 professionals in a variety of occupations by Thumbtack.Com ranked Jacksonville ninth out of 78 U.S. cities for “small-business friendliness.” Among the criteria for Jacksonville: