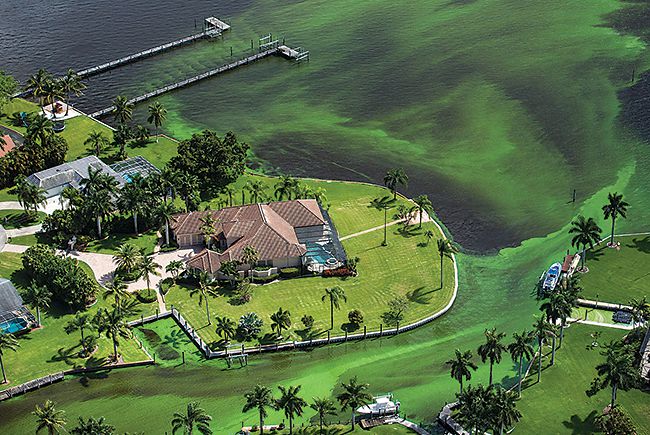 Professor Walter G. Bradley at the University of Miami is looking for a link between ALS and algal blooms such as this one in the Indian River Lagoon. 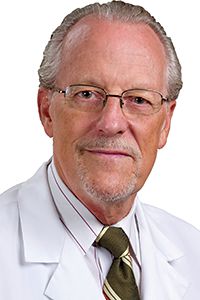 This year’s devastating algal bloom in the Indian River Lagoon has renewed interest in a hypothesis being pursued by scientists in Florida that a toxin produced by the bloom may be an environmental cause of ALS, Parkinson’s and Alzheimer’s [“Medical Mystery,” November 2011, FloridaTrend.com].

Most cyanobacteria, a name for the blue-green algae, produce a neurotoxin called BMAA. In a study reported this year, scientists from the Institute for Ethnomedicine in Wyoming and the University of Miami found that monkeys given high doses of BMAA developed the pathological hallmarks — specific kinds of plaques and tangles in their brains — found in humans in a post-war outbreak of ALS in Guam and in people with Alzheimer’s. The study buttresses the argument for a BMAA-neurological disease tie.

Professor Walter G. Bradley, emeritus chair of the neurology department at the University of Miami, recently collaborated with scientists based in Dartmouth, N.H., on a Centers for Disease Control contract to look for a link between ALS patients and exposure to cyanobacteria and other environmental pollutants in New Hampshire, Vermont and Florida. It was in Dartmouth years ago that a researcher first noticed that many of his ALS patients lived along lakes.

The CDC contract had expired by the time Florida released geographic data from a state registry of ALS patients. Bradley, lamenting the two years it took to get the data from the state, hopes to get funding to do a detailed review. A preliminary review suggests — though it doesn’t rise to statistical significance — that ALS has a higher frequency in ZIP codes on the lagoon than in ZIP codes in the same county farther from the water. He would like to overlay the prevalence of cyanobacteria and other environmental pollutants in Florida with the incidence of disease to look for correlations. Meanwhile, under a new CDC contract, researchers are looking for linkages in northern Ohio where blooms in Lake Erie occur.

Bradley says he expects BMAA will turn out to be one of several environmental contributors to ALS, Parkinson’s and Alzheimer’s. “We don’t want to start a panic, but it nevertheless is a significant risk for the population,” he says.

The state Department of Health, in its advisories, cautions against drinking water or swimming in the bloom’s presence due to the risk of skin irritation or gastrointestinal distress. As for BMAA, the department advisory acknowledges that it’s being investigated by researchers as an environmental factor for neurologic disease, but says, “no proven connection has been found between cyanobacteria and ALS/Alzheimer’s illness.”

South Africa native and UF grad Regan Marock, 31, moved from property management into cybersecurity, forming SPC Cyber Security this year with a group of investors. The 10-employee company hopes to do $1 million in first-year revenue, banking on winning business by offering a team of experts, such as former U.S. and Israeli government agents, to assess companies’ vulnerabilities.

DEERFIELD BEACH — Early childhood education company Learning Experience signed a lease to move its headquarters from Boca Raton to the Hillsboro Technology Center in fall 2017. A new flagship preschool also will be at the site.

FORT LAUDERDALE — JPMorgan Chase gave the Greater Fort Lauderdale Alliance Foundation $126,000 to create an assessment of the skills gap in the county. The report, to be developed with Career- Source Broward, aims to lead to a boost in training for high-demand jobs. » SunTrust Banks sold its namesake downtown office property, two buildings totaling 270,000 square feet on Las Olas, to Miami-based Steelbridge Capital for $87 million, the largest downtown sale by square footage and value this year. Steelbridge plans to renovate the property, which is 77% occupied. » Crystal Cruises will return to Port Everglades, Broward’s seaport, in fall 2017 with two ships totaling eight sailings. » Silver Airways pilots ratified a new union contract extension with the airline that included pay raises.

FORT PIERCE — St. Lucie County commissioners approved putting a referendum on the Nov. 8 ballot allowing residents to vote on whether to allow slot machines at pari-mutuels in the county. The only pari-mutuel in the county, Fort Pierce Jai Alai & Poker, advocated for a referendum. A yes vote would bring slots to the county only if the Legislature changes state law to allow slots in counties that have voted in favor of it. Slots are legal only in Miami- Dade, Broward County and at tribal casinos. Six other counties in Florida have voted to allow slots.

LAKE WORTH — GL Homes is paying $17 million for land at the Fountains Country Club where it plans to build 470 homes.

PALM BEACH — Chicago hedge fund billionaire Ken Griffin is developing a mansion on Blossom Way, south of the Southern Boulevard bridge. Forbes says the Citadel founder is worth $7.5 billion. Last year, Griffin paid $60 million for two penthouses at Faena House in Miami Beach, which he then listed for sale for $73 million.

POMPANO BEACH — Stonegate Bank plans to acquire five-branch, Davie-based Regent Bancorp for $40 million, bringing Stonegate to $2.7 billion in assets and making it the ninth-largest bank headquartered in Florida. Stonegate also said it was issuing the first MasterCard usable in Cuba.

VERO BEACH — The city hired South Bay Construction to begin dismantling its 1960s-era waterfront power plant. The city wants to turn the site to other uses.

NASA and SpaceX announced Friday they are preparing for the company’s first flight test, with astronauts, to the International Space Station (ISS) as a part of their Commercial Crew Program.

Column: South Florida employers should brace for the potential impact of Covid-19

Already, the outbreak has impacted South Florida businesses that rely on products imported from Chinese factories. The tourism and real estate markets will likely feel the effects as well.

Fewer manatees are dying in Florida

Manatees and the people that love them can rejoice around news that a lot fewer manatees died in 2019 compared with the year before.

Tampa Bay couple heading back to US after cruise ship quarantine

Tampa Bay couple Phil and Gay Courter have been quarantined on the Princess Diamond since Feb. 4. Once they get back to the U.S., they will be quarantined for 14 days.