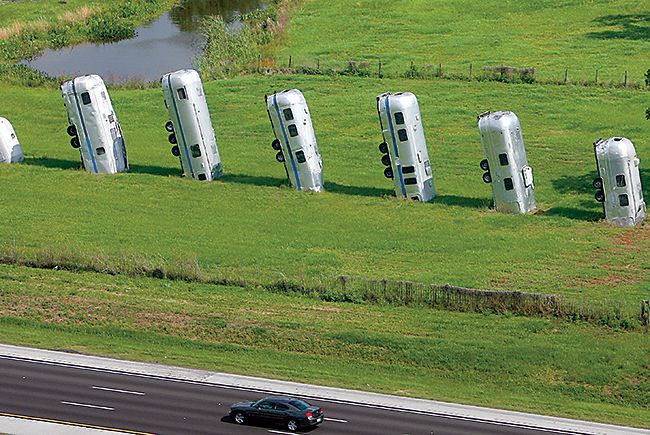 Airstream Ranch, as seen from the south side of I-4, just west of exit 14 near Dover, Florida.

Art installation is up in the Air(stream)

Both pros and amateurs use wood and charcoal to build fire and smoke; the difference is the size (and price) of the toys.

The hottest grills of the new millennium are mechanical devices of steel from Spanish and Latin cuisines. At least a dozen Florida restaurants have invested in such fancy cookers ($10,000 and up) for steaks, flatbreads, fish, vegetables, fruit and the new culinary darling, charred octopus tentacles.

The new grills come in two varieties. One features a flat oven grill attached to a flywheel that looks like it came from a medieval scullery. Muscle power lifts the grill and its food as much as a foot above the fire. The best-known brand is Grillworks, which has a Grillery model that stretches for almost six feet in Beachcraft, the new Miami spot of Food Network star Tom Colicchio.

The other, the Josper, comes directly from Spain, invented 30 years ago in Barcelona. It’s a remarkable combination of grill, smoker and oven that has had restaurateurs’ mouths watering at trade shows. Star chefs Michael Mina and Jose Andres both have Jospers in their back yards.

The Josper has a metal cabinet with two grill shelves over the fire. The food cooks quicker, at temperatures of 800 degrees and more, and imparts more smoky flavor.

Justin Pachota of Venice ogled one a few years ago while planning Fins, his family’s newest restaurants: “We needed something that would really distinguish us.” He made room in the budget and the open kitchen.

Now hosts show off the grill to guests walking to their tables, and the menu boasts a long Josper section.

» At Fins at Sharky’s in Venice, the crew loads the Josper with fruitwood in the morning to smoke vegetables and some meats, then turns to charcoal for grilling steaks, veal chops, Berkshire pork, cobia and salmon. “We grill meat, fish, vegetables, fruit, everything. We grill watermelon,” says Justin Pachota.

» At Klima, which styles itself Mediterranean and Catalan, the Josper does prime beef, Iberico ham, Amish chicken, Carolina pork chops, Wagyu oxtail and, of course, asparagus.

» Global Peruvian Coya (also in London and Dubai) fires up rib-eyes, pork belly and a variety of anticucho skewers on its Josper.

» Bulla, the Coral Gables gastrobar, added a Josper oven for steaks, merluza and Spanish ham when it opened its new Doral location.

» At the new Argentine-owned El Churrasco in the Four Ambassadors property, there are two Jospers humming.

» Latin chefs are not the only fans. At Hakkasan, chef Jian H. Loo turns to the Josper for seafood. He likes the “delicious charcoal smoky flavor” it gives to his Sha Cha sea bass and specials of scallops and tiger prawns.

» At Beachcraft, New York’s TV chef Tom Colicchio has installed a huge flywheel-geared Grillworks for a seafood-driven menu. The charcoal grill turns out grilled queen snapper and black grouper as well as rack of lamb and dry-aged rib-eye.

» At Osprey Tavern in Orlando, a Ravenous Pig alum uses his Josper to turn out smoked trout and wood-fired cobia with New Country trimmings like pickled cauliflowers and summer corn cake.

» When chefs Michael Mina and Don Pintabona created innovative Locale Market and FarmTable Kitchen in St. Petersburg, they were so big on grilling that they installed three flywheel grills. They serve both the grocery take-out buyers and the upscale upstairs restaurants. Chef Jeffrey Hileman couldn’t be happier: “What’s better than cooking over live fire?”

» Clearwater restaurateur Frank Chivas was so thrilled by his first taste of food from a Josper at a restaurant show that he wanted to buy the display model and take it home. When he couldn’t, he decided to build his own. Now he has two, is working on a third and is experimenting with uses from clams to oysters bienville, baked snapper and the likes of champagne porgy at his Salt Rock Grill. For Chivas, the advantage is pure taste. “It’s not great — it’s outstanding.”