Florida Polytechnic University received a $5-million gift last year to develop a Health Care Informatics program. Harish Chintakunta, an assistant professor of electrical engineering, is a lead investigator. The university says the primary mission of the initiative is to improve public health in part by providing easy access to different types of biometric measurements and tests. One example: Florida Poly students and faculty, using expertise in electronics, signal processing and statistics, are designing sensors that can be used in studies of sleep disorders. 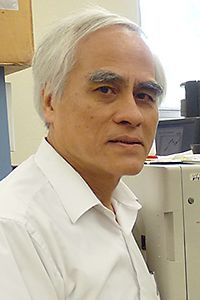 A project called “Multi-Element Scanning Thermal Analysis,” developed by a team of Florida A&M researchers, bested 20 other universities, including Harvard, at the National Science Foundation Innovation Corps competition in Atlanta. The competition challenged researchers to transfer their findings into products or processes that could benefit society and to show broader applicability. The rapid MESTA technology can, in just half an hour, analyze and characterize the materials in complex compounds — detecting everything from chemicals in the air to identifying whether a white powder is anthrax.

Running without shoes can help improve a person’s memory, according to a study published by researchers at the University of North Florida. The results followed an experiment in which 72 participants ages 18 to 44 ran both barefoot and with shoes for approximately 16 minutes. The experiment found a roughly 16% increase in working memory performance following the barefoot run but no significant increase after the run with shoes. People running barefoot must pay closer attention to where they are placing their feet to avoid stepping on objects that might hurt them. It’s possible the more intensive use of working memory required in barefoot running leads to the increase in cognitive performance.

Researchers at the University of South Florida have identified and tested an extract from a sponge they found in Antarctica that may help fight MRSA bacterial infections. MRSA — methicillin-resistant Staphylococcus aureus — can be spread in places such as hospitals, nursing homes, gyms and locker rooms. MRSA is particularly problematic because it can cause infections throughout the body and resists traditional antibiotics. USF chemistry professor Bill Baker and colleagues isolated an extract from the sponge and produced a chemical they call “darwinolide” that selectively affects biofilms, a collection of bacteria naturally resistant to antibiotics. Darwinolide, the researchers say, eliminates more than 98% of MRSA cells within these biofilms. USF ranks among the top 25 public universities in the nation for research expenditures and ninth among U.S. public universities in patents awarded.

Florida Southern College was chosen as one of a small number of universities to participate in Yale University’s Small World Initiative. A group of biology students worked to discover antibiotics that can combat infections that are adapting to long-used antibiotics. They cultivated bacteria from soil samples and noted which demonstrated the potential to produce compounds that would kill other bacteria. A subsequent conversation between the biology professor overseeing that project and a chemistry professor prompted the chemistry professor, Deborah Bromfield Lee, to expand on the research. An organic chemistry specialist, Lee and her students are now trying to isolate and identify the specific compounds with antibacterial properties.

Going Up: Johns Hopkins All Children’s

Construction is under way on a seven-story, $85-million research building at Johns Hopkins All Children’s Hospital in St. Petersburg. The facility will house the research activities of the hospital’s Heart Institute, Cancer and Blood Disorders Institute, Institute for Brain Protection Sciences, and Maternal, Fetal and Neonatal Institute. About 200 researchers and staff will work at the building, expected to be complete in 2018. The hospital conducts about 300 studies each year; more than half are clinical trials. 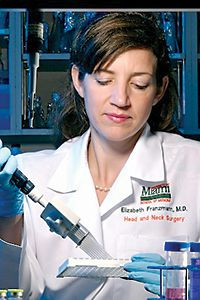 Elizabeth Franzmann, director of head and neck research at the Sylvester Comprehensive Cancer Center, part of the University of Maimi Health System, has developed an oral rinse test, the first of its kind, that measures a biomarker helpful in detecting oral cancer at its earliest stages. The test will be available to clinicians this year.

Meanwhile, the UM Miller School of Medicine’s Bascom Palmer Eye Institute has developed a gene therapy for vision loss associated with mutations of mitochondria — the part of cells that act as the cells’ digestive system and powerhouse. There had previously been no way to insert DNA into the mitochondria until a discovery by John Guy, director of the Bascom Palmer Ocular Gene Therapy Laboratory.