Schmieding and Erika married in 1981 and moved into an apartment in Munich’s Olympic Village, where he created the company logo and designed some of the first surgical instruments for arthroscopic knee surgery on a simple drafting board.

At the time, arthroscopic surgery was in its infancy, and surgeons lacked specialized tools that would work through the tiny, less invasive incisions they make to repair knees and other joints. Schmieding designed the tools himself, got German instrument craftsmen to make them and manned his own booth at medical conferences. He set a stress-inducing goal of attending surgery with every orthopedist in Munich.

“When I drive through downtown Munich today, I still get the same physical reaction of impatience and stress. When you are a young entrepreneur on a mission, sitting in traffic is not something you deal with well,” he wrote.

Schmieding’s widely acknowledged mastery of surgery — knowing “every product and surgical procedure cold,” as he said — gave him a bond with doctors. Fairly early on, he hit on the idea of setting up facilities where doctors could practice arthroscopic surgery with his instruments on anatomical models.

In Munich, German taxes took 63% of Schmieding’s income, but he saw a return in a stable social system, good roads and funded health care. Munich also offered low crime, culture “and the best beer and food anywhere,” he recalled.

But to build the business Schmieding knew he needed to be in America. His wife, who had stayed home to raise their two children, agreed to move, provided the family return for at least two months a year to Germany.

Schmieding looked for a “resort environment” in the U.S. that would be hospitable to visiting physicians and potential employees. He chose Naples, where he had visited with relatives. And in the summer of 1991, after a decade in Germany, he moved back to America. 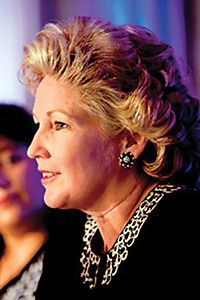 As president and CEO of Collier’s Economic Development Council, Susan Pareigis “inspired us to hire an engineer and actually start manufacturing,” Schmieding says. Pareigis recalls Schmieding as a “unique talent” who always had a vision of what he wanted.
— Susan Pareigis

What happened next is vintage Schmieding. He rented space for his company in Naples from the owner of a company that was also in the surgical field. They talked of joining forces, but after a few weeks, Schmieding sat down with his would-be partner and landlord and told the man there would be no merger. Their business practices and ethical standards were too different. He had made a list.

The man told Schmieding to get himself and his startup out that very day. A loyal aide, a secretary and Schmieding packed. A thunderstorm soaked them and their boxes. The secretary left in disgust. “A dreadful day,” he later said.

In its early days in Collier, Arthrex designed instruments and taught surgeons to use them but did little manufacturing. Susan Pareigis, then president and CEO of Collier’s Economic Development Council, called on Arthrex as part of her job helping local companies expand. Schmieding later said she “inspired us to hire an engineer and actually start manufacturing.”

Pareigis recalls Schmieding as a “unique talent” who always had a vision of what he wanted.