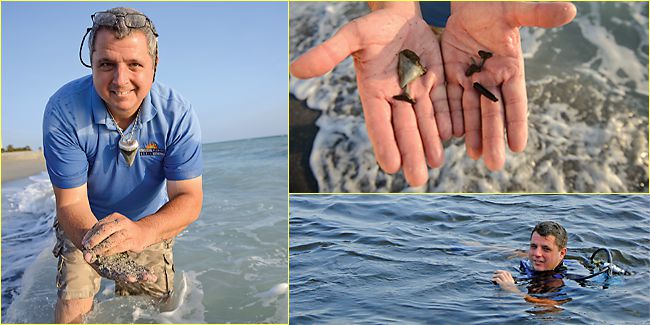 Chuck Ferrara likes to hunt for shark teeth about a mile offshore. "Every chance I get, I look," says Ferrara, who wears a megalodon tooth as a necklace.

Dental work: A bed of bones off Venice, Florida

An area off the coast of Venice draws amateur paleontologists from everywhere.

During Chuck Ferrara’s senior year at Charlotte High School, his marine science class went on a field trip to search for fossils. He found some small shark teeth, a turtle shell and a tooth from an extinct species of horse. A pretty good haul, but nothing about the experience gave him any indication that he’d become a fossil-obsessed amateur paleontologist.

Some 15 years later, a friend heard that the Peace River in DeSoto County, located in Florida’s phosphate-rich Bone Valley, was a good place to fish and find fossils, and he wanted to check it out. Ferrara went along.

“That’s when I found my first ‘meg’ tooth,” Ferrara says, referring to a molar from the giant megalodon, an extinct species of shark that grew to 60 feet and had teeth as long as seven inches. The tooth he found was gray at the blade and black at the root. It was nearly 2 inches long.

Ferrara, now 51 and president of the Southwest Florida Fossil Society, still goes after megalodon teeth whenever he can — only he does most of his searching now off the coast of Venice.

The abundance of small, fossilized shark teeth there along the Sarasota County coast between Osprey and South Venice have gained the city a reputation as the “Shark Tooth Capital of the World.”

Ferrara doesn’t prowl the beaches, however — the megalodon teeth he seeks are about a mile offshore in a meandering vein of fossils nicknamed the “bone bed.”

Richard C. Hulbert Jr., vertebrate paleontology collections manager at the Florida Museum of Natural History in Gainesville, says the sediments making up the sea floor directly offshore from Venice were deposited between 3 million and 10 million years ago in coastal waters similar to those today. In those days, megalodons congregated off the southwest coast to breed, with the females giving birth to 6-foot-long pups in the shallow waters near the shore.

Over millions of years, their teeth settled alongside the bones of scores of other prehistoric land and aquatic species. Ferrara says the fossil-hunting site is actually an ancient riverbed, formed when the peninsula’s land mass extended as many as 90 miles farther into the Gulf of Mexico.

Along with the megalodon teeth, the bone bed contains the bones of animals that lived in and along the ancient river — sabre-toothed tigers, Columbian mammoths, bear dogs, American lions, gomphotheres (an elephant-like creature) and early camels and horses. The sweet spot for searching is less than a mile offshore in 25 to 30 feet of water.

Most weekends, when the weather is good and the water is clear — too much rain makes the water too cloudy to find anything — boats line up over the bed and divers descend to look for fossils.

At the Venice Area Chamber of Commerce — where visiting children get packets of shark teeth as a welcome-to-Venice gift — president and CEO John G. Ryan says the chamber can’t quantify the impact that the prehistoric shark teeth have on the local economy, but he says the teeth are a significant tourism driver.

“It has been part of our culture and history for years,” says Ryan, who grew up in Venice. “It separates us. You look at Sanibel with the seashells. You look at Siesta Key with its extremely white highquality sand. Well, we have another avenue, and that’s the fossilized materials, including shark teeth.”

Every time Ferrara dives the bone bed, he says he comes back with “a bag of teeth.” He wears one of his discoveries around his neck — a 3 3/8th-inch-long megalodon tooth that he had mounted in silver.

He has larger teeth — and plans to find even bigger ones.