On April 20th, Floridians will celebrate Taxpayer Independence Day 2016, the first day of the year where taxpayers are no longer working to pay off their tax bill but are working for themselves. This symbolic date, calculated by Florida TaxWatch, assumes that every dollar earned from the start of 2016 went to pay taxes at all levels of government. 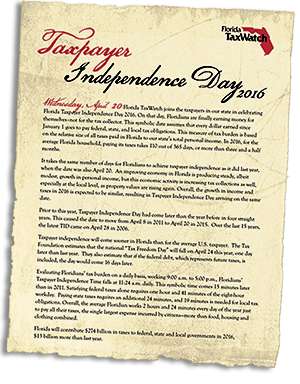 “Taxpayer Independence Day reflects that Floridians' personal income growth is keeping pace with the growth in the taxes they pay, meaning it is not taking longer to achieve independence this year. ,” said Florida TaxWatch President and CEO Dominic M. Calabro. ““Florida is lucky to be blessed with a great tax climate that stimulates business growth and keeps money in the pockets of hard-working families. Florida TaxWatch hopes that Floridians will celebrate Taxpayer Independence Day by recognizing the impact that different levels of government have in their daily lives and in their paycheck.”

For more on how Florida’s tax burden stacks up against the rest of the nation, read Florida TaxWatch's How Florida Compares: Taxes.