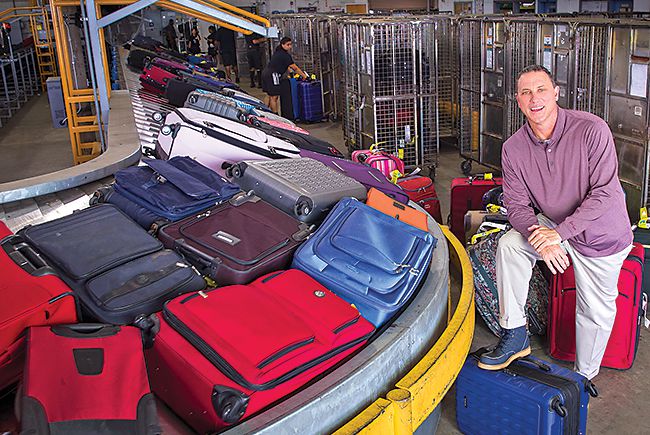 Craig Mateer's Bags Inc. has baggage-handling contracts with all the major airlines and cruises.

In the bag: Handling luggage on a grand scale

The first big break of Craig Mateer’s career came in 1989, when the Baltimore Gas & Electric Co. Bought Church Street Station, the then-thriving nightlife district in downtown Orlando. Someone at the company decided it was a bad idea to have cars driving close to the crowds and that the center should hire a valet service.

A friend called Mateer, who founded his first company, City Nights Valet, in 1990. He kept his day job for a time, appraising commercial real estate during business hours and then parking cars from 6 p. m. to 2 a.m.

Mateer, 51, who drives a white Cadillac Escalade with the seat reclined to a nearly 45-degree angle, recalls the time fondly. Not yet 25, he was working outside, staying in shape and always had a pocket full of tips — “just crushing,” he says.

His company began to grow, adding valet contracts with other bars downtown and then a hotel across from the Orlando Magic arena. Then came the next big break: Harris Rosen, the successful Orlando hotelier, decided to outsource the valet operations at his Rosen Plaza hotel, next to the Orange County Convention Center. The famously frugal Rosen, who usually prefers to do things in house, interviewed Mateer and came away impressed with the younger man’s business sense and confidence. Mateer was hired again.

That’s how it was that Mateer was having lunch with Rosen one day a few years later on a patio overlooking the pool at Rosen’s office — a few converted motel rooms in a former Quality Inn. The pair was talking about a controversial proposal to build a light rail system linking I-Drive with Orlando International Airport. Rosen opposed the project, arguing that it would be an eyesore. But if it were to be built anyway, who, they wondered, would carry the bags between train stations and hotels?

County commissioners killed the light-rail idea (thanks in part to Rosen’s opposition). But the baggage idea took life.

Using money from City Nights Valet, Mateer began to develop the concept for a baggage-handling business for passengers flying in and out of Orlando that he dubbed Bags Inc. Planning ground to a halt after the terrorist attacks of Sept. 11, 2001. But tighter security measures in the wake of the attacks led to longer lines and bigger crowds at airports,which became desperate for new ways to alleviate congestion. That’s exactly what Mateer was proposing to do with his new business, which would take, screen and sort bags at remote facilities, creating more space in the main terminal.

Rosen helped out when needed. At one point, the newly formed Transportation Security Administration offered Mateer $2 million to help set up his company. Rosen advised him to turn the money down.“I said, ‘Don’t even think about accepting it,’ ” Rosen says. “You will be indebted to them for the rest of your life. They will just climb all over you and give you absolutely no peace.

Mateer told the feds that he didn’t want their money. Then, he says, his company ran into trouble getting approval from the government to start operating. So Rosen called U.S. Rep. John Mica, a Republican from Winter Park who happened to chair the aviation subcommittee in the U. S. House of Representatives.

Mica ordered TSA representatives to a meeting with Mateer and Rosen at the Orlando airport.To hear Rosen tell the story, Mica began by asking everyone if they thought the concept for Bags was a good one. When it was clear they all did, Mica responded, “In 48 hours, I expect Bags to receive appropriate accreditation and approval.”

Mica, for his part, says he doesn’t recall the precise details of the meeting. Though he adds, chuckling, “I used to give people deadlines all the time. That’s one way you hold their feet to the fire.”

With the bureaucracy jolted into action, Bags Inc. began doing business in 2003, starting out at Rosen’s convention center hotels. It’s been growing rapidly since.

Today, Bags has contracts with every major airline and cruise line as well as big hotel operators such as Walt Disney World. It can handle luggage at any commercial airport around the country and has begun some work in Canada and Europe.

Beyond its core business of remote check-in services in hotel lobbies and aboard cruise ships, Bags now operates skycaps at some airports, manages individual delivery systems for airlines and works directly with corporate meeting clients, including Walmart and Chick-fil-A. Bags has erected temporary check-in facilities at convention centers, parking garages and rental-car counters — it can do so anywhere, Mateer says, that has an internet connection. City Nights Valet is still a part of the business,though it’s now called Bags Parking & Guest Services.

Its biggest market remains tourist- rich Orlando, where Bags sorts luggage in a former Delta Air Lines hangar across the tarmac from the main terminal. The company’s headquarters is a few miles away in an office park behind SeaWorld Orlando — a space that also includes a 24-hour-a-day command center where clocks display the times in Anchorage, San Francisco, Chicago, Orlando and Copenhagen.

Mateer remains the sole owner of Bags, which he says did $152 million in sales last year.

Now, after gleaning customer-service lessons from the likes of Rosen Hotels and Disney, Bags is becoming a consumer business of its own. The company recently launched Bags VIP, offering to deliver travelers’ bags to any destination within 100 miles of more than 250 U.S. airports. The service starts at $29.95 for one piece of luggage.

“We get to peer into these big companies, and they treat us like a little brother. And we’re pretty adept at pulling knowledge out,” Mateer says. “I’m an entrepreneur that would not be here without the hospitality industry.”

Various companies, from hotels to technology firms, feed off of the tourism and entertainment industry.

The U.S. economy was a mess in the aftermath of the Sept. 11, 2001, terrorist attacks.
Companies were downsizing and cutting costs, and workplace morale was low. Brett Reizen sensed an opportunity. A 23-year-old just two years out of the University of Miami, Reizen started a business developing entertainment-focused corporate-benefits programs through which employers could offer employees perks like discounted tickets to theme parks, concerts and plays. Today, Reizen’s Entertainment Benefits Group is one of the largest privately held travel-and-entertainment providers in the world. The company, with investors that include Cirque du Soleil and Broadway theater-operator the Shubert Organization, bought the largest competitor of its corporate programs division in November. Headquartered in Miami, Entertainment Benefits Group also has offices in Las Vegas and New York, plus a new $8-million ticket and operations center in Orlando. The company doesn’t disclose finances, but Reizen says revenue has grown by more than $200 million in just the past two years. “I don’t see that slowing down,” he adds.

Accesso Technology Group, a technology solutions company serving the leisure industry, has its largest North American office in Seminole County. The company recently signed a seven-year deal with Merlin Entertainments Group, the world’s No. 2 attractions operator by visitor traffic. Under the deal, Accesso will install its onsite ticketing e-commerce technology at more than 100 Merlin-owned attractions around the world, including Legoland theme parks, Madame Tussauds wax museums and Sea Life aquariums. Accesso, founded in Lake Mary in 2008 and acquired in 2012 by British amusement-tech company Lo-Q, which then took the smaller firm’s name, also recently signed a 10-year contract with Six Flags Inc. The company does more than $90 million in annual sales and employs 300 people worldwide, including 130 in Lake Mary.

Seventy years ago, Jack McKibbon Jr. Opened a motor court northeast of Atlanta that eventually become one of the earliest Holiday Inn franchisees. A generation later, that single motel has ballooned into Tampa-based McKibbon Hospitality, with a portfolio of 84 hotels that it manages for 14 brands — plus another six in the pipeline — and more than 2,500 employees. One of the first Marriott franchisees to use the now-ubiquitous Courtyard brand, The company says it has grown by focusing on second-tier urban markets where its projects sometimes serve as downtown-revitalization catalysts. Now run by John McKibbon III, the company is focusing on developing and managing “lifestyle hotels,” a category that includes brands such as Marriott’s AC Hotels and Starwood’s Aloft.

Hotel magnate Richard Kessler is adding to his Kessler Collection of themed boutique hotels by repurposing a 104-year-old, decommissioned power plant along the riverfront in his hometown of Savannah, Ga. The $200-million project will revitalize a block that has long been closed off to the public. The project will include 450 hotel rooms, rooftop bars, wine-blending programs, an art gallery, a spa, restaurants and a concert lawn. Orlando-based Kessler’s Florida hotels include three in central Florida — Grand Bohemian Hotel in downtown Orlando, the Castle Hotel on International Drive and the Bohemian Hotel Celebration — and the historic Casa Monica Resort and Spa in St. Augustine. The Savannah project is expected to be complete in 2018.

Institute for Hospitality in Healthcare Orlando

In an idea developed partly by Orlando hotelier Harris Rosen, the University of Central Florida has established the first program in the country pairing advanced medical and tourism-management degrees. Through the program, students enrolled in UCF’s College of Medicine can take an extra year and earn an additional master’s degree from the university’s Rosen College of Hospitality Management. The goal is two-fold, says UCF med school dean Deborah German: To train health care providers in the customer-service mentality of the tourism industry and to help foster Orlando’s growth as a destination for medical tourism. UCF hopes to eventually build an Institute for Hospitality in Healthcare near the med school in Orlando’s Medical City community. German says UCF has begun talking to potential donors for the project, though the school will likely ask the state to contribute funding as well.

The non-profit Quantum House in West Palm Beach, which provides lodging to families of kids being treated at Palm Beach Children’s Hospital and other facilities in Palm Beach County, is expected to complete in May a $5-million expansion that will more than double its capacity to more than 1,000 families each year. The addition will boost Quantum House’s inventory of multi-room family suites from 10 to 30 and provide more common space for residents.