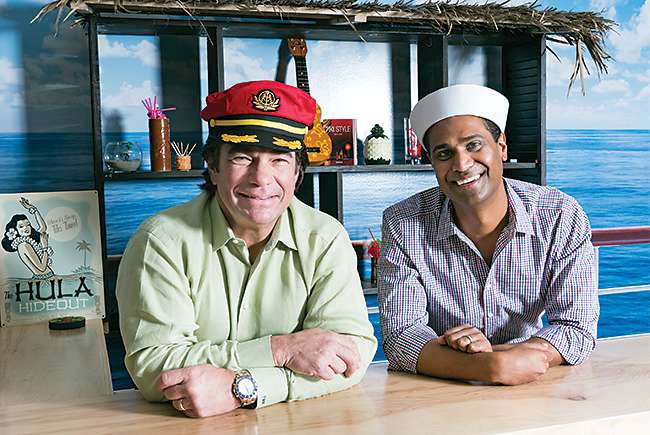 In a suburban office building near Fort Lauderdale, a small group of executives is creating a cruise line from scratch as part of the Virgin Group.

One of the biggest startups in Florida history began in earnest five years ago, on a patio overlooking the golf course at the Doral Hotel & Country Club in Miami- Dade County.

Seated at a table was Nirmal Saverimuttu, a Zambian-born, Australian- raised investment banker then in his mid-30s. Since 2006, he had been helping lead North American development efforts for the Virgin Group, the collection of companies and brands founded by British entrepreneur Richard Branson.

The company and Saverimuttu, who had helped launch both an airline and hotel chain for Virgin, were ready to move on to their next target: The cruise industry.

Across from him was Tom McAlpin, a Miami native and Florida State University alum who, at 52, had spent more than two decades near the top of some of the world’s most successful cruise companies. Only a handful of people on the planet were better prepared to build a cruise business. An accountant who once ran the planning department at Royal Caribbean, McAlpin was part of the founding team behind the last major cruise launch in North America — Disney Cruise Line.

Over beers on a hot, sunny day, the two sketched details of how Virgin might break into the cruise business by combining its brand with luxury ships promising unique experiences and high-end Customer service. The pair left the meeting believing they could create a cruise line unlike anything the industry had seen before — and make a lot of money in the process.

After the meeting, McAlpin, who had left Disney in 2009, returned to his job running The World, a condo cruise ship based in Fort Lauderdale. Saverimuttu set out to search for investors. But the pair continued to confer, referring to each other as “Red Sea 1” and “Red Sea 2,” after the code name Virgin had given to the secret project.

“We had a joint passion to see if we could create something,” Saverimuttu says today.

Few industries entail higher barriers to entry than cruising.New ships cost between $500 million and $1 billion and usually take at least three years to build. The cruise business requires an elaborate infrastructure — reservations, inventory management, safety and security, menu development and more. All those systems must be operational before the boats can begin sailing and generating revenue.

The industry is dominated by three giant competitors that control more than 90% of the North American cruise market, according to research by UBS Securities: Carnival (46%), Royal Caribbean (31%) and Norwegian (15%). Disney, at No. 4, has 3% of the cruise market.

Joining that club meant raising lots of money. Within two years after the beers with McAlpin in Doral, Saverimuttu was on the upper floors of the John Hancock Tower in Boston, delivering a presentation to representatives from Bain Capital, the $75-billion investment firm co-founded by 2012 Republican presidential nominee Mitt Romney.

Bain had been researching cruise possibilities for years, says Ryan Cotton, a managing director at Bain’s private equity division who focuses on the consumer and retail segments.Bain was interested in two options. One was river cruising. The other was traditional ocean cruising — but Bain wanted only a built-from-scratch cruise line with new, higher-margin ships.(New ships can be designed with a higher percentage of balcony staterooms, which bring higher rates than other cabins, and more space devoted to revenue-producing areas such as shops and casinos.)

Bain felt that the new line would only make sense if paired with a well-established brand that consumers already trusted. As it happened, that’s just what Virgin was offering.

After the initial meeting, Virgin and Bain began to do more targeted research. Bain, Cotton says, loved what it saw.

Generally speaking, the U.S. market breaks down like this: 40% of U.S. travelers have been on a cruise in the past five years and intend to go on another sometime in the next five; 40% have never been on a cruise but would be willing to try; 20% say they will never cruise.

The researchers also asked consumers to choose from five cruise ships — identical in every way except for their brands — and express a preference. Cotton says more respondents chose the Virgin-logoed ship than the ones branded for Carnival, Royal Caribbean, Norwegian or Disney.

“There’s a huge shadow market for millennials, gen-Xers and gen- Yers who say, ‘I understand why people go on cruises.’ And that’s where Virgin comes in,” Cotton says. “Virgin has created a very consistent set of brand values — fun, hip, sexy, cool, adventurous and glamorous. When you ask a customer, ‘would you be interested in a Virgin cruise?’ they don’t need to see the deck plans of the ship, they don’t need to see a lot of photos, they don’t need to ask what the itinerary is. They know what Virgin is and stands for.”

Bain signed on as the lead investor and was soon followed by a mix of institutional and family investors including the government of Abu Dhabi, an asset management fund overseen by the Princely House of Liechtenstein, and the American architect Graham Gund.Altogether, Virgin Cruises raised $700 million. The company is believed to have borrowed between $1 billion and $1.5 billion more.

With financing in place, Virgin Cruises formally launched in December 2014. Bain got three of the six seats on the board of directors, one of which went to Cotton.

As part of Virgin Cruises’ unveiling, Virgin announced the company would be based in the Miami or Fort Lauderdale area and would start with two ships. But it said almost nothing else — not even when the ships might begin sailing.

Little wonder. About that time, the company consisted of exactly three employees — McAlpin, named CEO; Saverimuttu, who had moved over from Virgin Management to become Virgin Cruises’ chief commercial officer; and Chief Marketing Officer Nathan Rosenberg.While a fourth hire, former Virgin Atlantic exec Dee Cooper, was under contract at the time, Virgin Cruises’ first order of business was clear: Build a bigger team [“All Aboard,” page 72].

As for the actual ships, all the company had was what’s known as a “general arrangement plan,” or a GAP — a document outlining how space will be allocated on a ship for areas such as cabins, restaurants, entertainment venues and crew quarters. Cruise lines have to complete a GAP in order to negotiate a construction price with a shipyard — an important variable when raising capital.

It didn’t take long for the Virgin team to sail into its first storm.

The company’s original plans called for the line to begin with two ships that could carry about 4,200 passengers each. But as Virgin conducted more detailed market research in late 2014 and early 2015, company executives realized that its potential customers were leery of so-called “mega-ships.”

The company organized focus groups in Chicago, New York and Florida, asking consumers what they wanted a Virgin cruise ship to be like and what experiences they wanted on board. Rosenberg says the overwhelming majority expressed a preference for ships that were big enough to have plenty to do but not so large that passengers would be surrounded by crowds everywhere they went.

At the same time, the existing mass-market cruise lines were already building ever-larger 4,000- and 5,000-passenger ships, which are cheaper to build and more profitable to sail on a per-berth basis. Last spring, Carnival announced an order for nine ships, at least four of which will have an industry-record capacity of 6,600 passengers each.