House flipping is making a comeback in Florida

Nationally, there has been little change in house flipping in the past year, but Las Vegas is approaching historical highs, and flipping is making a comeback in several Florida markets.

House flipping is a practice that some believe is an indicator of an over-heated housing market. Nationally, it made up a stable of all home sales during the past year, mirroring a steady increase in home prices.

The good news: that flip rate is roughly in line with the non-housing bubble years and well below the 8.6% flip rate of all home sales in 2006. The concern: there are some hot spots. While stable nationally, we’re having déjà vu: flipping is making a comeback in places such as Las Vegas and Miami, which saw high levels of flipping activity during the previous boom.

Moreover, there’s evidence that house flippers may be sitting out in some markets. That’s because rapid price growth in some expensive markets may be making that initial buy too costly for house flippers.

House flipping is a unique housing market metric for two reasons. First, it is a speculative undertaking where investors are betting on turning a profit, and has historically occurred at high rates just before a market peaks. Second, flipping usually entails removing a home from a particular price point in the market and moving it to a higher price point through improvement. That movement creates competition for homebuyers who may be looking to build sweat-equity on their own. But flipping activity also provides improvements to the housing stock for buyers who don’t have time or cash to improve a home themselves.

Flipping reached a peak in 2006, but is it actually on the rise again? We set out to answer that question by looking at all the home sales in the last year from, and found that: 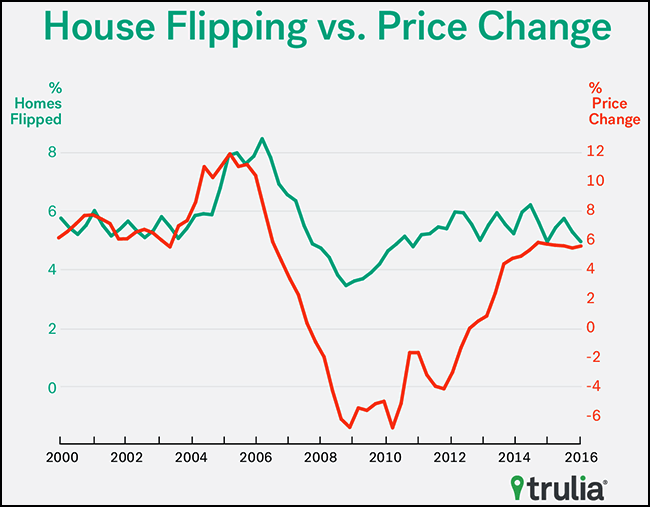 Flipping Down, but Not Out

Selling houses for a gain over a short period generally requires modest price growth at minimum. Even though flippers can add value by improving the quality of a home, rising prices provide a safety net when taking on a project. When prices are rising faster, flippers have greater opportunity to come out ahead even if the project doesn’t go according to plan. Over the past year, price gains have remained relatively stable, and so have flips. This is stark contrast to rising year-over prices from 2003-2006, when flips increased sharply from 5% to nearly 9% of all home sales.

Though flipping has remained relatively stable nationally, flipping activity varies significantly across individual markets. Las Vegas, Nev. leads the pack with 10.4% flips, followed by Fresno, Calif. and Daytona Beach, Fla., with 7.6% and 7.3%, respectively. Detroit and Louisville, Ky., have the lowest share of flips at less than 2.5%.

How has flipping changed at the metro level over the past year? Similar to the national numbers, markets with the highest flipping activity generally had higher price appreciation than markets with the lowest.

In particular, flipping is heating up in Florida markets. Of the 10 housing markets with the largest increase in flips over the past year, six are in the Sunshine State. Miami leads the country, increasing 1.7 percentage points. Other flipping hotspots in Florida include Daytona Beach, Jacksonville, Orlando, Tampa, and Cape Coral, which have seen increases in flipping activity between 0.8 to 1.4 percentage points.

While Florida cities have increased the most, bubble-phobes fear not: none are close to their 2000-2015 peak. For example, Miami is at less than a third of its peak flipping point of 20.5%, Daytona Beach is just over half, and Orlando, Tampa, Jacksonville, and Cape Coral are just over a third. Of the non-Florida metros making the list, only Las Vegas and Birmingham, Ala., are within about 80% of their 2000-2015 peak.

We’ve also found an interesting exception between prices and flipping. While there is a strong correlation between price changes and flipping activity over the past year, the relationship doesn’t necessarily hold for those with the smallest change in flipping activity. When grouping our markets by flipping rates, not only do fast-flip markets have the largest average price increase, but the low-flip markets also had large price increases. In other words, places with the biggest increase and biggest decrease in flipping activity over the past year experienced higher than normal price gains.

Why is this? Flipping requires three things: (1) a market where home prices are appreciating, (2) a cheap supply of homes to buy and flip, and (3) ready buyers to purchase the flip.

Flipping a house in appreciating, but expensive markets may be more difficult because:

In conclusion, the U.S. housing market isn’t flipping out just yet, but there are signs that some areas are approaching their previous flipping points. While this isn’t of concern in places where flipping activity is low relative to the national average, such as Birmingham there are signs that markets such as Las Vegas may soon reach an historical high level of flipping. 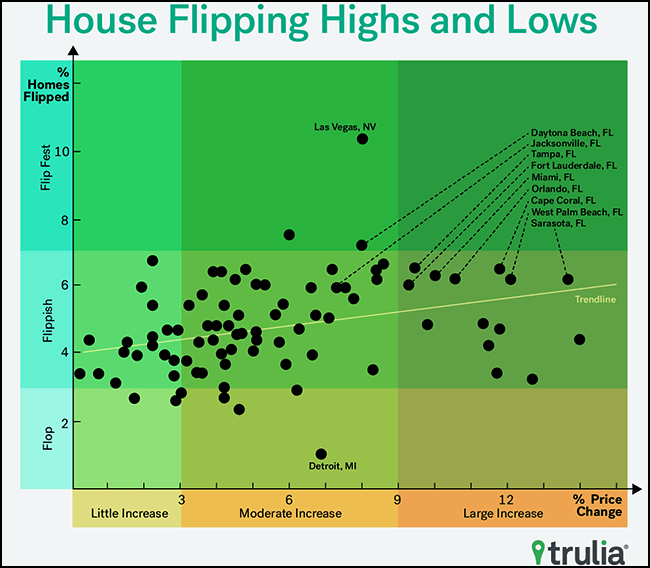 We differentiate between two different types of property flips: a traditional flip, which is the purchase of a house at market rate and selling it at a higher market rate price, because of improvement to the property and/or rising prices; and a clearance flip, which is the purchase of a distressed house at a discount because of a forced sale, such as a foreclosure, followed by a resale at market rate. We do not include clearance flips in our measure of flipping since our goal is to estimate the relationship between prices and flipping in a relatively normal, non-distressed housing market. As a result, our definition of a flip is a property that sold twice in a twelve-month period, in which both transactions are considered arm’s length.